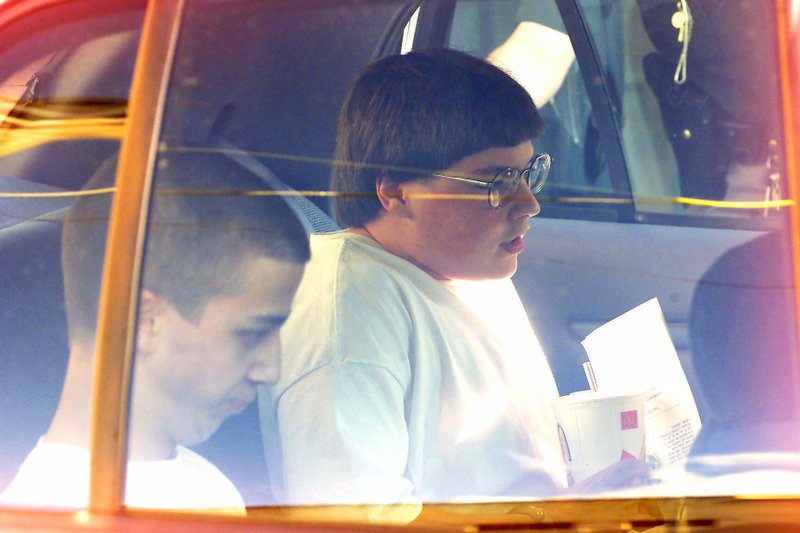 JONESBORO -- The two youngsters convicted of killing four Westside Middle School students and a teacher in 1998 blamed each other for initiating the schoolyard shooting rampage, depositions released Tuesday indicate.

The depositions were taken during civil litigation against Mitchell Johnson and Andrew Golden in 2000, 2007 and 2008 but were sealed until Craighead County Circuit Judge John Fogleman released them after a Monday hearing in Jonesboro.

Jonesboro attorney Bobby McDaniel, who represents the families of the slain in a civil lawsuit against Johnson and Golden, sought the release -- along with a monetary settlement -- to provide any insight into why the two would shoot at their classmates and adults.

Fogleman awarded each family $30 million on behalf of Johnson and Golden, but McDaniel said he knows they will never see any money from the settlement.

"The purpose was, hopefully, to provide psychologists, sociologists, school administrators and police any idea of what a school shooter looks like," McDaniel said. "We wanted them to see if any students show any traits, to be vigilant."

Neither Johnson nor Golden attended Monday's hearing. Johnson is in a Texas federal prison serving time for theft and drug convictions. Joe Perry, an attorney from Marianna, and Danny Glover, a Wynne attorney, who represented Golden also were not present at the hearing.

Golden is living in Missouri and changed his name to "Drew Grant." Grant is the maiden name of his grandmother, Golden said in his deposition.

Police say Johnson hid in a brushy area along the school's perimeter and Golden went inside the middle school building, triggered a fire alarm and ran outside to join Johnson. When children and staff exited the building, the two began firing at them with high-powered rifles.

A Craighead County circuit judge adjudicated the two of capital murder Aug. 11, 1998, but because they were youths, they were incarcerated until they each turned 21 and then were released.

During his adjudication hearing, Mitchell Johnson said he did not intend to hurt anyone and said he aimed over their heads just to scare them.

Johnson said Golden told him he was "tired of people messing with him."

"He was going to prove a point that he's not a pushover," Johnson said of Golden. "He asked me to help him to obtain a vehicle to get to and from where he needed to go. And that was supposed to be that only."

Johnson said he told Golden, "I didn't want nobody getting hurt."

In the deposition, Johnson admitted to pointing a loaded .38-caliber pistol at Golden's head when Golden stopped running from the schoolyard after killing the five.

"I told him he had gotten me into this mess and he was going to get me out," Johnson said.

Golden said Johnson showed him a knife in front of Golden's house on the morning of March 24, 1998, and said he would kill Golden and his family if he didn't go with him that day.

Golden said Johnson had talked about how he wanted to "get some people back" on other occasions, but Golden thought Johnson was joking.

"I just kind of blew him off," Golden said. "He was always talking about gang stuff and this and that and I never really paid much attention to it."

Both said in their depositions that they didn't remember much of the shooting.

Johnson said in his 2000 deposition that he was in a "daze" and was not "intentionally aiming at anybody." He did, however, admit that he warned two students not to go to school that day because "something bad might happen."

In his April 2, 2007, deposition, taken in Fayetteville where Johnson lived at the time, McDaniel questioned Johnson about the implications of pointing a weapon at someone.

"You knew that if somebody was shot with a rifle, it would kill them, didn't you?" the attorney asked.

"Back then I didn't understand that, though," Johnson replied.

"I didn't really think all the way through and I didn't understand that, you know, what I was doing potentially put people in harm, and if they did get killed, they don't come back."

Johnson admitted to being angry with teachers. He was placed in in-school suspension a few weeks before the shooting when he balked when a teacher tried to take a hat from him that he had worn in school.

He also cursed at a teacher in 1998 after he sneaked from a classroom to talk to a friend and the teacher apprehended him.

Johnson admitted in his 2000 deposition that he was angry at a coach who kicked him off the school's football team after the coach discovered Johnson had purposely cut his left arm in a self-mutilation episode.

Johnson denied, though, that anger led him to slay others.

He said he recalled pointing the .38-caliber pistol at a construction worker who was atop the middle school roof when the shootings occurred. Johnson said he saw the worker pointing at him and he shot at the worker twice. The worker was not injured.

Johnson said he continued to deal with the results of his actions after his release from prison, saying in his 2007 deposition that he received death threats and was fired from at least two jobs in Northwest Arkansas after employers learned who he was.

He said he regretted the shooting and was sorry for those who lost family members.

"I deal with this every day of my life," he said.

Johnson said he met with Brandy Foreman, the stepsister of Natalie Brooks, in July 2006 and spoke with her. He said he apologized to her.

McDaniel said Tuesday that he hoped the release of the depositions could shed some light onto why students go on rampages.

"School bullying is a factor in several of these school shootings," he said. "These two are the only two surviving mass shooters. If this helps stop one from happening in the future, it's worth it."

Both Johnson and Golden said in their depositions that they are remorseful.

After his release from the Alexander juvenile facility in 2008, Golden got a tattoo of a Bible verse. Written on him was Romans 3:23, which reads, "For all have sinned and fallen short of the glory of God."

Johnson, too, evoked religion in trying to explain why he fired the shots March 24, 1998, saying he planned on becoming a Seventh Day Adventist minister after his release in 2005.

"Why did you shoot these people?" McDaniel asked in his 2007 deposition.

"Honest to God, sir, I don't know," Johnson replied. "I haven't found that answer out yet."