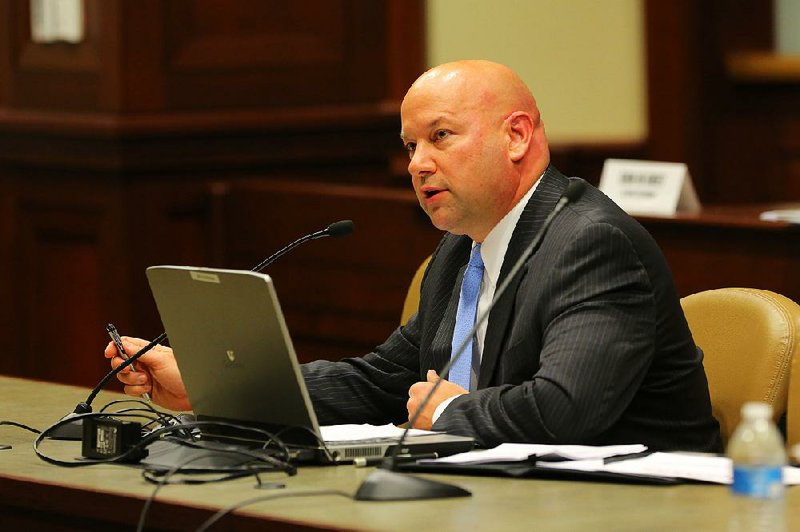 The Arkansas Scholarship Lottery's proposed seven-year extension of its multimillion-dollar gaming contract with Greece-based Intralot Inc. cleared a legislative panel Thursday, after the lottery's director said the agency would probably pay more if it sought bids.

On another matter, lottery Director Bishop Woosley told the Legislative Council's lottery oversight subcommittee there is no denying that a new law allowing retailers to accept debit cards for their customers' lottery ticket purchases is helping sales. But he also said it would take a few months to determine the overall impact.

In addition, the Department of Higher Education reported that the number of new applications for the lottery-financed Arkansas Academic Challenge Scholarship for the coming school year increased by more than 5,000 over last year, to more than 30,000.

The current contract with Intralot Inc. expires Aug. 14, 2019. The proposed extension would stretch that to Aug. 19, 2026, without seeking bids from other vendors. But the company's reduced-rate offer would take effect the first of next year.

Intralot is offering to reduce the rate it charges the lottery on scratch-off and draw-game ticket sales from 2.165 percent to 2.11 percent. If the Legislative Council approves the proposal today, it would mark the second contract extension and rate reduction since Intralot was first awarded the lottery's business in 2009.

The initial seven-year contract provided for Intralot to be paid 2.45 percent of net sales.

In late 2014, the contract was extended for three years until Aug. 14, 2019, and Intralot reduced its rate from 2.45 percent of ticket sales to 2.165 percent, effective July 1, 2015. That rate reduction saved the lottery about $3 million to $3.5 million over this period, Woosley said Thursday.

Woosley said the proposed contract extension would save between $2.1 million to $2.2 million with the reduced rate, based on the lottery's revenues remaining flat at about $450 million a year, though he hopes the revenues increase.

"My guess is if we put it out for bid based on the last two or three years within the industry, we're probably going to get a higher rate," he said. "The trend in the industry is to go up."

Intralot has held the Arkansas lottery's contract for "online lottery game services and lottery gaming system and services," including 2,500 retailer terminals, since 2009. The firm was the only bidder in 2009.

"They knew that they couldn't beat anyone on price and therefore they didn't bid," Woosley said Thursday.

Asked about GTECH's spokesman's comment, Woosley said in an email that "my point wasn't to state that no other company would bid should this be put out for bid.

"It was simply given industry pricing trends and the risks of disruption to our current business plan, we would be very unlikely to receive a better deal," he said. "No vendor has told me since this extension became known that they oppose it and the contract should be put out for bid. It is common knowledge within the industry that we are attempting to negotiate an extension of our online contract."

GTECH's "refusal to bid previously based on the weight given to price is an indication that they would be very unlikely to bid with a competitive rate," Woosley said.

A spokesman for Scientific Games said last week that the company would consider submitting a bid if the lottery sought bids, but it's not protesting the lottery's decision not to seek bids.

During the legislative subcommittee's meeting, John Skrimshire, vice president of commercial operations for lottery consultant Camelot Global Services, assured lawmakers that "we are 100 percent comfortable with the details of this proposal."

"We think it is the best deal for the state," he said.

Under the terms of the proposed contract extension, Intralot would provide 2,200 new terminals and printers to accommodate "the reasonable needs of the retailer base." The terminals would be deployed on a mutually agreed-upon staggered basis that would begin in August 2019.

"Just anecdotally, looking every morning at our sales, I don't think you can deny that it's had a positive impact for sure," he told lawmakers.

Woosley said he's heard fewer complaints in recent months from retailers about the cost of debit card transactional fees, as many retailers realized the change could lead to getting more business beyond lottery ticket sales.

"I probably received two or three calls this week from retailers who feel like they might be losing customers because other people are taking debit cards. If I just had to say, it looks like a lot more people are taking them than we anticipated. But we probably won't know that until about three months," Woosley said.

The number of new applications for Arkansas Academic Challenge Scholarships increased from 25,556 for last school year to 30,883 for the school year starting this fall, the state Department of Higher Education reported to the legislative subcommittee.