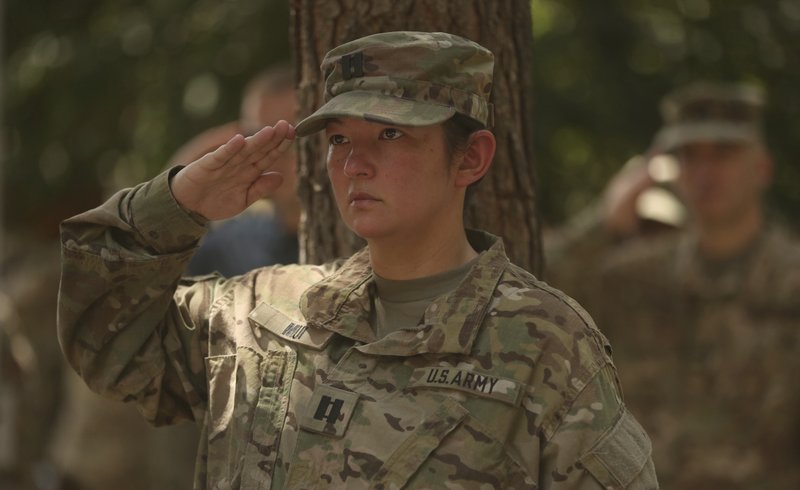 In this Saturday, July 15, 2017file photo, A U.S. soldier salutes during a change of command ceremony at Resolute Support headquarters, in Kabul, Afghanistan.

KABUL, Afghanistan -- A U.S. soldier was killed and several others were wounded in a battle with Islamic State militants in eastern Afghanistan, the U.S. military said.

The military said in a statement that several Afghan soldiers also were wounded in the fighting Wednesday in the Achin district of Nangarhar province, a militant stronghold. It did not specify how many were wounded.

The Utah National Guard said the American soldier who died was one of its members and that 11 other guardsmen were among the wounded. The names were withheld pending notification of family members.

The soldier was clearing a building when a booby trap exploded, killing him and injuring the others, Utah Gov. Gary Herbert said.

The wounded soldiers were evacuated.

The family of the slain soldier identified him as Aaron Butler, 27, of Monticello, Utah. His father, Randy Butler, said in a statement that he was a champion high school wrestler who became a Green Beret after graduating from the U.S. Army Special Forces Qualification Course with honors in 2016.

Islamic State militants have gained a foothold in recent years in Afghanistan, where they have battled U.S.-backed government forces as well as the more-established Taliban.

The Islamic State affiliate largely consists of disgruntled former Taliban insurgents and has clashed with the larger group over leadership and ideology.

Elsewhere in Afghanistan, a suicide car bomber killed three civilians while trying to attack an Afghan army base in the southern Helmand province late Wednesday.

Omar Zwak, spokesman for the provincial governor, said the attacker and three other militants approached the base before guards opened fire on them, killing the three who were on foot. Three soldiers were wounded in the blast.

And in southern Zabul province, the Taliban attacked a police base, killing eight policemen. A police official, Asif Tokhi, said the attack started Wednesday night, along the Zabul-Kandahar highway, where the base is located.

The battle continued into Thursday morning, he said. Along with the eight killed, three other policemen were wounded, and 12 Taliban fighters also were killed, Tokhi added.

The Taliban made no statements on the latest attacks.

On Tuesday, the Taliban released an "open letter" to President Donald Trump, reiterating their call for the withdrawal of U.S. troops from Afghanistan after 16 years of war and warning against new U.S. military buildup in Afghanistan.

Trump has so far resisted the Pentagon's recommendations to send almost 4,000 more troops to expand training of Afghan military forces and bolster U.S. counterterrorism operations. The deployment has been held up over broader strategy questions, including how to engage regional powers in an effort to stabilize Afghanistan.

Defense Secretary James Mattis said Thursday that the Trump administration has almost reached a decision on a new approach for the war in Afghanistan.

He gave no hint of what the strategy would look like. But in remarks at the State Department, Mattis told reporters that Trump will confer with his national security team today at the Camp David presidential retreat in Maryland, and said the talks "will move this toward a decision."

"We are coming very close to a decision, and I anticipate it in the very near future," he added.

Information for this article was contributed by Mirwais Khan, Lindsay Whitehurst and Robert Burns of The Associated Press.