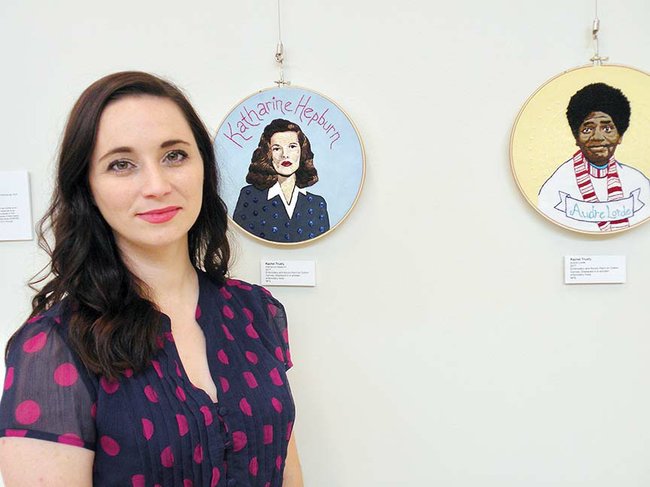 Rachel Trusty of Conway shows two pieces of her fiber art in the exhibit at the William F. Laman Public Library in North Little Rock — Katherine Hepburn and Audre Lorde.

Showing their fiber art in the All-Women Fiber Arts Exhibition in the gallery of the William F. Laman Public Library are Deborah Kuster and Rachel Trusty, both of Conway; Melissa Gill of Little Rock; and Holly Laws of Mayflower. The show is free and open to the public through Aug. 31.

“This diverse exhibition … includes sewing, embroidery, dyed fabrics, felting, stitching, quilting and much more,” said Trusty, who is curator of the show.

“The use of sewing and soft materials is historically tied to women’s work and handicraft,” said Trusty, who teaches art at the University of Arkansas Community College at Morrilton. “These techniques were used during the feminist art movement in the 1970s and ’80s by women artists to redefine what women’s art could be.

“This show is a follow-up to last spring’s Form in Fiber: A Nine-Woman Fiber Arts Show, which was held in the gallery at the Argenta Branch of the William F. Laman Library System.”

Following is a look at the participating artists:

Trusty, a native of Russellville, has two pieces in the show — Audre Lorde and Katharine Hepburn. Both are embroidery pieces on canvas in wooden hoops.

“These two pieces are part of a new project I am doing called embroid(HER). The embroid(HER) project is an embroidery portrait series that seeks to celebrate strong, influential women from a variety of backgrounds and fields and their contributions to society,” Trusty said.

“Audre Lorde was a civil rights activist, writer and poet who pushed women to make feminism in the 1960s and ’70s more inclusive of women of color and women from different classes,” Trusty said.

“Katharine Hepburn was a four-time Academy Award-winning actress who was known for her fierce independence and broke barriers with her sometimes masculine fashion style.

“The project is sponsored by the Polly Wood Crews Scholarship I received from the Arkansas Chapter of the National Museum of Women in the Arts this year. To see the portraits and follow the progress of the series, viewers can visit the Instagram page @embroidher for details and images. Images from this project and other projects of mine can be seen at

Kuster, a professor of art at the University of Central Arkansas, has two pieces of fiber art in the show — Loss and Fragile.

“Each of my hand-woven, pieced, quilted, formed and embellished vessels has ‘feet’ of clay,” she said. “These are tenderly created to suggest our human experience — one of brokenness and weakness, yet beloved by God.”

Kuster has been involved in the field of art education for 40 years, having taught art to all ages in schools and museums. She has been a professor in art education at UCA since 2003.

Though she has been weaving since the mid-1990s, Kuster began piecing her hand-woven textiles into art quilts in 2006. She said piecing provides the means for more complex color and pattern combinations than her traditional loom allows.

For more information on Kuster and her work, visit her website www.deborahkuster.com.

“My imagery is informed by my interest in personal transformation and my personal experience as a Buddhist practitioner,” she said.

Gill said her works are a combination of media, including intaglio and relief printmaking, drawing, painting, collage and embroidery.

“The interplay of organic and geometric patterns with the silhouette is a metaphor for the energetic dynamics of experience,” she said.

For more information on Gill and her art, visit her website melissagillart.com.

Laws, who teaches three-dimensional design and contemporary media in sculpture at UCA, has one piece in the show — Triple Messerschmitt Me 163 Komet. It is made of cotton gauze and felted merino wool.

“After fabricating a three-dimensional model of a Messerschmitt Komet, I found myself fascinated by the dynamic shadows cast by the form,” Laws said. “I drew dozens of cast-shadow planes on paper, experimenting with different drawing media, but I wasn’t satisfied with such a flat, graphic representation. It was than that I began searching for different ways to create a more three-dimensional line on a nontraditional drawing surface.

“The Messerschmitt was chosen as a charged object that holds collective memory. The skeletal line of this World War II aircraft, distorted and blurred by the felting process, coupled with the shroudlike draped gauze, speaks to the repercussions of our actions and faint recollections of the human condition.”