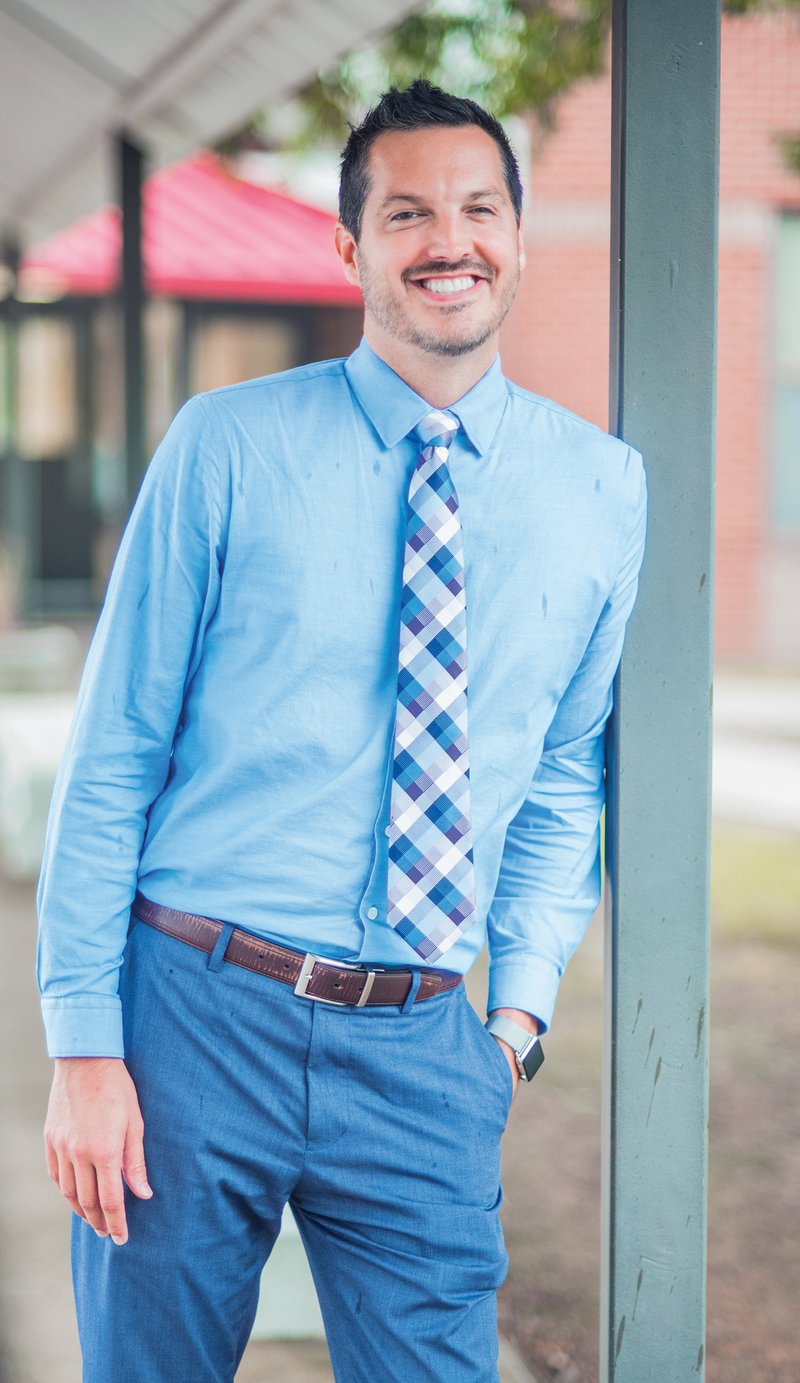 Andy Sullivan stands outside of Ward Central Elementary School in Cabot. Sullivan was named principal of the school in June after serving as its assistant principal since 2013.

Since 2000, Andy Sullivan has dedicated much of his time to teaching and impacting students in the Cabot School District.

“No matter how many years I do this, the first day of school is as exciting today as it was 18 years ago. I still have trouble sleeping the night before,” he said.

Sullivan was named principal of Ward Central Elementary School in June after serving as its assistant principal since 2013.

The new position will allow him to level the playing field for teachers, students and their families, he said.

“I am but a cog in the awesome machine that is Ward Central Elementary. Sometimes the machine needs a boost of energy or an adjustment in direction. Either way, it is my responsibility to provide the accountability and support for getting us to our destination,” he said.

Ward Central is the only school in the district without a 72023 ZIP code, he added, making the school a central part of the community in Ward.

Sullivan said this year’s school theme is “Walking through these doors to a better me.”

“We want anyone — students, parents, teachers and admin, whoever they may be — to leave a little better that day than when they walked in,” he said. “Maybe they made a new friend, learned a new math strategy or left more excited about life. Whatever it is, they are leaving to, hopefully, make the world a better place.”

The school will make a point to recognize positive moments on social media, in the school’s morning news program and individually with students throughout the week, he said.

Sullivan said this will be his fifth year at Ward Central, and he has enjoyed seeing all of the kindergartners grow into fourth-graders.

As a born-and-raised Cabot Panther and a 1996 Cabot High School graduate, Sullivan said, he has a lot of pride for his school district.

“We’re well-known for our system, and I take pride in being a part of that system,” he said. “You want to continue that legacy, and you want the pride that others have taken in the district over the years to continue. There’s pressure to keep the bus moving, as they say. You want to make sure that it stays impressive.”

Sullivan said he decided to become a teacher at a young age to ensure that children are treated with kindness and fairness.

“I wanted to make sure that every kid gets a fair shake at life and is treated the way we ourselves would want to be treated,” he said.

Sullivan received his bachelor’s and master’s degrees from the University of Central Arkansas in Conway and also completed the English as a Second Language endorsement program.

He taught math at Cabot Middle School North from 2000-2005 and first grade at Northside Elementary School in Cabot from 2005-2008.

He then became the district’s pre-K and parent involvement coordinator from 2008-2011 before becoming assistant principal at Central Elementary School in Cabot until 2013.

“I’m certified for first through eighth grades, and I love being able to watch kids grow from kindergarten through the fourth grade. You have them for a longer period of time. As you get into some of the secondary schools, you have them for just a few years at a time. I love teaching first grade because they come in essentially not knowing how to read, and they can leave you reading a chapter book. You see such growth over just one year,” he said.

Sullivan said he enjoys traveling, whether it’s a road trip to Fayetteville or overseas to Italy.

Travel has given him an appreciation for different cultures, viewpoints and people, he said.

“I love a good road trip. I did a two-week West Coast road trip once, traveling from Seattle all the way down to Los Angeles. It was a lot of fun,” he said.

Food is another passion of his, he said, and he considers eating a hobby.

“I love looking at a menu, really everything about the experience of food. It’s part of that idea that you’re exploring new things. Food is a great way to do that,” he said.

“Going to a new restaurant, trying a new dish — as long as it doesn’t involve me actually cooking — I’m a fan.”

Sullivan said he is also cares deeply about his teachers and sees them as family members.

His parents, Don and Sue Sullivan, are the two people he admires the most for their hard work and loyalty.

“My first job as a 14-year-old was with my dad,” he said. “I was the official filler of the water cooler and ‘helped’ on the construction site. I was given $1 an hour and was highly overpaid. If a kid ever needs motivation for going to college, put him on a construction site all day in July. He’ll either love it or get focused on school.”

Sullivan said his siblings were also Cabot High School graduates, and he has nieces and nephews currently enrolled in the district as well.

“When I think of my parents, they remind me that you don’t have to be a teacher to have an impact on individuals. They both selflessly serve others. If the world had a few more Don and Sue Sullivans, it’d be a fine place to live. I hope I can provide that same example for my Ward Central staff and community,” Sullivan said.

He has been a member of Mount Pleasant Missionary Baptist Church in Cabot since he was a baby and remains an active member.

He is also active in the Cabot Panther Foundation, a nonprofit organization that benefits the schools in the Cabot School District.

Sherri Jennings, principal of Westside Elementary School in Cabot, said Sullivan has a caring heart for the community of Cabot and the children in it.

Sullivan and Jennings worked together at Central Elementary in 2012 and have continued to work together for five years on the Cabot administration team, she said.

“Mr. Sullivan is someone who is full of energy. Due to the fact he is always smiling and one of the most positive people I know, he is always surrounded by parents, students and friends. He works very hard to build a culture at his school where everyone is valued and relationships are built,” she said.

Jennings said Sullivan promotes his school and students anytime he has the opportunity.

“He goes above and beyond by creating morning news for his school, coming up with schoolwide rallies to excite students about learning and by serving on the Arkansas Association of Elementary School Principals Board. By serving on the board, he is not only helping the kids at Ward Central, he is helping make education better for all students in Arkansas,” she said.

Jennings said she cannot think of anyone more deserving of the position at Ward Central Elementary than Sullivan.

“I am so excited for the kids at Ward Central because they have such a strong positive male role model that they can look up to and that will advocate and provide the best education possible.”

Sullivan said the best advice he can offer students entering Ward Central Elementary for the new school year is to discover his or her passion.

“It’s never too early to find what you’re passionate about,” he said. “Find your passion, and explore as many interests as possible while you’re young.

“I wish I had realized how much fun it truly is to be a kid back when I was one. We’re always in such a hurry to grow up and get older.”