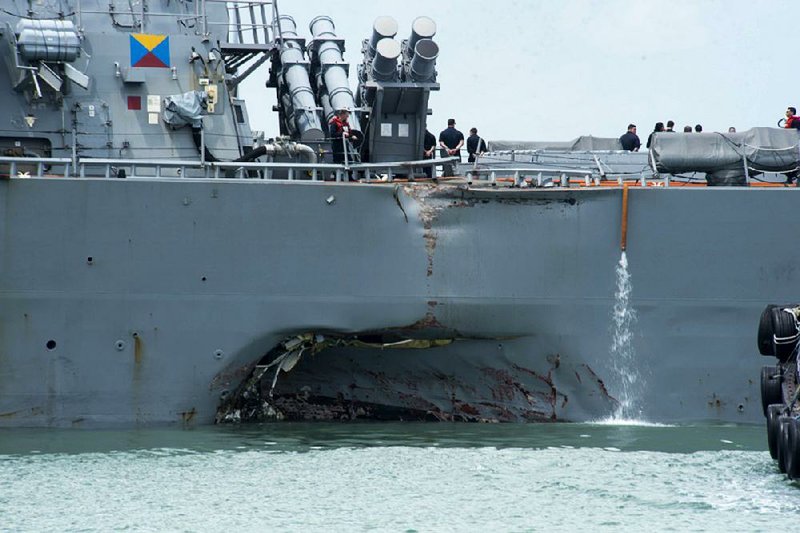 Damage to the portside is visible as the guided-missile destroyer USS John S. McCain steers toward Changi naval base Monday in Singapore after a collision with the merchant vessel Alnic MC.

SINGAPORE -- The U.S. Navy ordered a broad investigation Monday into the performance and readiness of the Pacific-based 7th Fleet after the USS John S. McCain collided with an oil tanker in Southeast Asian waters, leaving 10 U.S. sailors missing and others injured.

It was the second major collision in the past few months involving the Navy's 7th Fleet. Seven sailors died in June when the USS Fitzgerald and a container ship collided in waters off Japan.

Vessels and aircraft from the U.S., Indonesia, Singapore and Malaysia were searching for the missing sailors. Four other sailors were evacuated by a Singaporean navy helicopter to a hospital in the city-state for treatment of nonlife-threatening injuries, the Navy said. A fifth was taken to the hospital by ambulance after the destroyer arrived in Singapore under its own power, the Maritime and Port Authority of Singapore said.

Families of the ship's crew members waited through the night in the United States, hoping for news of their loved ones.

"No word yet but some sailors have called on cell to families," wrote Marla Meriano, the mother of Meghan Meriano, a 24-year-old electrical officer, in a Facebook post. "Thank you for all the prayers and remarks," she wrote two hours later. "God has his plan and we serve him."

A top Navy official said an investigation will be launched.

"It is the second such incident in a very short period of time -- inside of three months -- and very similar as well," Adm. John Richardson, the chief of naval operations, told reporters at the Pentagon. "It is the last of a series of incidents in the Pacific fleet in particular, and that gives great cause for concern that there is something out there we are not getting at."

Richardson ordered a pause in operations for the next couple of days to allow fleet commanders to get together with leaders, sailors and command officials and identify any immediate steps that need to be taken to ensure safety.

Richardson said the series of accidents in the Pacific "demands more-forceful action," adding that there is "great cause for concern that there is something we are not getting at." He ordered Navy fleets across the world to take a day or two within the next week to review their procedures and training to make sure they are operating safely.

More significantly, Richardson ordered a separate investigation into how the Navy prepares its forces to operate in the Pacific.

"This will include, but not be limited to, looking at operational tempo, trends in personnel, materiel, maintenance and equipment," Richardson said. "It also will include a review of how we train and certify our surface warfare community, including tactical and navigational proficiency."

Richardson said he wanted a broad and diverse team reviewing operations as part of the investigation, with the Navy inspector general's office, the Navy Safety Center and outside experts all assisting. The probe will be led by Adm. Philip Davidson, who leads Fleet Forces Command in Norfolk, Va.

The McCain is an Arleigh Burke-class destroyer -- named after the father and grandfather of Sen. John McCain, R-Ariz., and nicknamed "Big Bad John" -- that had been on its way to a routine port visit in Singapore after patrolling in the South China Sea.

It has a crew of 23 officers, 24 chief petty officers and 291 enlisted sailors, according to the Navy's website.

The ship's command master chief -- the unit's most senior enlisted sailor -- is an England, Ark., native. Master Chief Petty Officer Dedrick Walker reported to the McCain in 2016, according to the Navy's website.

Sen. McCain said in a statement Monday that he agreed with the actions Richardson is taking.

"Our sailors who risk their lives every day, in combat and in training, deserve no less," the senator said. "I expect full transparency and accountability from the Navy leaders as they conduct the associated investigations and reviews."

Richardson was asked whether the collision was intentional on either side or was the result of cyber sabotage. He said there was no indication that the collision was intentional and said cyber questions would be explored just as they were during the investigation of the USS Fitzgerald collision. Later, Richardson tweeted that there were no indications of cyber intrusion or sabotage, but that the review will consider all possibilities.

The USS McCain had been heading to Singapore on a routine port visit after conducting a sensitive freedom-of-navigation operation last week by sailing near one of China's man-made islands in the South China Sea. The collision east of Singapore between the 505-foot guided missile destroyer and the 600-foot Alnic MC ripped a gaping hole in the destroyer's hull.

The destroyer was damaged on its port side aft, or left rear, in the 5:24 a.m. collision about 4.5 nautical miles from Malaysia's coast but was able to sail on to Singapore's naval base. Malaysia's Maritime Enforcement Agency said the area is at the start of a designated sea lane for ships sailing into the busy Singapore Strait.

A photo tweeted by Malaysian navy chief Ahmad Kamarulzaman Ahmad Badaruddin showed a large rupture in the McCain's side near the waterline. Janes, a defense industry publication, estimated the hull breach was 10 feet wide.

Another U.S. naval vessel, the amphibious assault ship USS America, arrived in Singapore and deployed Osprey aircraft and Seahawk helicopters. It was helping with damage control on the McCain and with the search for the missing sailors.

The Navy today said divers were assessing the hull damage, and that the USS America was supporting the work on the USS McCain to pump out the water and restore auxiliary systems.

One of the injured sailors, Operations Specialist 2nd Class Navin Ramdhun, posted a Facebook message telling family and friends he was fine but would need surgery for an arm injury. He told The Associated Press in a message that he couldn't say what happened. "I was actually sleeping at that time. Not entirely sure."

The Singapore government said no crew members were injured on the Liberian-flagged Alnic, which sustained damage to a compartment at the starboard, or right, side at the front of the ship some 23 feet above its waterline. The ship had a partial load of fuel oil, according to the Greek owner of the tanker, Stealth Maritime Corp. S.A., but there were no reports of a spill.

The 550-mile-long strait runs between the Malay Peninsula and the Indonesian island of Sumatra, connecting the Pacific and Indian oceans, and is one of the world's busiest shipping lanes.

Capt. Rahul Khanna, head of marine risk consulting at Allianz, a global insurance company, said the waters outside Singapore are particularly dense and hard to navigate, with a constant stream of ships waiting offshore to pick up loads and crisscrossing the passage after refueling. In addition to being one of the busiest shipping areas in the world, he said, it's also one of the riskiest.

"It's a very dynamic environment. These are areas where lots of ships funnel through," said Khanna, who captained oil tankers for two years. "It requires the utmost level of situational awareness to pass through, and every sailor is aware of that."

Other maritime risk experts said that while traveling through the Singapore Strait carries a higher risk of collision, such incidents are becoming less frequent, making the 7th Fleet's mishaps all the more remarkable.

Several safety violations were recorded for the oil tanker at its last port inspection in July, one fire safety deficiency and two safety-of-navigation problems. The official database for ports in Asia doesn't go into details, and the problems apparently were not serious enough for the Liberian-flagged vessel to be detained by the port authority.

President Donald Trump, returning to the White House on Sunday night, responded to reporters' questions about the collision by saying, "That's too bad." Later Sunday night, Trump tweeted, "Thoughts & prayers are w/ our USNavy sailors aboard the #USSJohnSMcCain where search & rescue efforts are underway."

The collision Monday came just days after the Navy issued a report listing errors that led to the USS Fitzgerald collision.

The Navy said last week that it would discipline a dozen sailors who were aboard the Fitzgerald, including the top two officers and the top enlisted sailor. 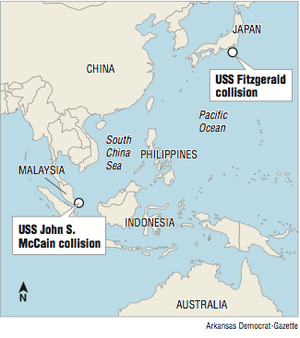 Photo by Arkansas Democrat-Gazette
Map showing the location of the USS John S. McCain collision and the USS Fitzgerald collision