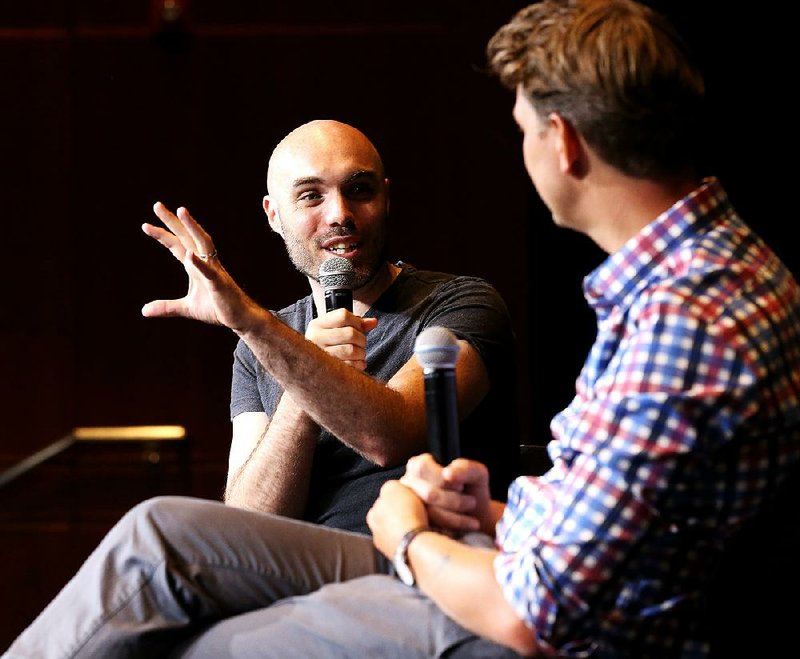 A new society with deep roots in Arkansas is bringing the magic of Hollywood to Little Rock, with a goal of demystifying moviemaking.

The Arkansas Cinema Society's premiere event, a three-day series of screenings and conversations with filmmakers, ran Thursday through Saturday at Ron Robinson Theater. The weekend featured actor Adam Driver, best known as Kylo Ren in Star Wars: The Force Awakens, along with filmmakers involved in Patti Cake$ and Pete's Dragon.

And after making movies all over the country, two Little Rock Central High School graduates were back in their hometown for the event.

The idea for a society to promote film screenings and education in Arkansas came when Jeff Nichols and Kathryn Tucker, who went to high school together, reconnected at a screening of Nichols' film Loving in 2016. Both wanted to promote the industry in their home state.

"It's hard to not keep Little Rock in mind or Arkansas in mind as a whole, and it's something that's just a big part of who I am, professionally, creatively and personally," said Nichols, whose 2012 film Mud starred Matthew McConaughey and was filmed entirely in Arkansas. "Growing up here, my only connection with the film industry was going to see movies."

Tucker, the Arkansas Cinema Society's executive director, said the premiere event represents what the group hopes to make happen on a larger scale at a planned film festival in August 2018.

"Really, I just want to show the community, show Arkansas, what we can do with so little," she said.

The festival the society envisions would fill the void the Little Rock Film Festival left when it shut down suddenly in 2015, after a nine-year run. Little Rock has several smaller film festivals focused on horror films, and gay and transgender issues, but the Arkansas Cinema Society has the goal of bringing back a broader event and more.

Tucker said she envisions a yearly festival, along with screenings throughout the year and workshops with filmmakers including Nichols.

Tucker said many of the films she and her husband, cinematographer Gabe Mayhan, have made in Arkansas were the result of connections made at the Little Rock Film Festival.

Tucker has worked as a second assistant director and crew member for films including This is 40 and Gangster Squad in Los Angeles, but returned home to Arkansas to produce a 2016 Southern-Gothic thriller, All the Birds Have Flown South, which stars North Little Rock native Joey Lauren Adams.

Tucker said she thinks Arkansas has the potential to build up its film industry and make more multimillion-dollar movies, which would create high-paying jobs for hundreds of people at a time and draw visitors to the state.

Though Arkansas doesn't yet have a film industry the scale of Los Angeles or Atlanta, Tucker said there are lots of people in Little Rock to support a growing cinema scene. On the opening night of this weekend's event, she said she could feel that energy.

"So much positivity and electricity, and the vibe's just been tremendous," she said. "It's really from the community."

Driver, whose father and several other family members live in Little Rock, appeared onstage in conversation with Nichols after screenings of Paterson and The Force Awakens. Both screenings sold out, drawing more than 300 people into the theater for each.

Nichols said he was excited that people would see Driver in the quieter, more nuanced Paterson, a 2016 film about a truck-driving poet that didn't make it to Arkansas during its theatrical run and might not be something casual moviegoers would seek out.

That evening, Driver opened the question-and-answer session after The Force Awakens up to the audience and answered children's questions about the villain he plays.

On Saturday, the afternoon screening of Pete's Dragon, Disney's 2016 retelling of the 1977 musical film, drew about 150 attendees of all ages, from children to grandparents to members of the Little Rock Central High School Film Club.

During the credits of Pete's Dragon, the stage lights turned on, and Nichols sat down with Lowery to discuss the filmmaking process. Nichols jokingly asked how Lowery cast the furry, CGI dragon, and had Lowery explain how the filmmakers shot with and created sounds for the electronically animated beast.

Lowery said he made drawings to show how he wanted the dragon's jowly, expressive face to look, and used photos of dogs, cats and elephants for reference. He said waiting for dragon eggs to hatch in time for production takes careful timing, but a swatch of green felt wrapped around a log makes a good stand-in for most shots.

Nichols said he hoped conversations such as these would shed light on what making movies is like for possible future filmmakers, which is something he hopes to continue with the society's future screenings and workshops.

"I distinctly remember the personal process for me of coming around to the idea that I could make movies, that that wasn't a silly idea, that that was something that people actually did for a career, and that it wasn't just a foolish notion," he said. "A big part of that for me was getting to see the process, hear from people that were making films themselves, and just see behind the curtain a little bit."

Print Headline: A bit of Hollywood alights in LR