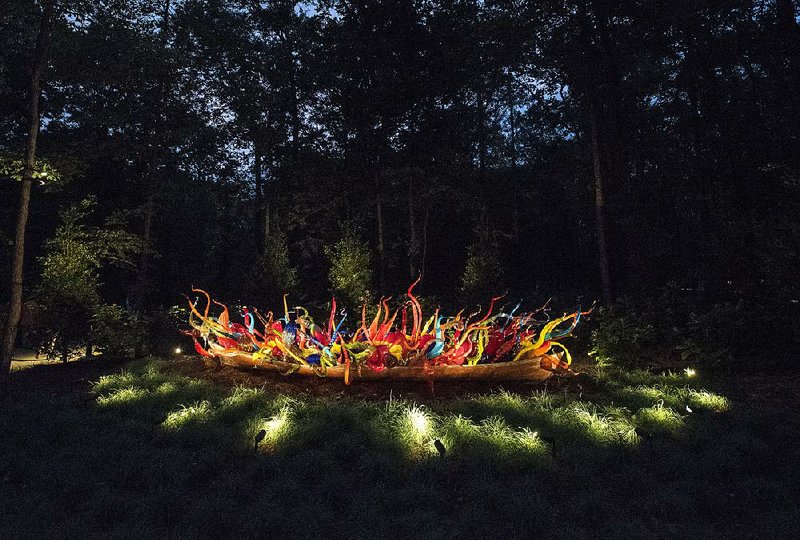 Fiori Boat, a wooden rowboat fi lled with 179 pieces of colorful glass, will be “a fantastic addition” to the Crystal Bridges museum, curator Lauren Haynes said.

BENTONVILLE — Crystal Bridges Museum of American Art will add Dale Chihuly’s colorful Fiori Boat to its permanent collection, acquiring the work after it emerged as the winner of a public vote.

The piece is currently on display at the museum as part of its “Chihuly: In the Forest” exhibition and was one of four works by the glass sculptor being considered for acquisition by Crystal Bridges.

Instead of making the final decision on which piece to purchase, Crystal Bridges set up a contest to let visitors vote on which one of the four pieces would remain in the museum’s permanent possession.

The 1,300-piece Sole d’Oro, the two-tiered Azure Icicle Chandelier and the Niijima Floats drifting in Crystal Pond were the other three works under consideration along with Fiori Boat. Those installations will remain on display at the museum through the rest of the outdoor Chihuly exhibition’s run, which ends Nov. 13.

“The boat is a fantastic addition to our collection as a classic representation of Chihuly’s well-known installations,” Crystal Bridges curator Lauren Haynes said in a statement provided by the museum. “The bold colors and forms stretch the boundaries of glass and connect to its natural surroundings. The Fiori Boat will stay in the forest through the exhibition, and then will be moved to a different location in the North Forest where it will join other artworks from the museum’s permanent collection.”

Fiori Boat is a wooden rowboat filled with 179 pieces of colorful glass forms. The composition was on display at the Atlanta Botanical Garden before being installed at Crystal Bridges.

Chihuly developed the idea for rowboats as installations during the “Chihuly Over Venice” project in Finland in 1995. He often floated pieces of glass downstream in a river and people would retrieve them in rowboats. It inspired the artist to use the boats in his work, and the piece Crystal Bridges is acquiring consists of blown glass from his Fiori — or flowers — series.

Crystal Bridges said it created the contest to let the public decide because of the success of the indoor-outdoor Chihuly exhibition, which attracted more than 106,000 visitors during an 11-week run before the indoor portion closed Aug. 14. The exhibition also was a catalyst for the museum’s single-month attendance record of 87,000, which was set in July.

The dual exhibition featured 300 objects spanning Chihuly’s 50-year career and was part of a collaboration with the sculptor and his team in Seattle. Many of the pieces on display at Crystal Bridges — like Sole d’Oro and the Azure Icicle Chandelier — were created specifically for the exhibition.

“Although this isn’t the way works of art are traditionally acquired, the curatorial team feels that each is uniquely engaging and would fit well within the museum’s permanent collection,” Haynes said in a statement announcing the contest earlier this month.

The purchase price for Fiori Boat was not revealed, but Executive Director Rod Bigelow said earlier this month that the museum had worked out those details with the Chihuly Studio before the contest began.

It will become the second Chihuly piece in the museum’s permanent collection. Crystal Bridges also owns a neon glass piece from early in the artist’s career called Neon Sculpture, which was on view during an exhibition a few years ago called “See the Light.” 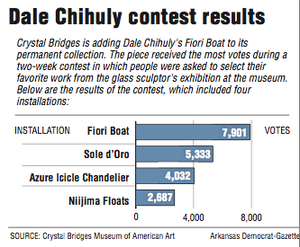 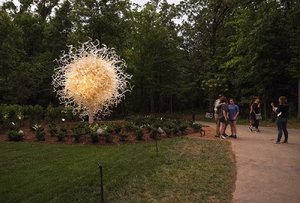 Photo by Spencer Tirey
Dale Chihuly’s Sole d’Oro was runner-up in voting on which of Chihuly’s artwork to add to the Crystal Bridges museum’s permanent collection.

“We are happy to see the excitement of Chihuly: In the Forest continue with the response from this unusual acquisition process,” Bigelow said in a statement provided by the museum. “Based on the voting results, the Fiori Boat will stay as a long-lasting reminder of the Chihuly exhibition. We’re thrilled that so many of our visitors voiced their opinion.”