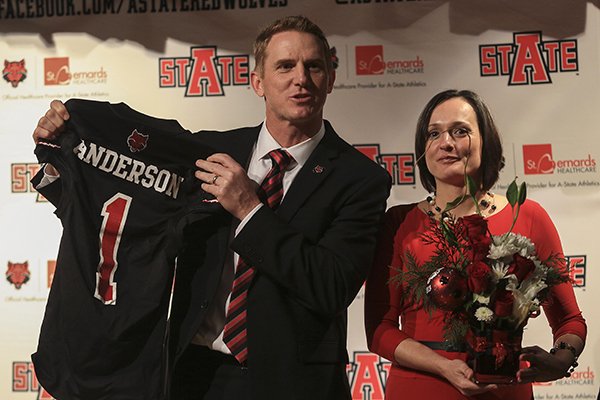 FILE — Arkansas State football coach Blake Anderson along with wife Wendy displays an ASU football jersey at a press conference in Jonesboro in this 2013 file photo.

Arkansas State head football coach Blake Anderson did not attend the first of the team’s weekly news conferences Monday because he and his wife, Wendy, are visiting a doctor near Memphis regarding her breast cancer, ASU assistant head coach Trooper Taylor said.

Anderson, 48, said in an interview with the Arkansas Democrat-Gazette in July that his wife was diagnosed in April with triple-negative breast cancer, which is a subtype of breast cancer that does not have the three “receptors” that the most successful treatments target, according to the Triple Negative Breast Cancer Foundation.

Taylor, who played football with Anderson at Baylor from 1988-1989, spoke in place of Anderson at Monday morning’s news conference and the Sun Belt Conference’s weekly coaches teleconference.