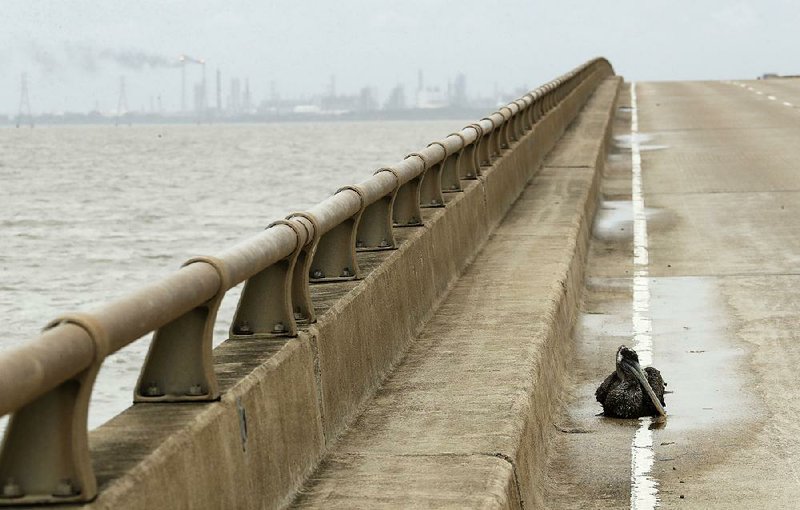 A pelican injured during Hurricane Harvey sits on a bridge Saturday in Port Lavaca, Texas, with an oil refinery in the background. The storm has led to shutdowns equal to 15 percent of the nation’s refi ning capacity.

The full extent of damage to the nation's oil and gas industry from Tropical Storm Harvey will not be clear for days, companies and experts said Monday, but the shutdowns equal about 15 percent of the nation's refining capacity.

The U.S. could see a 30 percent drop in refining capacity if the storm moves up the Texas coast toward Louisiana where additional shutdowns could occur.

Harvey, the strongest storm to hit the U.S. since 2004, has forced a drop of about 2.26 million barrels a day of crude refining capacity in Texas. Several pipelines have also been closed, potentially stranding crude in Texas and interrupting gasoline supplies to other parts of the country.

The national average price for gasoline at the pump moved only slightly on Monday, according to auto club AAA, but prices in some metro areas rose quickly over the weekend.

Ports along a 250-mile stretch of Texas coast were shut to tankers. Fourteen vessels laden with a combined 7 million barrels of crude from as far afield as Brazil and Colombia were waiting off the coastline Monday.

Craig Pirrong, professor of finance and director of the Global Energy Management Institute at Bauer College of Business at the University of Houston, said in an email that it was "too early to tell [regarding] oil and gas. Gulf operations shut down, and they won't be able to assess until they go back. Refineries should be OK as long as they have power."

He said that "with most people and companies hunkered down, it's hard to get a comprehensive picture."

Petrochemical refineries were also closing, which will likely dent the economy over the next week. Chevron planned to shut down its Cedar Bayou facility through Sept. 6 because of the storm, according to PetroChem Wire.

"You're knocking out a significant portion of production with one event," said Kathy Hall, executive editor of PetroChem Wire. "A lot of these plants are very complex."

The Houston metropolitan area, the nation's fifth largest, accounted for 2.9 percent of the nation's gross domestic product as of 2015, and that figure is probably higher today, economists said. A good amount of that comes from trade: Texas accounts for about half of petroleum and gas exports, along with about a fifth of chemical exports.

Gasoline for September delivery climbed 4.57 cents to settle at $1.7123 a gallon on the New York Mercantile Exchange after touching $1.7799 a gallon, the highest intraday price for a front-month contract since July 2015.

West Texas Intermediate crude for October delivery slipped $1.30 to settle at $46.57 a barrel, the lowest level in five weeks. Brent crude for October settlement dropped 52 cents to end the session at $51.89 a barrel on the London-based Intercontinental Exchange Futures Europe.

The storm drifted back into the Gulf of Mexico on Monday and was poised to regain strength before crashing into the Texas-Louisiana border, according to the National Hurricane Center.

"Clearly, the storm is having much more of an impact on the refined product side than it is on the production side for oil and gas," Tamar Essner, an energy analyst at Nasdaq Inc. in New York, said by telephone. There is uncertainty about what type of potential flood damage could have occurred at these refineries or how long they will be offline, she said.

Much of state keeping watch as rain looms