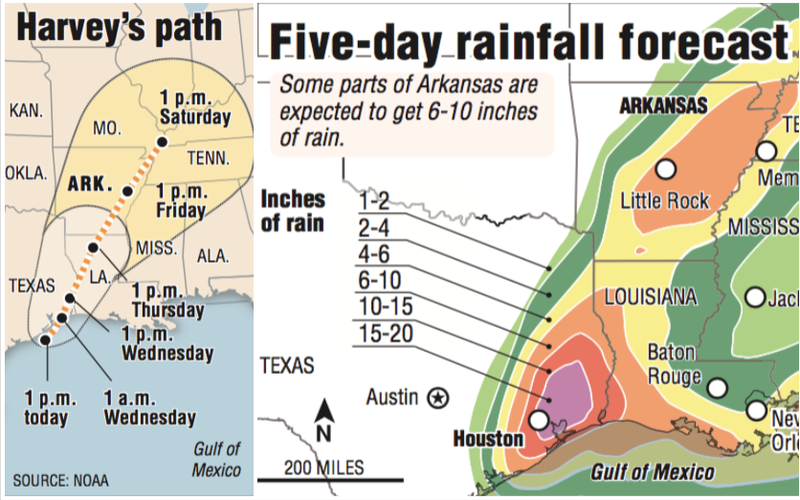 After dumping record rainfall on southern Texas and slowly wobbling along the Gulf Coast shore, Tropical Storm Harvey is expected to turn inland and bear down on Arkansas this week, forecasters say.

The remnants of the storm, which made landfall near Port O'Connor, Texas, as a Category 4 hurricane with winds of 130 mph on Friday, could dump up to 10 inches of rain on some parts of Arkansas, said meteorologist Sean Clarke of the National Weather Service in North Little Rock.

Little Rock is expected to receive 4 to 6 inches of rain from Wednesday through Sunday, and areas farther southeast could be soaked with 7 to 10 inches of rainfall. Northeast Arkansas is also predicted to receive 3 to 4 inches. Only Northwest Arkansas will be spared much rainfall, where less than 1 inch is forecast for the five-day period.

"It's going to be wet across most of the state," Clarke said. "There will be significant rainfall."

The storm, which was downgraded in strength to a tropical depression, will enter southern Arkansas late Wednesday evening and then work its way toward the northeast corner of the state. The state should see rain each day through Sunday.

Early forecasts indicate there is a chance for high winds and heavy rain Thursday in Little Rock, when the University of Arkansas, Fayetteville kicks off its football season with a 7 p.m. game against Florida A&M at War Memorial Stadium.

The Weather Service also said there is a threat of tornadoes with the duration of Harvey's remnants in the state.

The storm's path has been harder to predict than other hurricanes, Clarke said.

In 2005, Hurricane Rita battered the Texas coast before following a path forecasters say is similar to Harvey's projected trek. Up to 6 inches of rain fell as Rita's remnants chugged into Arkansas, 60,000 homes were left without power, and a tornado formed in White County.

"This is a different storm than Rita," said Dennis Felgen, a spokesman for the National Hurricane Center in Miami. "The Gulf is warmer than in 2005, and there are two weather systems that have created an equilibrium. That's why this one is harder to forecast."

Two ridges of high pressure flanked Hurricane Harvey, causing it to virtually stall along the Texas coast where it's producing record rainfall. According to the National Weather Service, Harvey has produced 9 trillion gallons of water and at least 44 Texas counties have reported receiving up to 20 inches of rain since Friday.

At least three people have died in the storm, The Associated Press reported.

Earlier, forecast models projected the storm system to move somewhere in a wide range between eastern Oklahoma and Mississippi.

However, the dispersion of a tropical storm in the Atlantic Ocean near North Carolina has created an atmospheric "vacuum" causing the remnants of Harvey to head farther north and east than first thought, Felgen said.

By 3 p.m. Monday, National Weather Service meteorologists were able to pinpoint a more definitive path of the storm.

"It was an atmospheric tug-of-war," Felgen said. "Once the depression [in the Atlantic] moves, it'll cause Harvey to move faster."

He said most Chicot County farmers have cut their corn, so weather is not a factor for that crop.

"If you're still cutting corn now, you're in trouble," he said.

In Lafayette County, emergency officials are preparing for the chances of flash flooding. The Weather Service said most of the state could see rapidly rising creeks and streams because of the onslaught of rainfall once Harvey's remnants arrive.

"The forecasts are always changing," he said. "The slightest bump in it could cause the system to push to the east one or two counties from us. We're preparing for the worst."

Clarke said that because of the potential for heavy rains during a short period of time, forecasters are warning residents of the possibility of flash flooding.

"Flooding is going to be a real problem across Arkansas," he said.