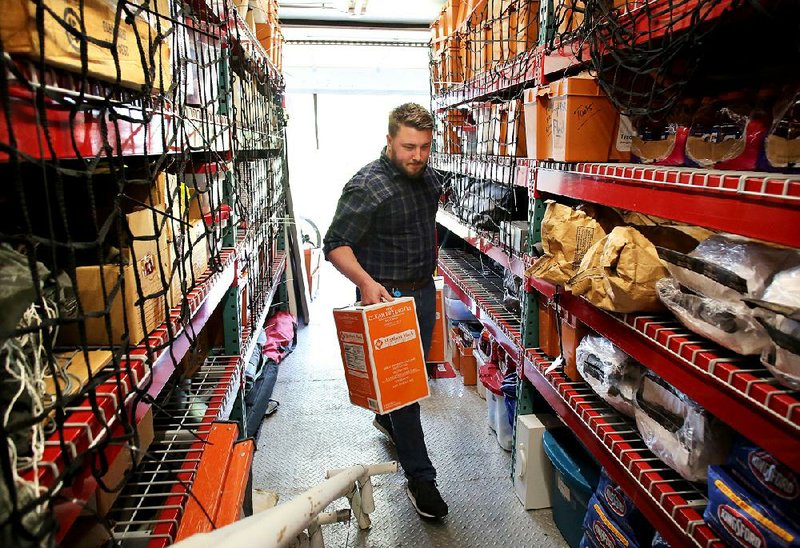 Arkansans have been helping the victims of Hurricane Harvey after floodwaters turned Houston streets into raging rivers on Sunday.

Wal-Mart Stores Inc. sent 1,023 truckloads of emergency merchandise to Texas, said Ragan Dickens, a spokesman for the Bentonville-based retailer. A total of 927 of them were carrying only water, he said.

"We've had our emergency operations center set up at the home office in Bentonville for the last three or four days," Dickens said Monday. "We're coordinating with the stores in the Texas region."

Wal-Mart has 512 stores in Texas -- more than in any other state.

Based on the store locator at walmart.com, there are 86 Wal-Mart stores within 50 miles of Houston.

The trucks were sent from several distribution centers. Some trucks left last week, before the storm hit. Others were en route over the weekend and some left Monday, Dickens said.

"The main thing we're focusing on right now is just getting the right product to the right store," he said.

Dickens said he didn't know how many trucks were taking donations to the victims, compared with the number that were hauling merchandise to restock empty store shelves.

Dickens said flooded streets have made it impossible for employees or shoppers to get to some stores, which are temporarily closed as a result. Other stores were open, but with many roads flooded, getting there was a challenge for the truck drivers, he said.

Dickens said some trucks were delivering products to stores in other Texas cities where they're likely to have an influx of people who have fled the flooded Gulf Coast region and are in need of basic necessities. Other trucks will be within a short distance of the flood zones so merchandise can be delivered to stores as soon as the water recedes and roads are passable.

The company and the Wal-Mart Foundation are giving at least $1 million in money and product donations to organizations helping respond to the severe weather in Texas and Louisiana, Dickens said.

Wal-Mart was praised for its quick response to help New Orleans after Hurricane Katrina in 2005. Wal-Mart provided $17 million in cash assistance during and after Katrina and $3 million worth of merchandise and in-kind donations to shelters and command centers in Louisiana, Mississippi and Texas, according to the company.

He said the 14-member team will assist with soil, water and air sampling to make sure there are no chemicals that would be toxic to humans. But the team likely will have to wait a day or two for floodwaters to recede before they can begin their mission, he said.

Texas Gov. Greg Abbott announced on Monday that he had activated the entire Texas National Guard in response to Hurricane Harvey, bringing the total number of deployed guardsmen to about 12,000. They will assist with search and rescue, then remain for the extensive recovery effort, according to a news release.

The Louisiana National Guard has activated about 210 soldiers and airmen in response to the hurricane, with another 230 full-time guardsmen supporting the effort, according to a news release.

The Louisiana guardsmen had distributed more than 1,150 ready-to-eat meals, 750 bottles of water and 247,000 sandbags as of late Monday.

At the request of the Federal Emergency Management Agency, the Sebastian County sheriff's office in Fort Smith sent its boat team and several members of its search-and-rescue team to Houston on Monday, according to a news release.

Melody Daniel, a spokesman for the Arkansas Department of Emergency Management, said the agency is ready to assist its neighbors in Texas but hadn't been asked to do so as of late Monday afternoon.

"Texas has done a really good job responding with what the flood victims needed," she said. "But they will need additional resources."

Tyson Foods Inc. of Springdale plans to send its Meals That Matter disaster relief semi-trailer to Houston on Wednesday, said Derek Burleson, a spokesman for the company. The 53-foot-long trailer has room for 20,000 pounds of food in addition to grills, tents, warmers, plates, utensils and condiments.

If all goes according to plan, Tyson employees from Clarksville, Dardanelle and Texarkana will be in Houston on Thursday to do the cooking, Burleson said. They'll provide free meals for victims, volunteers and first responders.

"We will be there as long as there's a need," Burleson said.

The number includes 18 linemen, engineers and other personnel from SWEPCO's Fayetteville, Rogers and Greenwood operations centers in Arkansas.

AEP Texas, based in Corpus Christi, serves about 1 million electric consumers in south and west Texas. It had 220,000 customers without power on Saturday, Main said. The number without power was 147,000 late Monday afternoon, he said.

Entergy will send 90 of its Arkansas employees to Texas today, said Kerri Case, a spokesman for the company's Arkansas operations. She said that will include linemen, servicemen, safety specialists, distribution operations, crew leads and logistics support.

The Salvation Army of Northwest Arkansas' three local officers deployed Monday to serve those affected by Hurricane Harvey. All three officers will be deployed for a minimum of two weeks to provide logistical, physical, and spiritual care on the front lines, according to a news release.

Hurricane Harvey made landfall on Friday night. According to the National Weather Service, a flash flood warning remains in effect through Wednesday for much of southeast Texas.

Much of state keeping watch as rain looms

"Catastrophic and epic flooding continued this afternoon in and around the Houston and Galveston areas and surrounding communities," the National Weather Service said on Monday. "Rainfall since Saturday has totaled 15 to over 30 inches. Additional life-threatening rainfall of 10 to 20 inches with isolated higher amounts are possible. If these amounts materialize, the results could be devastating, especially if any of these rains fall where catastrophic flooding has already occurred."