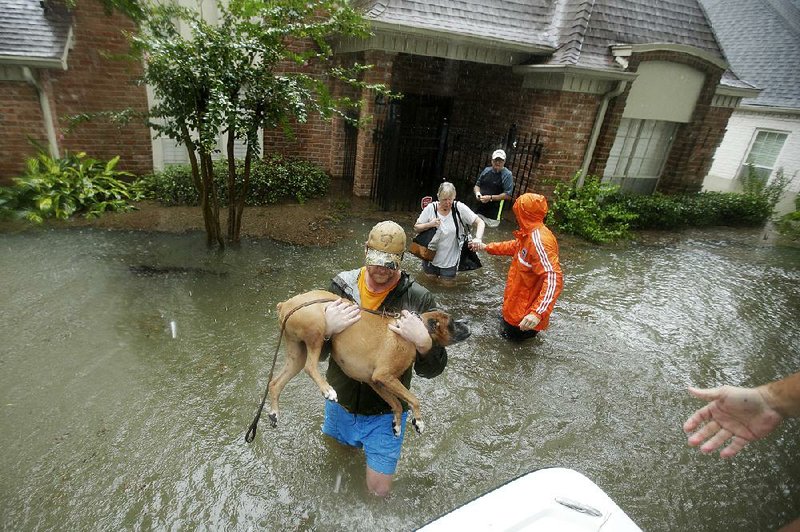 Volunteers help a family get out of their home Monday in a Houston neighborhood inundated by floodwaters. Federal Emergency Management Agency officials said Monday that the response to Harvey is “quickly drawing down” its disaster fund of more than $3 billion.

WASHINGTON -- President Donald Trump on Monday promised federal assistance to storm-ravaged parts of Texas, insisting Congress will act swiftly on a multibillion-dollar Hurricane Harvey recovery package as the government signaled current funds will be exhausted in the next few weeks.

The president said existing disaster balances of more than $3 billion are sufficient for the immediate emergency but promised his administration will send lawmakers a request for far more to help Texas rebuild from the record storm in which catastrophic flooding has hit Houston, the nation's fourth-largest city.

"The real number, which will be many billions of dollars, will go through Congress," Trump said at a White House news conference.

House Speaker Paul Ryan, R-Wis., promised through a spokesman that "we will help those affected by this terrible disaster."

The Republican-led Congress appears likely to add an immediate infusion of aid to a temporary spending bill to prevent a government shutdown Oct. 1, though congressional aides say the larger recovery package may take more time to develop. It's way too early to guess how much will be required with floodwaters rising in Houston, people stranded in homes and the city essentially paralyzed.

As the scale of damage from the storm became apparent, U.S. Rep. Sheila Jackson Lee, D-Texas, said she will draft a "robust" relief measure to be added to a spending bill on the House floor next week.

"We will need to put together an emergency supplemental appropriations bill," Republican John Culberson, a senior member of the House spending panel who represents Houston, said in a Bloomberg Television interview. "No one could have ever predicted or expected a catastrophe of this magnitude to descend on the Houston area."

Vice President Mike Pence told a Houston radio station Monday that given the "magnitude of the flooding" in the area that "it will be years coming back." He said 22,000 people had already applied for federal aid but that as "many as a half a million people in Texas will be eligible for and applying for financial disaster assistance."

"We remain very confident that with the reserves and with the support in the Congress, we'll have the resources that we need," Pence told KHOU radio.

FEMA announced Monday that it is prioritizing the Harvey response and holding off on less-urgent payments for earlier disasters to husband its money to make sure there is enough for immediate Harvey-related needs such as debris removal and temporary shelter for tens of thousands of Texans displaced from their homes.

Congress stepped forward with enormous aid packages after Hurricane Katrina in 2005 and Superstorm Sandy in 2012, though some GOP conservatives -- including Pence, then a House member from Indiana-- chafed at the price tag.

Already, a top House conservative was suggesting he wants to cut spending to pay for a response to Harvey. "It's a little early to say, but I have no doubt in the size of the federal budget we have we can find lower priority spending to help the people of the Gulf Coast who have been adversely impacted by this tragedy," said Jeb Hensarling, a Texas Republican and chairman of the Financial Services Committee.

Some hard feelings linger on the part of New York and New Jersey Republicans, who had to battle to win help for their Democratic-leaning states after the 2012 election.

"Despite my TX colleagues refusal to support aid in #SouthJersey time of need, I will support emergency disaster $$ for those impacted," Rep. Frank LoBiondo, R-N.J., wrote on Twitter on Monday.

Despite pledges of swift assistance, federal recovery aid can come slowly, as Louisianans know too well after last year's unprecedented flooding around Baton Rouge. A year after the Aug. 11, 2016 flooding, only about 1 percent of $1.7 billion in federal aid has been distributed. Gov. John Bel Edwards estimates that the state will need about $2 billion additional federal dollars, said Shauna Sanford, Edwards' communications director.

The state still awaits information from nearly 50,000 homeowners who qualify for the federal assistance, according to the state's flood relief task force.

In many cases, flood victims have given up hope of receiving government assistance, expressing frustration at the amount of red tape.

The federal aid, which must still be approved by Congress, follows the initial surge of FEMA relief immediately following the storm. That money -- which is distributed without legislative approval -- helped flood victims book hotel rooms and buy bare essentials.

FEMA also administers the National Flood Insurance Program, and Louisiana has sought numerous extensions to the 60-day window for property owners to file claims. Many property owners have struggled to file and amend their claims in a timely manner because of a lack of construction contractors relative to the mass demand after the floods.

FEMA processed more than 29,500 claims and paid $2.4 billion to insured property owners with an average payment of more than $88,000, according to the administration's August figures. About 100 claims remained incomplete. 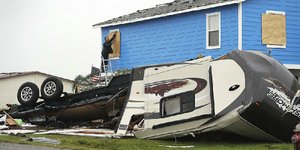 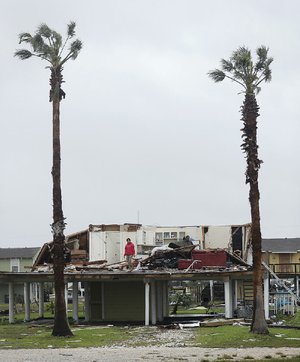 Photo by AP/ERIC GAY
Mike Vasquez (right) and Evelyn Perkins look over the remnants of their home Monday in Rockport, Texas. 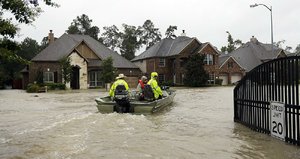 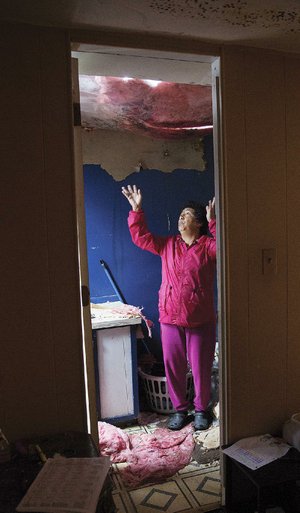 Information for this article was contributed by Andrew Taylor of The Associated Press; by Erik Wasson, Jennifer Epstein, Elizabeth Dexheimer, Anna Edgerton, Justin Sink and Jack Kingston of Bloomberg News; and by Hunter Field of the Arkansas Democrat-Gazette.