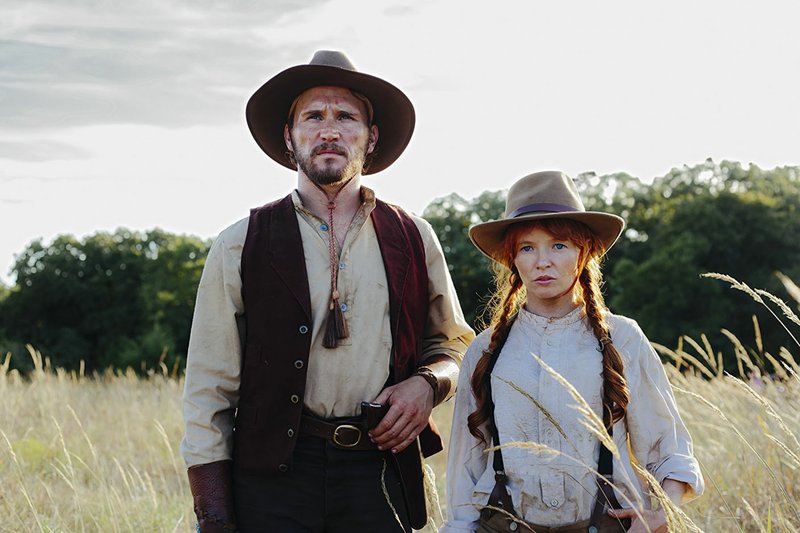 David Thomas Jenkins plays Vince Wagner and Stef Dawson is heroine Julie Richards in “Painted Woman,” a film by James Cotten, based on a novel by Dusty Richards. A Bentonville Film Festival selection, it debuts on the big screen this weekend.

In a classic Western, Julie Richards might have been a minor character -- a "kept" woman with an abusive past and a heart of gold.

But in "Painted Woman," a film directed by James Cotten, she's the heroine, and "it's very timely because of everything that is going on in the world right now. I didn't expect that to happen."

Cotten, who grew up in Fort Smith and Sallisaw, Okla., was hired to direct the film by a group of producers with Fayetteville ties, he says.

"They had optioned a Dusty Richards novel," says Cotten, "and then they kind of turned the story on its head to tell a Western from a woman's point of view. I'm very proud of that."

Based on "The Mustanger and the Lady," published in 2016 by the venerated Springdale author, a two-time winner of the prestigious Spur Award and a member of the Arkansas Writers Hall of Fame, the movie won Best Film at the 2017 Wild Bunch Film Festival, along with eight other awards and 12 nominations in other competitions. It was also a spotlight selection at this year's Bentonville Film Festival and will be released on DVD in February. In the meantime, Cotten has pushed, pulled and prodded for a theatrical release, at least in his home region of Arkansas and Oklahoma, where the film was shot.

"We had to prove ourselves, so we went to Poteau, and for a week we outgrossed" the major releases being shown in that Oklahoma theater, he says. "That opened some eyes, because at the end of the day, we're a Western with no big names in it. But it's showing everywhere I have friends and family, and I hope they all come out and support it and see a pretty cool Western."

Cotten was working for a regional television station in 1995 when "The Tuskegee Airmen" came to film around Fort Smith. He wanted to report on auditions for the movie, he remembers, but wasn't allowed to shoot anyone auditioning. He ended up shooting his own audition, was cast in the made-for-TV production and found his calling, he remembers.

"I love that story because I had no idea I wanted to be in the movie business," he says. "Then I worked on a movie for 30 days, and I fell in love with it."

Cotten says he "eventually decided acting is a business out of your control, and I liked to have control. Then I figured out it wasn't the acting I loved; I loved the story telling. So got a loan and went to London to film school for a year. My mom got sick -- she still lives in Sallisaw and my dad's in Van Buren -- and I came back and took care of her for a year, then got into film school in Los Angeles film school. A guy named Roger Corman spoke at graduation, and he was going to make a movie using alumni from the school. He picked me to direct the film. So my first film was for [cult filmmaker] Roger Corman, three months after I graduated."

"Demon Slayer" didn't make Cotten famous, but "one thing begets another." He returned to Northwest Arkansas to shoot "Sugar Creek" and "Resurrection County," then was hired for "La Linea" with Ray Liotta and Andy Garcia. Since then, he's spent much of his time producing for beginning filmmakers.

"Because I could give back that way," he says.