Seat in U.S. Senate in play if Arkansas' Cotton goes to CIA 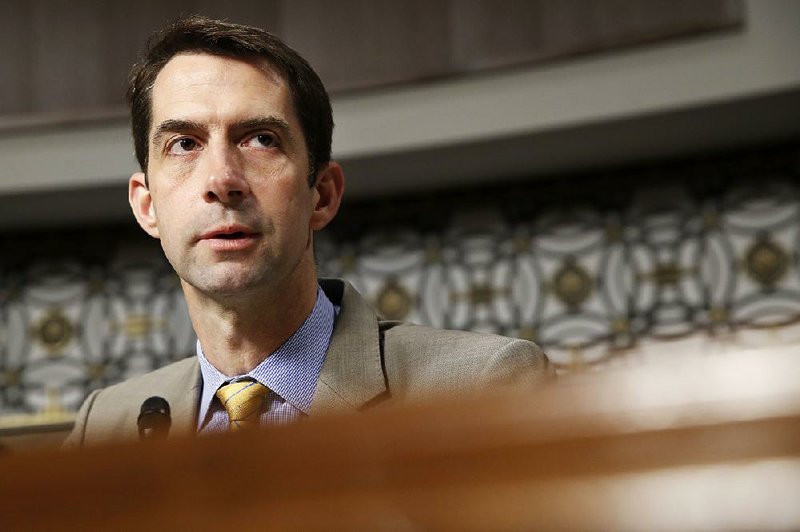 Sen. Tom Cotton, R-Ark., attends a hearing of the Senate Armed Services Committee on the nomination of Richard Spencer to be the Secretary of the Navy, on Capitol Hill, Tuesday, July 11, 2017.

WASHINGTON -- President Donald Trump is weighing whether to make U.S. Sen. Tom Cotton the next director of the Central Intelligence Agency, The New York Times and The Washington Post reported Thursday.

Both stories relied on statements from unnamed administration officials.

In Arkansas, potential candidates are already looking at Cotton's Senate seat, just in case he steps aside.

In Washington, the tentative plan calls for Secretary of State Rex Tillerson to be ousted and replaced by CIA Director Mike Pompeo, with Cotton filling Pompeo's vacancy, the newspapers reported.

In an interview, Cotton spokesman Caroline Rabbitt Tabler didn't address the substance of the reports.

"Sen. Cotton is focused on serving Arkansans in the Senate," she said.

Asked whether Cotton has discussed the CIA job with White House officials, Rabbitt Tabler declined to expound on her previous statement, saying, "I'm not going to have anything else beyond that."

Talk of a possible administration shake-up and a Cotton move to the CIA has circulated for more than a month. Cotton is a first-term Republican senator from Dardanelle. He was elected to the Senate in 2014.

In an interview in October, Cotton laughed when asked about a possible move to the CIA.

"I'm very happy to be in the Senate serving the people of Arkansas. I think the CIA has a director right now who's doing a pretty good job," he said.

Pressed about whether the reports were credible, Cotton said, "I don't pay much attention to the Washington parlor game debates. I focus on what I'm doing here in the U.S. Senate for the people of Arkansas, and Mike Pompeo's a great friend and he's a great director."

Cotton, who serves on the Senate Intelligence Committee and the Armed Services Committee, has been considered for administration posts before.

In November 2016, days after Trump's election, the Iraq and Afghanistan war veteran was summoned to Trump Tower in New York City to meet with the then president-elect. At the time, the New York Republican Trump was interviewing candidates for various administration posts, including secretary of defense.

The Arkansan has been a frequent visitor to the White House, conferring with the president about national security, foreign policy and immigration laws.

The state's senior U.S. senator, Republican John Boozman of Rogers, said in October that the CIA would be in capable hands with Cotton at the helm.

"I think he would be really very well qualified to lead the agency -- or any agency -- in government," he said.

In order to serve, Cotton would need to be nominated by Trump and confirmed by the Senate, where Republicans hold 52 of 100 seats.

Arkansas Gov. Asa Hutchinson, a Republican, would appoint a replacement to serve until the voters chose Cotton's successor in the next general election.

Under the U.S. Constitution, Hutchinson could select any Arkansas inhabitant 30 years of age or older who has been a U.S. citizen for at least nine years.

Under the Arkansas Constitution, the governor could appoint anyone except himself, Lt. Gov. Tim Griffin or their relatives.

The appointee would serve until after "the next General Election, if the vacancy occurs four months or more prior thereto," according to the state constitution. The 2018 election would decide who would complete the remaining two years of Cotton's term.

The Arkansas Constitution does not allow an appointee to run for the seat he is temporarily occupying, but he retains the post until Jan. 1 after the election.

In Little Rock, officials aren't convinced that a vacancy is imminent.

"We haven't had any of those discussions. It's all pretty premature at this point," said Hutchinson spokesman J.R. Davis.

If Cotton steps down, there'll be plenty of competition for the seat next year, Democratic Party of Arkansas spokesman Graham Senor said.

"There's a long line of people who have expressed interest in running against Sen. Cotton in 2020, so we expect that a U.S. Senate election in 2018 would see many Democrats throw their hats in the ring," he said in an email.

The party isn't releasing "specific names at this time," he added.

Griffin, who served two terms in Congress, said he's focused on his work as the state's lieutenant governor.

But he isn't ruling out a 2018 Senate run, saying he "would give it serious consideration, prayerful consideration if it opened up."

U.S. Rep. Steve Womack, a Republican from Rogers, is another potential candidate if Cotton departs.

"I am running for reelection and look forward to the upcoming campaign," she said in a written statement.

If Cotton is selected to lead the CIA, he'll be at the helm of the nation's most famous spy organization, helping to gather key national security information from around the world.

The agency, launched in 1947, helped America win the Cold War. Three of its leaders went on to serve as U.S. Secretary of Defense: James Schlesinger, Robert Gates and Leon Panetta.

"Only one CIA director has ever become president -- George H.W. Bush. And he credits his year at the agency (1976-1977) with teaching him the limits of intelligence," Meacham said in an email.

"What makes a good CIA director? As ironic as it sounds, unflinching candor. The agency is supposed to provide intelligence, not make policy," Meacham wrote. "Directors who are ideological as opposed to being focused on obtaining the best possible information have gotten into trouble in the past."

Cotton, who has campaigned for Republicans in Iowa and elsewhere, is frequently mentioned as a potential presidential candidate.

Asked if the CIA post would be a good stepping stone to the White House, Meacham said it's hard to know.

"Whether a stint at the agency is good or bad for a possible president entirely depends, I think, on how well that director does the job," he said.

Tillerson seen as on way out; Pompeo in wings

Print Headline: Seat in Senate in play if Cotton goes to CIA