Even though Arkansas had the second-highest opioid prescription rate in the nation last year, cities and counties in the state are late to the game in suing manufacturers and distributors of the highly addictive drugs as dozens of other communities have.

A litigation team representing the Association of Arkansas Counties and the Arkansas Municipal League hopes to soon change that. It said its approach is so unique it's never been done before.

Opioids are a class of drug that includes the illegal drug heroin, synthetic versions such as fentanyl, as well as prescription pain relievers like hydrocodone, oxycodone and morphine.

There have been roughly 100 lawsuits filed against top-tier opioid companies by cities, counties or states across the U.S. so far. The suits are expected to soon be grouped together as multidistrict litigation in federal courts.

Lawyers in Arkansas thought that if any individual town in the state were to file a lawsuit, it would get lost among all the other lawsuits from big cities like Chicago, Seattle and Cincinnati.

So, they came up with a different tactic. They plan to file group litigation that will include as many Arkansas cities and counties as will agree to sign on as plaintiffs, in a bid to make the lawsuit stand out from the rest.

"This is brilliant -- positioning Arkansas in a unique way by getting cities and counties to work together, instead of 15 different law firms split off with competitive claims. The fact that each are working together truly positions us uniquely on the national level," said Ernie Cory, an attorney with expertise in multidistrict litigation.

Cory, of the Cory Watson law firm in Birmingham, Ala., was retained by the Arkansas attorney team, led by Mike Rainwater with Little Rock-based Rainwater Holt and Sexton.

Jerome Tapley, another attorney at Cory Watson, said the approach the team is taking is unprecedented and "impressive."

Mark Hayes, head counsel for the Arkansas Municipal League, which represents more than 400 of the 503 cities and towns in the state, said joining local governments together is the only way to get recognized in the flood of lawsuits being filed against pharmaceutical companies.

"Here's the dilemma that all cities and any county would face: We are just not big enough alone," he said. "Collectively to have a lawyer be able to literally sit at the table, the steering committee that makes all this happen at the multidistrict litigation level, for our lawyer to be able to say, 'I represent virtually all of the counties, cities and towns, virtually the entire set of local governments in the entire state of Arkansas on this action,' that is unique. It makes you stand out in front of the rest of the group."

Cory said it was important for each individual city or county to file claims rather than having the attorney general file suit for the state, because the damage caused by opioid abuse has taken a toll on local governments, more so than at the state level.

Police departments and sheriff's offices have had to train their personnel to deal with overdose patients rather than wait for emergency medical teams to arrive. Many law enforcement officers in the state now carry Naloxone -- a medication often distributed under the brand name Narcan -- which is used to block the effects of opioids during an overdose.

North Little Rock's Police Department outfits all of its officers with the medication. The drug and the training to use it cost the city money, Mayor Joe Smith said.

"It's not going to do anything but get worse," Smith, who serves as president-elect of the Arkansas Municipal League, said of the opioid problem in Arkansas. "I feel we need to get on top of this epidemic as quickly as you possibly can.

"Being a part of this lawsuit with the Municipal League and the Association of Arkansas Counties makes a tremendous amount of sense. ... The amount of money [being spent to address opioid abuse] in the state of Arkansas is very large, and it's not going to do anything but get bigger, and we've got to stop it," Smith said.

North Little Rock is one of 20 cities that have agreed to become plaintiffs in the group litigation the attorneys plan to file in the coming weeks. Others include Springdale, Rogers and Batesville. Hayes said he thinks more cities will sign on quickly.

The Association of Arkansas Counties is just starting to recruit counties to join the lawsuit, but it has been working on the strategy for months.

"We are at a crisis level," Hayes said. "Our society has suffered dramatically. I think we have a unique chance in this litigation to make something really good happen.

"I do not think normally that litigation is a great solution to things. It's sort of the last resort," he said. "But in this regard, I think it's probably the only alternative that local governments have. I'm looking forward to getting the right equity and justice for local governments."

Counties, jails and court systems are overwhelmed with problems resulting from drug abuse.

Rainwater said his team's strategy of joining together as many plaintiffs as possible shows how Arkansas resolves problems and will help position the lawsuit as a leader in the joint suits against "Big Pharma."

"The City of Springdale decided to join this lawsuit because we understand the devastating toll that opioid addiction takes on communities and families," a statement from the Springdale mayor's office said. "No community is immune from the ravages of addiction, and we want to do our part to hold these responsible accountable for their role in this national crisis."

Little Rock also is considering joining. Mayor Mark Stodola sent an informational memorandum to the city's Board of Directors that said, "there is the strong possibility of substantial financial recovery for the city."

He listed examples in California where pharmaceutical company Teva agreed to pay $1.6 million to settle claims filed by two counties.

The team of Arkansas-based lawyers is working on building claims for damages for each town and county in the state. The Cory Watson law firm brings to the case the expertise of handling multidistrict litigation. Cory has served as lead counsel in five such cases.

There were 235.9 million opioid pills sold in Arkansas in 2016, according to data from the federal Centers for Disease Control and Prevention and the National Institutes of Health. Data show that the state had the highest rate of teen prescription drug abuse in 2013, and 1,067 people have died from drug overdoses in the state since that year.

The CDC said 78 people die every day from opioid overdoses in America.

According to 2016 CDC data, Arkansas had the second-highest opioid prescription rate in the nation. Alabama and Tennessee were ranked No. 1 and No. 3, respectively, according to the data.

"For every man, woman or child in this state -- that's newborns all the way to age 100 and up -- the prescriptions that have been let out for opioids would put a bottle with 38 pills in every person's hands. It's disseminating an entire generation," Hayes said.

"The volume of damages being suffered by local governments is extreme," he said. "No police department eight or nine years ago had to worry about doing some sort of lifesaving technique for an overdose person, because the numbers were so low we could just do it through ambulance services. Now we have Narcan in the hands of cops."

Nationally, many experts and government officials are calling it the worst drug epidemic ever.

"The current opioid epidemic is one of the deadliest drug epidemics in American history, affecting every sex, race, class and age," Gov. Asa Hutchinson said at a recent news conference on the crisis.

The allegations in lawsuits that have already been filed against opioid manufacturers or distributors include fraudulent marketing and failing to report suspiciously large orders of prescription pain pills. The suits started in 2014. Some allege that the companies concealed or misrepresented the harmful, addictive properties of opioid medications.

Some of the bigger brands being sued are Purdue Pharma, Teva, McKesson, Johnson & Johnson and CVS, but the number of opioid manufacturers and distributors listed as defendants so far is upward of 70.

Several companies have released statements saying they aren't to blame for how pills are abused once they sell them, according to several national news articles.

With the group lawsuit, Rainwater said, "Our whole state is getting ready to focus on the opioid pandemic.

"Arkansas has taken the brunt of it," he said. "Arkansas, unfortunately, has a real serious opioid problem. It's going to take a lot of money and a lot of time to fix this nuisance." 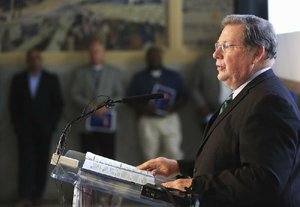