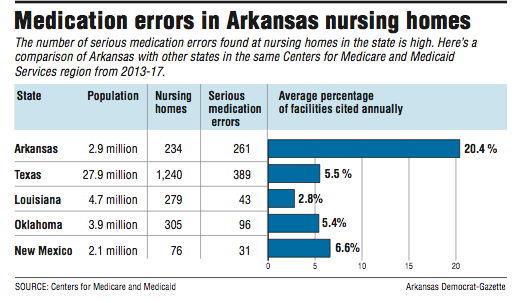 Hers wasn't a slow spiral into death's grasp. It was sudden.

The 65-year-old died after a nurse with a history of making mistakes gave her another resident's high-dose narcotics.

The mistaken medication administered to Cooper was one of 261 "significant" medication errors uncovered by watchdogs in Arkansas nursing homes since 2013, according to an Arkansas Democrat-Gazette analysis of federal nursing home data.

A significant medication error is one that discomforts or jeopardizes the health of a resident, according to the U.S. Centers for Medicare and Medicaid Services. Inspectors take three factors into account when determining whether a medication error rises to the level of "significant": the resident's condition, the frequency of the error and type of drug.

Federal data show significant errors on average are discovered in one of every five nursing homes in Arkansas, which has 234 such facilities. Neither state nor federal regulators could provide information on how many medication errors have resulted in deaths.

Fines were levied in 43 of the cases, totaling about $1.3 million, according to federal data.

Arkansas' significant error citation rates far surpass those in most other states, and the Natural State is the only state that has ranked in the top 3 for percent of errors in each of the past five years.

The percentage of Arkansas nursing homes cited in 2013 and 2014 was the highest in the country. Also, for those years, Arkansas was the only state where more than 20 percent of the nursing homes were cited.

That's counting only the errors that have been made public. Many errors go undiscovered by inspectors and are unreported, as Cooper's case illustrates. Her nurse had made multiple significant medication errors, which the facility didn't report before Cooper's death, according to reports.

Government data account for only errors found by regulators, who readily acknowledge that they can't catch every infraction. Furthermore, facilities are required to report medication errors only if the facility determines an error rises to the level of abuse, neglect or maltreatment.

Inspectors enter facilities annually unless a complaint is received, in which case inspectors investigate the complaint. They work to discover medication errors by reviewing selections of records and by watching nurses give medicine to residents.

"The fact that we do a sample -- we have no choice but to do a sample -- is going to ensure that there are deficiencies that we never see," said Frank Gobell, deputy director of the Arkansas Office of Long Term Care, which inspects Arkansas nursing homes.

Significant medication errors have been found in facilities ranging from some of the top-rated nursing homes in Arkansas to the state-run home for military veterans in Fayetteville.

Martha Deaver, president of Arkansas Advocates for Nursing Home Residents, said that for many years she's seen nursing home residents suffer because of medication errors in Arkansas nursing homes. The current rates, she said, are concerning.

"The outcome of these serious violations of our laws not only causes harm, but in many cases the nursing home resident does not survive," Deaver said. "Nursing home residents are our most frail and vulnerable citizens. They are at the mercy of their nurses to make sure they receive their medications properly."

While resident advocates are alarmed over Arkansas' medication administration issues, representatives of the nursing home industry see it differently. Rachel Bunch, executive director of the Arkansas Health Care Association, said the errors represent only a small fraction of the "hundreds of thousands" of medications administered each year in Arkansas.

"Any individual citation requires the proper response, but we don't believe the rate is a widespread concern in Arkansas," Bunch said.

Arkansas' significant medication error citation rate has been nearly triple the national average over the past decade, according to data from the U.S. Department of Health and Human Services, but officials and industry insiders don't know why.

Bunch and Carol Shockley, director of the state Office of Long Term Care, cautioned against comparing error citation rates among states, because each state has different inspectors who may interpret things differently.

"You're dealing with humans," Shockley said.

Bunch also noted that federal guidelines state that the "relative significance of medication errors is a matter of professional judgment."

"Based on this, you can see where the potential for differing measurements of medication errors versus significant errors exists," Bunch said.

Compared with other states in Arkansas' U.S. Centers for Medicare and Medicaid Services region (Texas, Louisiana, Oklahoma and New Mexico), nursing homes in Arkansas have been flagged for significant medication errors at four times the rate of the other states.

While each error is an individual event, most experts trace them to a common issue -- staffing. Nursing homes typically have high employee turnover, and staffing levels are usually kept near a minimum to maximize profits, plaintiffs' attorneys and resident advocates say.

"Medication errors happen for a variety of reasons, but in my opinion, they almost always lead back to staffing," said Bob Edwards, a Little Rock attorney who specializes in nursing home abuse and neglect cases. "It takes a lot of teamwork to provide proper care between nurses and aides, but when owners don't put enough team members on the floor, it makes it hard to provide adequate care."

In Cooper's case, Gassville Therapy and Living had shortages in certified nursing assistants for every day in January leading up to the fatal error on Jan. 11, according to staffing reports submitted to the state Office of Long Term Care. The shortfalls, though, didn't rise to the level of violating federal regulations because enough licensed nurses were on duty to keep the total staff-to-resident ratio in compliance, records show.

What do medication errors look like? Sometimes a nurse simply gives the medication on the wrong side of a meal. In Cooper's case, the error was the result of two years of failures by the facility to properly train one of its nurses, according to a survey report from the state Office of Long Term Care.

Before licensed practical nurse Cynthia Sakian gave Cooper morphine and Percocet that were prescribed for another patient, she had made at least five previously documented medication errors in the less than two years of being issued her Arkansas nursing license, the report said.

Those errors included administering a harmful dose of nerve pain and seizure medication after misreading the patient's records, giving the wrong insulin after grabbing the wrong pen, and giving an incorrect narcotic after again misreading a resident's records.

Sakian was also one of several nurses who in 2016 documented that they had been giving a resident medicine for Alzheimer's disease, when in fact the facility didn't have any of that medication in stock.

Each time Sakian was "counseled" by a supervisor, but the facility allowed her to continue administering medication and didn't put plans in place to monitor her in the future, according to a survey report by the state Office of Long Term Care.

She was fired after the fatal error involving Cooper, according to the report. The Arkansas State Board of Nursing reviewed the case and issued her a letter of reprimand, requiring her to complete a pair of courses on giving medication.

Her nursing license was revoked for about six months, but she was cleared to continue practicing in September.

Attempts to reach Sakian weren't successful, and her attorney didn't respond to a message requesting comment.

Cooper's family sued Gassville Therapy and Living, Reliance Health Care, Eagle Health Systems and LTC-Systems/RX. All four companies share a corporate address in Conway, and the latter three comprise a web of businesses that own and manage the facility. All three companies are primarily owned by brothers Bryan and Brandon Adams.

The case was settled out of court under undisclosed terms, and an attorney for the family declined to comment, citing a confidentiality agreement.

The Cooper family's lawsuit is the type that would be hampered by the passage of a constitutional amendment on tort reform that's set to go before Arkansas voters on next year's November ballot. The measure would cap punitive and noneconomic damages, as well as limit attorney's contingency fees to one-third of the net amount awarded their client.

Tort reform has long been championed by the nursing home industry, and its staunchest opposition has come from plaintiffs' attorneys.

A similar measure was to appear on the 2016 ballot until the Arkansas Supreme Court ruled that the ballot title contained unclear terms.

In support of that measure, Reliance Health Care in 2016 gave $173,140 to Health Care Access for Arkansans, a ballot question committee formed to advocate for the tort reform amendment's passage.

The Arkansas Health Care Association, which receives monthly dues from nursing homes in the state, contributed $585,677 to the tort reform effort.

Eric Bell, Reliance Health Care's general counsel, said that even one medication error is too many, but he noted that facilities that contract with Reliance have administered about 80 million doses of medication to residents since 2013.

"Potential residents should take comfort in such a low error rate," he said. "The odds of a significant medication error is literally less than one in a million."

Asked why a nurse would be allowed to continue giving medication despite having a history of making medication errors, Bell said that confidentiality laws precluded him from commenting on specific patients or personnel matters.

As for the Arkansas Health Care Association, Bunch, the executive director, said medication errors have been on its radar. Within the past year, Bunch said the group has worked to develop an educational program with clinical best practices using input from pharmacists, medical directors, nurses and state regulators.

The data show signs of improvement, even though Arkansas' significant error citation rate remains well above that of other states. After peaking with errors at about 27 percent of nursing homes in 2014, the rate dropped below 20 percent in the next two years, and its on pace to drop below 15 percent this year.

For Cooper's family, her death was a cruel irony. The mother of two was a nurse before several health complications stole her mobility.

Months after her sister Linda's death, Elaine Sondy sat in the corner booth at a north Arkansas McDonald's inside a Wal-Mart. Beside her husband, she discussed the sister she so dearly misses -- the razor-sharp wit, the keen political observations, the sisterly gossip.

"Linda was made of some pretty stern stuff," said Elaine's husband, David. Elaine nodded slowly with a small smile, her eyes fixated on the table.

"[Elaine] was at the nursing home so much, they could've had her on the payroll," David joked, drawing a slightly larger smile from his wife.

In the months after Cooper's death, Elaine gradually learned the chain of events that killed her sister. She's gracious and angry all at once.

"I know it was human error, but people were turning their head to a grave thing," Elaine said. "This was preventable."