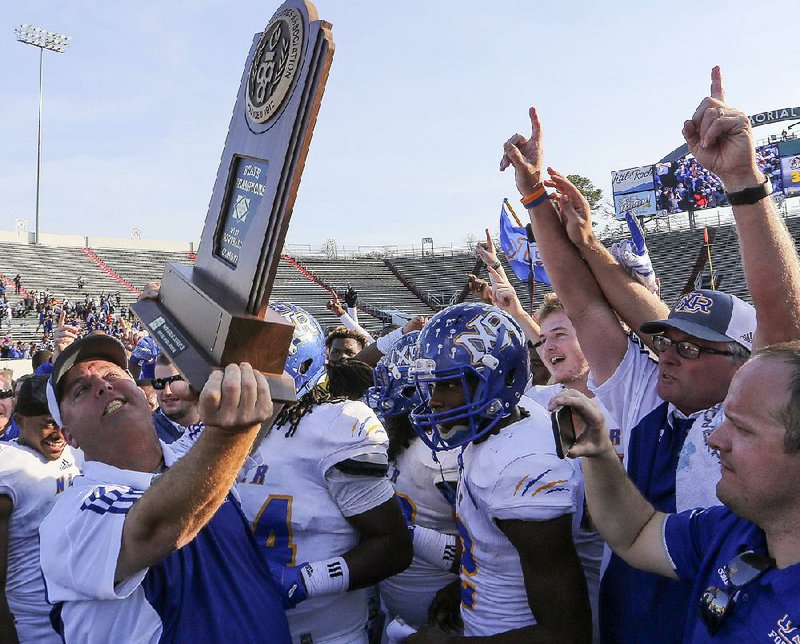 "One, two, three: How 'bout them 'Cats?" North Little Rock Coach Jamie Mitchell yelled to his team after a 44-37 victory over the Bentonville Tigers in the Class 7A state championship game.

Relief came in three ways for the Charging Wildcats:

• It was the school's first state championship since 1972 and fifth overall.

• One year after losing the Class 7A state championship game against Fayetteville, North Little Rock returned to the title game and won it.

North Little Rock (13-0), the 7A-Central Conference champion and No. 1 team in the Arkansas Democrat-Gazette's overall top ten, overcame a 14-0 first-quarter deficit and held off Bentonville's last-minute attempt to tie the game.

"That's just how we're built," said Mitchell, who was hired in 2015 from Starkville (Miss.) High School to replace Brad Bolding. "We're built for tough times and hard stuff. We've got some hard-nosed kids and tough kids who know how to battle and fight. We thought it was over, then you blink your eye and you have to fight until the last second."

Winning for central Arkansas was a big deal for Mitchell and the Charging Wildcats.

"You want to get this thing not only for us, but for our community, our school and our conference," Mitchell said. "So many of those guys are super excited for us. We finally got that monkey off of our back."

Sophomore running back Brandon Thomas led North Little Rock with 199 yards and 2 touchdowns (24 and 8 yards) on 23 carries. Junior running back Oscar Adaway finished with 91 yards and 1 touchdown on 15 carries.

Senior quarterback David Chapple was 7-of-15 passing for 91 yards with 1 touchdown and 2 interceptions.

Hughes found Johnson for an 18-yard reception to move the ball to the Charging Wildcats' 10-yard line with two seconds remaining. He spiked the ball to attempt to give the Tigers another down, but officials ruled time had expired and North Little Rock's players ran onto the field to celebrate.

Bentonville Coach Jody Grant expressed his displeasure with the final play of the game.

"You would like to see that taken care of on the field and let the kids play it out," Grant said. "That ball was spiked with time left on the clock. I would have loved to have seen us have another shot at it."

"That really sealed the deal for us," Mitchell said. "Zavion got some huge pressure. He's the best defensive player we got. Sam Taylor was Johnny on the spot. To me, that was the play of the game."

Moore agreed with his coach.

"If we didn't make that play, we wouldn't have won," Moore said.

Lyons completed 16 of 30 passes for 248 yards with 1 touchdown and 2 interceptions before leaving the game with a head injury. Preston Crawford rushed for 150 yards and 2 touchdowns on 16 carries, while Mays-Hunt caught 9 passes for 95 yards. 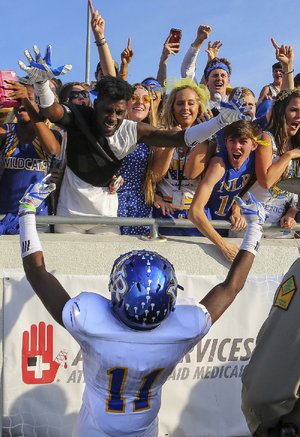 Photo by Benjamin Krain
North Little Rock defensive back Cairee Davis (11) celebrates with teammate Michael Williams and fans after the Charging Wildcats’ victory over Bentonville in the Class 7A championship game Saturday at War Memorial Stadium in Little Rock.
Gallery: 7A NLR vs Bentonville 12.02.2017

Print Headline: The wait is over