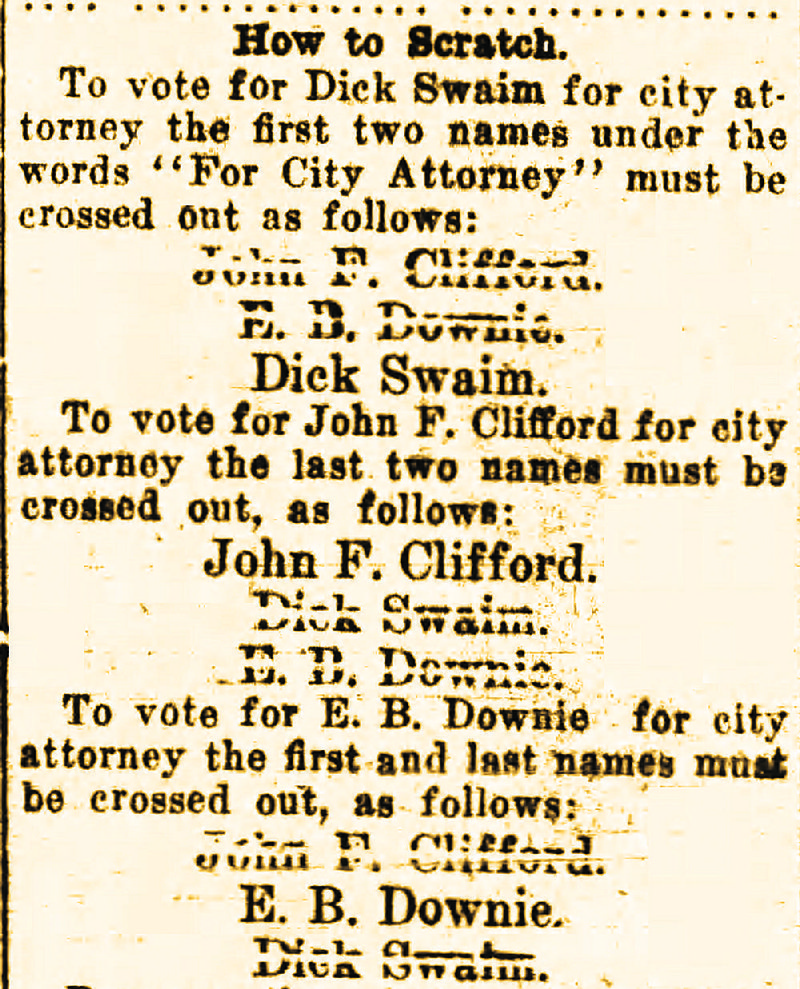 In this detail from a news story Dec. 6, 1917, the Arkansas Gazette advises Little Rock women how to mark their ballot.

Women voted for the first time in Pine Bluff, Little Rock and North Little Rock 100 years ago this week. Other than that, it was a ho-hum round of city primary elections -- according to reports in the Arkansas Gazette and Arkansas Democrat.

The women exercised a historic, but limited, right to vote they'd been granted just that March by the state Legislature. Under Act 186 of 1917, Arkansas women who would be age 21 or older on Election Day could vote in political primaries (only in primaries) -- if they pledged to support the nominee of their party and paid the $1 poll tax by deadline, the first Monday in July.

The Gazette reported that, before Little Rock's city primaries Dec. 7, 1917, more than 1,400 female citizens met the criteria -- 1,600, according to Mrs. Frank Gibb, chairman of the Pulaski County Equal Suffrage Committee.

None of them would get to be the first Arkansas woman to vote.

That privilege had already been enjoyed in Fort Smith, on Nov. 13, 1917. And not in a ho-hum ballot, either.

Fort Smith's special election was to replace a mayor removed from office. In October, a jury found John Heskitt Wright guilty of making a pre-election promise -- not to the people, all candidates do that. He was convicted of illegally pledging to have John H. Vaughn made city attorney if Vaughn's pals Barney Dunn and Jim Burke would use their influence to support him.

Wright also was convicted of nonfeasance for failing to use the police to suppress violence against female telephone operators during their strike at Southwestern Bell.

In Hidden History of Fort Smith, Arkansas (The History Press, 2012, $16.99 paperback, $8.99 Kindle) Ben Boulden recounts that the state's very first female voter was Dymple B. Johnson. He doesn't say whether she supported the victor, Arch Munro, but odds are she did not vote for Wright, even though, oddly enough, he was on the ballot to replace himself.

He lost by 192 votes. The Gazette reported that the majority of Fort Smith's 422 qualified female voters had not supported him. And he clearly knew it: He requested an injunction to stop the city clerk from certifying the results, on three grounds:

He did not get that injunction. Further, state Attorney General J.D. Arbuckle wrote an opinion that women could vote in all primaries, partisan or non.

This was still new news Dec. 6 as the Gazette set out to cover a vote it described as only of interest to the women. It gave the situation much more ink than did the Democrat, whose columns included just two references to new voters.

On Dec. 6, the Gazette told the first-timers to be sure to "cross out or scratch off the names of all persons except those for whom you wish to vote." A helpful example used the names of three candidates for city attorney.

Primary day in Little Rock was remarkable weatherwise. A snowstorm began about noon. Elsewhere in the state, 4 to 7 inches came down.

Conditions at Little Rock inspired Gazette cartoonist Hubert Park to add a line of shivering men to his cartoon "Ladies Day at the Polls." As sleet descends they're waiting on a woman who has been in the booth 30 minutes.

The first man in line is unable to tap ash off his cigar because his arms are full of packages. Behind him, a man says, "Lookit tha poor boob in front of us, Ed. She asked him to hold her bundles."

A large man behind Ed scolds, "Let her take her time. Don't you 'member tha first time you voted?"

"Br-r-r," says the guy quaking at the end of the line.

Below the cartoon came a jocular account headlined "You Can't Tell Little Rock Suffs How to Vote."

Snugly reposing in the galvanized, fireproof, burglar proof ballot boxes turned into City Central Committee last night were many dainty feminine votes. For the fair sex braved a snowstorm in order to murder some of their husbands' perfectly good votes, and the scented ballots are also blood-stained, so to speak.

Some of those optimistic family politicians who promised to deliver the family vote, bag and baggage, now are sadder but wiser men. Women are not contrary, as a rule, they learned, but sometimes they don't want to do what you want them to do. And those fellows who bartered their wives' votes in advance had to get out and wheedle some other man's wife into voting their way in order to make good.

The reporter, God rest his bones, told the story of Mr. and Mrs. C.B. Davidson. Davidson was secretary of the Democratic Party's city central committee. He "made the mistake of admitting" that the opponent of one of his candidates was an able man.

"Well then," said Mrs. Davidson, in a kind but firm tone of voice, "if he is just as well qualified as your man, I think I shall vote for him. His wife is a good friend of mine."

The reporter suggests that to prevent wives from voting the other way, the reader would find it necessary in the future to call his friends' opponents horse thieves: "Women don't like horse thieves and will not vote for them."

Davidson is then quoted as saying he feared that his wife had recruited his mother and sister to vote against his man.

Mrs. Davidson's mother is 71 years old, but she braved the inclement weather yesterday to cast her first vote.

I like imagining readers chortling about the pol who dug his own hole deeper by disclosing his mother's age to the daily paper.

You couldn't tell the fair voters a thing about how to vote. ...

The male voters usually spend a lot of time in the booths biting on the end of their pencils (furnished by a benevolent government), but not so the women voters. Given the ballot, they repair to the booth and then go through the following ritual:

A few minor details have been overlooked, no doubt, because part of the time is spent in making an inventory of the dress of the woman in the next booth out of the corner of the eye. ...

Altogether the election went off well. There was no disturbance among the feminine voters -- no hair pulling nor betting. Our allies did fairly well, all things considered, and now if they will just permit us to sit down and tell them who to vote for they will be very welcome indeed in the political family.

Boy, bring up some chairs for the ladies.

Remember: I could not make this stuff up. This was really the news in 1917. 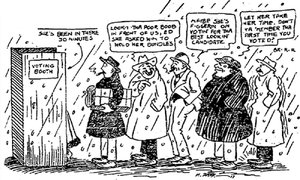 Men wait in the snow as a woman takes 30 minutes to cast her vote in this detail from “Ladies Day at the Polls,” by Arkansas Gazette cartoonist Hubert Park, published Dec. 8, 1917.