Cougars take a big bite out of Anderson's Hogs 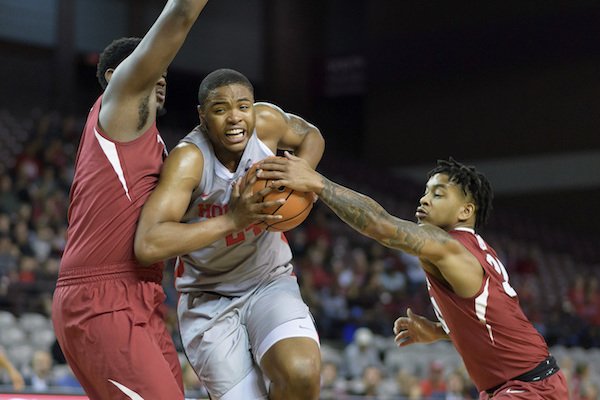 Arkansas' Anton Beard (31) attempts to grab the ball from Houston's Breaon Brady (24) during the first half of an NCAA college basketball game, Saturday, Dec. 2, 2017 in Houston. (Wilf Thorne/Houston Chronicle via AP)

HOUSTON -- There was a 61-point swing the wrong way for the Arkansas Razorbacks between a 102-67 victory over Connecticut at the Phil Invitational in Portland, Ore., on Nov. 26 and a 91-65 loss to Houston on Saturday night.

It's 2,270 miles from Portland to Houston and how the Razorbacks (5-2) played seemed about that far apart, too.

After the University of Arkansas, Fayetteville handed Connecticut its most-lopsided loss in 40 seasons -- since Syracuse beat the Huskies 101-61 on Nov. 30, 1977 -- the Razorbacks suffered their most-lopsided loss to the Cougars in the teams' 41 meetings.

"They put it on us," Arkansas senior guard Anton Beard said of the Cougars.

Those Cougars -- nicknamed Phi Slamma Jamma by Houston Post writer Thomas Bonk for being Texas' tallest fraternity -- were led by Naismith Basketball Hall of Fame inductees Hakeem Olajuwon and Clyde Drexler and reached the 1983 NCAA Tournament championship game where they were upset by North Carolina State 54-52.

This season's Cougars may not have any future hall of famers, but Houston dominated an Arkansas team which was brimming with confidence after a strong showing in Portland, where the Razorbacks opened with a 92-83 victory over Oklahoma and played defending national champion North Carolina tough before the Tar Heels pulled away late to win 87-68.

The Razorbacks never led in falling behind 11-0 and trailed the Cougars (6-1) by as many as 30 points.

"We're still got a lot of work to do," Arkansas Coach Mike Anderson said. "We're a work in progress."

Houston Coach Kelvin Sampson, who improved to 5-2 against Arkansas including a 4-1 record at Oklahoma, said the loss could prove beneficial for the Razorbacks.

"When you win a game like they did against a really quality team like Connecticut, this early in the year, maybe a game like this will get their attention," Sampson said. "Because they're really, really good.

"They've got a good team. I've got a lot of respect for Mike Anderson and Arkansas."

Anderson said the Razorbacks got lots of praise back home after the Connecticut game, but were humbled by the Cougars.

It was Arkansas' first true road game this season, though it was played at Texas Southern's H&PE Arena because Hofheinz Pavilion is undergoing a $60 million renovation this season.

"That's a hard lesson to learn sometimes when you go into an environment like this right here and teams really come after you," Anderson said. "They aren't just playing you guys.

"They're playing that Arkansas national championship -- that program -- and our guys have got to understand that and match that energy level the other team is playing with."

The Cougars routed the Razorbacks after struggling to beat New Orleans 75-66 on Wednesday night.

"The difference between a coach, media and fans is that I don't ever base the next game on the last one," Sampson said. 'Had we played Arkansas Wednesday night, we would've played like this. This wasn't a surprise."

The Cougars never let up and they got career-high scoring performances from senior forward Devin Davis (28 point) and junior guard Corey Davis (17 points) while shooting 51.8 percent (29 of 56) from the field, including 10 of 21 three-pointers.

"At no point in the game were we content," Corey Davis. "We were focused on not only scoring, but stopping them from scoring."

The Razorbacks shot 34.5 percent from the field (19 of 55) and had a season-low seven assists.

"That tells you we didn't have the ball movement and the people movement," Anderson said. "But give Houston credit. They got physical with us and we didn't come back at them."

Arkansas played four consecutive games away from home prior to SEC play for the first time in 11 years, but Beard said he didn't believe the Razorbacks were road weary.

"We've got to bring our defense anywhere we go, and this game we didn't do that," he said.

The Razorbacks return home to play Colorado State on Tuesday night at Walton Arena. The Rams (4-4) beat Colorado 72-63 at home on Saturday night.

"I think we'll bounce back pretty well," Beard said. "We've got to take this loss like men and come back and ready for practice."

Arkansas plays its next six games at home, including No. 12 Minnesota on Saturday night.

"We've going to be all right," Razorbacks senior guard Jaylen Barford said. "We've got a long season ahead of us."