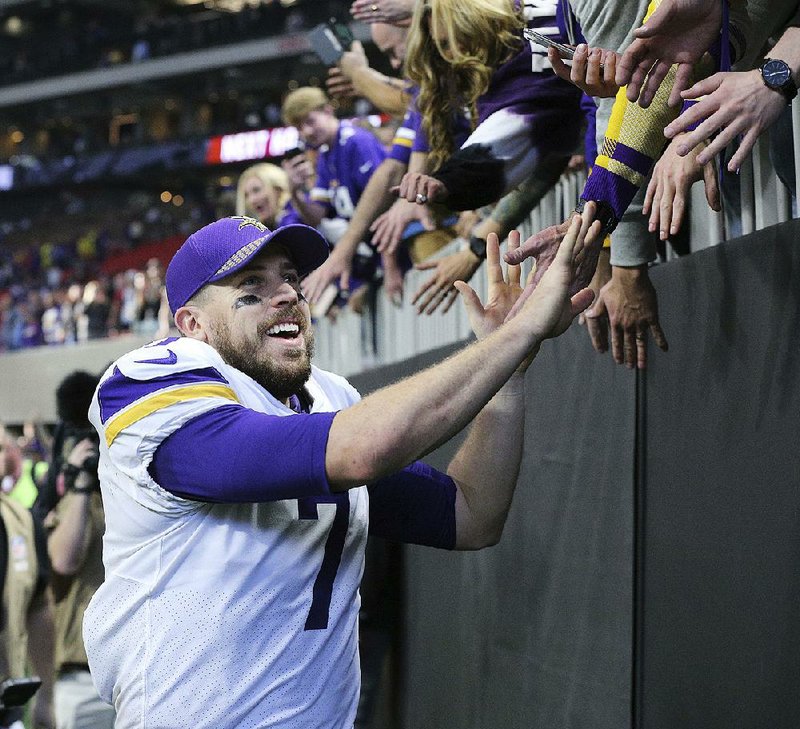 Minnesota quarterback Case Keenum celebrates with fans after the Vikings defeated the Atlanta Falcons 14-9 on Sunday in Atlanta. Keenum threw for 227 yards and two touchdowns in the victory.

ATLANTA -- The Minnesota Vikings frustrated Matt Ryan, blanketed Julio Jones and kept the Atlanta Falcons out of the end zone.

Minnesota's eighth consecutive victory was all about defense.

Case Keenum threw two touchdown passes, including the go-ahead score on the first play of the fourth quarter, but the guys on the other side of the line were largely responsible for the Vikings extending their winning streak to eight in a row Sunday with a grind-it-out, 14-9 victory over the Falcons.

"It was a hard one," Coach Mike Zimmer said. "We've got a good bunch of fighters on this football team, and I think maybe they really believe now."

Keenum strengthened his hold on the starting job by going 25 of 30 for 227 yards. He hooked up with Jerick McKinnon on a 2-yard scoring play in the second quarter and went to Kyle Rudolph for a 6-yard touchdown on the first play of the fourth quarter, capping an 89-yard drive that consumed more than eight minutes.

Minnesota (10-2) turned in a stellar defensive effort against a team that led the league in scoring a year ago and seemed to be finding its stride during a three-game winning streak, averaging nearly 32 points.

The Falcons (7-5) were held without a touchdown for the first time since Dec. 13, 2015, when they were blanked 38-0 by Carolina. Ryan's streak of 30 consecutive games with a TD pass also ended, going down as the eighth-longest in NFL history.

"They are a very good defense," Ryan said. "We knew it was going to be tough sledding at times, but we've got to be more productive."

Jones was held to a pair of catches for 24 yards, one week after he had 12 receptions for 253 yards in a victory over Tampa Bay.

"We know how great a player he is, how talented he is," Zimmer said. "It's important that we try to take away some of the opponent's strengths each week."

With the victory and Detroit's loss to Baltimore, the Vikings took a four-game lead in the NFC North and kept pace with Philadelphia in the race for the NFC's top seed.

The loss could be a crucial one for Atlanta, which came into the day trailing New Orleans and Carolina by a single game in the NFC South.

After Matt Bryant's third field goal gave the Falcons a 9-7 lead early in the third quarter, the Vikings took control with a bruising drive that included three third-down conversions. Once they flipped ends of the field at the end of the third quarter, Keenum found Rudolph all alone in the back of the end zone for the go-ahead score. The tight end beat cornerback Blidi Wreh-Wilson, who took over with Desmond Trufant held out because of a concussion.

While Rudolph and his teammates celebrated, Wreh-Wilson looked around as though he was expecting help.

Atlanta's last gasp ended when Bryant missed a 45-yard field goal with 4:58 remaining after the Falcons passed on a chance to go for it on fourth and 4.

Minnesota held the ball the rest of the game, essentially sealing the victory when Keenum connected with Adam Thielen on a third-down pass that went for 22 yards. The Vikings kneeled down deep in Falcons territory as the clock ran out.