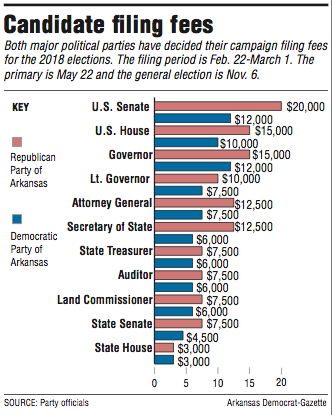 Fees that candidates pay to the state’s political parties to appear in primary elections are expected to remain much the same in 2018, according to officials for both the Democrats and Republicans.

The Republican Party of Arkansas, which met Saturday at its new party headquarters in Little Rock, did not take up the topic of filing fees, said party spokesman Stephen Houserman. There are no plans to change the party’s fees before the 2018 cycle, he said.

State Democrats, who met Saturday at Philander Smith College in Little Rock, approved one change to their filing fees. With a vote of the State Committee, the party lowered its fee to run for state representative from $3,500 to $3,000, in order to match what Republicans charge.

The vote also lowered the filing fee for lieutenant governor and attorney general from $8,000 to $7,500. However, the higher fee had been set last year, and during the last election for either office, in 2014, the fee was $7,500.

Democratic Party Chairman Michael John Gray called the change and the cost of filing fees “a reasonable look at where we are.”

Democrats hold 33 out of 135 seats in the Arkansas Legislature, and none of the statewide or congressional offices.

The 2018 elections in Arkansas will include races for governor and the rest of the constitutional officers, state House and some state Senate seats, as well as each of the state’s four seats in the U.S. House of Representatives.

The party filing period for next year’s elections begins Feb. 22 and ends March 1. The primary elections will be held May 22, followed by the general election on Nov. 6.

Instead of paying the filing fees, Democrats hoping to appear on the primary ballot may submit a petition with signatures equal to either 8 percent of votes cast for the office in the last primary or another number set by the state executive committee if there was no primary.

The Republican Party does not allow candidates to petition for ballot access, Houserman said.

Party filing fees for county, municipal and township offices are set by county committees, with approval from the state executive committee of the parties.

Three special elections have also been scheduled for early next year to fill vacancies in the Arkansas Legislature. Primary elections will be held on Feb. 13 in House District 83, and Senate Districts 29 and 16.

The special election in all three districts will be held May 22, the same day as the regular primary.

Houserman said the Republican Party filing fees are the same for a special election. The Democrats are planning to reduce their fees for the special elections to match the abbreviated terms the elections are for, a party official said.