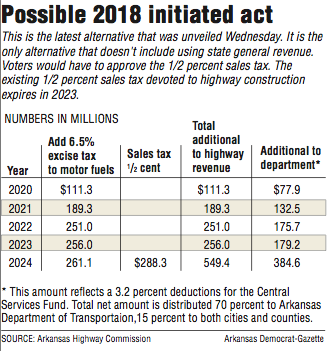 Adding a 6.5 percent excise tax on the wholesale price of fuel and extending a 0.5 percent state sales tax for another 10 years would help raise nearly $8.4 billion over that period for highway and bridge maintenance as well as some capital projects across the state, the top official at the Arkansas Department of Transportation said Wednesday.

At a meeting Wednesday of the state Highway Commission, Scott Bennett unveiled what he called his "first shot" at developing a new funding program for the Legislature or the voting public to consider next year.

The proposal was developed after Gov. Asa Hutchinson said he would "vigorously" oppose using any state general revenue for highways, which was a key component of previous proposals the commission had been considering. State highway officials are expected to refine the new proposal before the next commission meeting in February.

Alternative proposals that included using state general revenue along with a mix of other tax and fee increases remain "on the table," said Danny Straessle, the spokesman for the Transportation Department.

And any new revenue package must include ways to increase revenue from vehicles powered with alternative fuels, including electricity, Bennett said. Though alternative-fuel vehicles are a small fraction of vehicles on the roads today, as their numbers increase, revenue from conventional-fuel taxes will drop.

Bennett said increasing registration fees on alternative-fuel vehicles would be one way to make up for any decline in revenue from gasoline and diesel taxes.

He also sketched out how the money would be spent, which he said would be a crucial part of persuading lawmakers and voters to adopt the funding program.

State highway officials and other proponents of improving the state road system have been trying for several years to find a long-term source of highway funding, which has remained relatively flat compared with state general revenue.

If highway revenue had kept pace with rising state general revenue, more than $900 million annually would be available for highway maintenance and construction, Bennett said, "and we wouldn't be having this discussion."

They have been making do with temporary programs, such as the $1.8 billion Connecting Arkansas Program that targets regionally significant projects around the state. It is financed in part by the 0.5 percent sales tax that voters approved in 2012. It expires in 2023.

In 2011, voters approved allowing the Highway Commission to reissue up to $575 million in special bonds to finance a $1.2 billion program to repair parts of the interstate system in Arkansas. The bonds are being repaid with the state's share of federal money that goes to interstate maintenance.

In crafting the latest funding proposal, Bennett said he wanted to keep it simple.

It includes applying the 6.5 percent state sales tax to the wholesale price of gasoline and diesel for the first time. The tax would be phased in over three years -- 3 percent in the first year, 2 percent in the second year and 1.5 percent in the third year -- "to lessen the impact on the taxpayer," Bennett said.

It would raise a total of $256 million annually by 2023. Of that amount, $175 million would go to the Transportation Department. Under the state's traditional funding formula, 15 cents of every dollar generated for highway projects goes to cities, 15 cents goes to counties and 70 cents goes to the department.

Under the funding alternative, voters would be asked to renew the half percent sales tax in 2024.

Together, the excise tax on the wholesale price of fuel and the 0.5 percent sales tax would raise $549.4 million annually with $384.6 million going to the department every year.

Coupled with the $447 million the department now receives annually, nearly $8.4 billion would be available over the next 10 years.

What the department would do with the money is an important part of the conversation on raising more revenue for highways, Bennett said.

"I think it's time to stop talking about the revenue and start talking about projects -- what we're going to do with the revenue," he said. "We may need to consider using these next several months to educate the Legislature or the people not just about bring the money from here or there in a tax increase, but what can be done with this level of funding."

That money in the first 10 years would focus on the 50 percent of the highway system that carries 90 percent of the state's traffic. That would free up regular maintenance crews to devote more attention to the other half of the system, Bennett said.

Bennett said he had no precise estimate Wednesday on how many miles of highways would be improved with the additional funding, but he said that would be available by the February commission meeting.

"With this level of funding, you're not going to get all 16,000 miles in good condition," Bennett said. "You're going to get about half."

"This is great information, and I think it will help get better highways in Arkansas," said Dick Trammel of Rogers, the commission chairman.

But in response to another commission member, Robert S. Moore Jr. of Arkansas City, Bennett said the outline of how the money would be spent couldn't be as firm as the projects, for instance, that were outlined in the Connecting Arkansas Program. Too many variables remained in such a large spending plan, he said.

"We need to stay in generalities as much as we can," Bennett said. 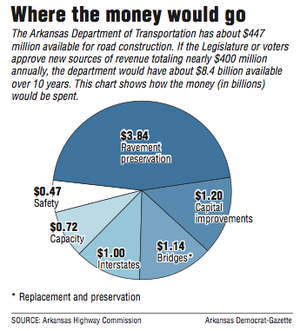 A chart showing where the highway money would go.