Neighbors happy team ahead of schedule so far 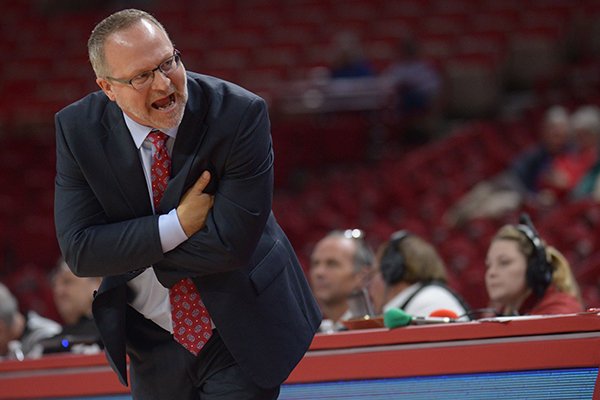 FAYETTEVILLE -- The Arkansas women's basketball team will enjoy the comforts of home for five of its next six games, beginning with tonight's game against UNC Charlotte at 7 in Walton Arena.

The Razorbacks (5-3) are coming off a 71-60 loss at Kansas on Sunday, their fifth game away from home already this season.

CHALK TALK Niyllah Jamison-Myers led UNC Charlotte with 18 points in just 19 in minutes in its victory over Coppin State … Laia Raventos added 11 assists for the 49ers in the victory. … Arkansas Coach Mike Neighbors does a pregame talk with fans at 6:35 p.m. on the east concourse of Walton Arena. …. The Razorbacks will be available for a postgame autograph session on the floor. … Arkansas ranks first in the SEC and eighth in the country with 81 turnovers in 8 games and second in the nation in fewest turnovers per game (10.1).

University of Arkansas, Fayetteville Coach Mike Neighbors said his team faced a new challenge as Malica Monk and Jailyn Mason both picked up two quick fouls against the Jayhawks. But he was pleased with the way his team responded.

"I did learn that we can adjust on the fly," Neighbors said. "I had to put Dev [Cosper] in there at the point. And there was no panic. I thought Mal and Jailyn stayed real composed with foul trouble and then Mal went out and had a second half that got us back in the game."

Monk finished with a team-high 21 points and played 32 of 40 minutes, despite the foul problems. Sophomore Kiara Williams also turned in a big effort with a career-high 16 rebounds. Both Monk and Cosper (17 points) have now scored in double figures in all eight games.

Neighbors said his team's ahead of schedule in his first season at Arkansas.

Monk and Cosper, who are averaging 19.1 points and 18 respectively, have gotten comfortable quickly with Neighbors' fast-paced system and the 6-1 Williams has blossomed in her second season, too, Neighbors said. She's leading the team with more than seven rebounds per game.

"That's not one of those things if we're sitting around at the beginning of the year, 'Hey, Mal and Dev are going to be averaging 18 apiece,'" Neighbors said with a laugh. "They are certainly capable. Kiara's job on the glass at her size and with her experience has been pleasant.

"I wouldn't have ever set out, based on the teams we've been playing that's a kid who's been rebounding like she is."

UNC Charlotte (3-5) snapped a three-game losing streak with a 78-49 victory over Coppin State on Sunday. The 49ers have spent most of their time on the road, too. Sunday's victory was just UNC Charlotte's third home game out of eight.

Print Headline: Neighbors happy team ahead of schedule so far