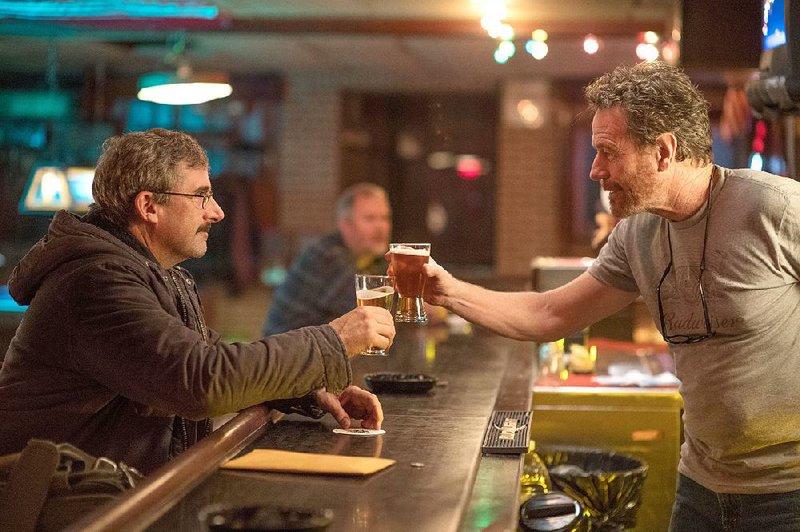 With full apologies to Robert Frost: Something there is that doesn't love a road movie.

To begin with, there's the issue of contrivance: One unlikely character has a mission of some kind he has to accomplish, for various not-entirely-credible reasons, he has need of a companion -- or maybe several -- almost all of whom surely do not want to join the protagonist on his perilous journey. But then, something happens to force the reluctant voyager's hand and, lo and behold, he is next seen sullenly sitting in the passenger seat as his now-boisterous companion drums his hands along to a snappy '60s number on the radio.

Rating: R, for language throughout, including some sexual references

There are always reasons to string together unlikely companions in such a manner. When done well (Midnight Run, let's say), they are just amusing enough for you to suspend this particular disbelief; when the unholy mishmash doesn't sit well, you become all too aware of how idiotically unlikely the entire premise is in the first place.

Yes, they are a stalwart of narrative literature -- what is Pilgrim's Progress but a medieval road tripper? -- but that doesn't give them a free pass when it comes down to it: They still have to earn their stripes, so to speak, and hang together in ways that are ultimately believable instead of endlessly falling in place in order to keep the plot thrumming along.

Which brings us to Richard Linklater's film, concerning a trio of former Vietnam Marines -- the quiet and heartbroken Doc (Steve Carell); the brash hedonist Sal (Bryan Cranston); and the reformed Reverend Mueller (Laurence Fishburne) -- brought together by the death of Doc's only child, serving the Corps over in Baghdad. As you can imagine, there is a significant history with the trio, all serving together before Doc took the fall for some outlandish and ultimately despicable shenanigans involving the stealing of morphine by the other two, forced to serve out the rest of his time in the Brig.

Intriguingly, in the ensuing years (the film is set in 2003), they have not been keeping in any kind of touch. The old comrades had their reasons for steering clear of one another, including Mueller's guilt at his less-than-holy past, and Sal's penchant for living only in the moment, and barely that much; but both of them realize just how badly messed up the unassuming Doc got, somewhat inadvertently, by their hand. So when Doc asks them to accompany him to pick up his son's remains from Dover Air Force Base, ultimately choosing to eschew a military funeral and take his son back to his native New Hampshire, they can hardly refuse.

Well, actually, the Rev can, and does refuse -- with some frequency -- as the obligatory fly in the ointment, spending most of the first hour of the film conspiring to return to his wife and his congregation, and ditching his former comrades, but once that is finally settled by a timely intervention involving the Office of Homeland Security, he's on board for good, and Linklater, working from a novel by Darryl Ponicsan (who also co-wrote the screenplay), is finally free to move his characters in the direction of his choice without further plot hindrance.

To be sure, despite its conventional wrapping, in its heart it remains a Linklater film: Obsessed with the passage of time -- the men, having been enjoined on their journey by a youngblood Marine, Washington (J. Quentin Johnson) -- reminisce endlessly about their days in 'Nam, and all the fun they supposedly had thumbing their nose at the notion that the war meant anything. And here, cannily casting Fishburne, whose first on-screen appearance was as a wild young gunner in Francis Ford Coppola's Apocalypse Now, some 40 years ago, Linklater is directly in his element, noting the ways in which characters undergo radical, systemic change (Mueller), or remain locked in place (Sal), depending on their needs.

It also plays as a kind of sequel to Hal Ashby's excellent The Last Detail (also based on a novel by Ponicsan), right down to the visit to Manhattan, which only adds to the curious heft it attempts to dead-lift. Thematically, it seems entirely unsure of itself: Is it an anti-military piece, as the characters continually badmouth the pinheads who sent them overseas to intervene in a war they had no particular stake in; or is it, somehow, an homage to the deep, abiding love soldiers have, not for rank or victory, but for one another? Linklater keeps the film bounding between the two poles, which might make for an unsatisfying experience, but is a good deal more realistic than a film playing it facile and straight. Both ideas can be true, of course, which seems to be a more accurate reflection of the strange complex of conundrums most soldiers suffer through, than an uber-patriotic totem.

The performances are also strong: Carell is playing a familiar type of role -- the sweet-tempered, long suffering loner -- but he finds Doc's considerable dignity and holds onto it like a sailor lashing himself to the main mast in a gale. Cranston, whose deservedly heralded performance in Breaking Bad finally gave him the jump-start to a film career varied and mercurial -- even when he chooses a role that he can't sink himself into, you still get the impression he relished the challenge -- gets a spotlight character to work with, the lovably hard-bitten alcoholic bar owner whose penchant for booze and high jinks is only matched by his attachment to truth, spoken at all costs and without reservation. He's believably grizzled and iconoclastic, ranging from self-serving to wildly generous without a moment's hesitation. Fishburne, whose character's initial stern countenance begins to revert back to that of his earlier, far looser days, maintains his belief system, even when under full-on assault by the acidic Sal.

But that alone can't quite save the film from some seriously self-inflicted wounds. Indeed, the ending, somewhat enigmatic and oddly abrupt, brings to bear a peculiar plot element that frankly could have more or less resolved practically everything else in the film had it only come a few days earlier, as it clearly should have. Confoundingly enough, it also leads to the most heartfelt and moving moment in the film, so you have to take its contrived plot machinations along with the swell of emotional potency at once. For all we know, that was exactly Linklater's plan, and we have no choice but to take him at his word.