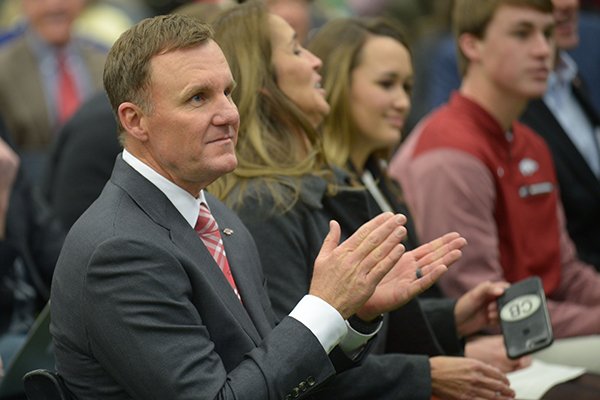 "I'm a high school football coach and I'm extremely, extremely proud to say that," Morris said. "If you've never been a part of a fraternity of high school coaches, you won't understand what I'm about to say.

"When I'm able to walk into a room at the high school coaches' office and sit down, I can relate immediately to what their day-to-day life is."

Morris, who had a 169-38 record in 16 seasons at five Texas high schools from 1994-2009 before breaking into the college ranks as Tulsa's offensive coordinator, said that as the Razorbacks' coach he wants to improve things for high school coaches -- especially in Arkansas.

"We're going to lock arms together with you to make sure we all benefit, and we're going to see this program rise to the top. You're always welcome here."

"Chad is one of us," Dawson said. "He's been there and he understands what we do. It's nice for us to see one of our high school guys make it to where he's at now.

"We're proud of him and we're proud for him and look forward to having a good relationship with him."

Jones said he got to know Morris several years ago through Auburn Coach Malzahn, who at the time was Springdale High School's head coach.

"I'm fired up to have Chad here," Jones said. "Of course, as high school coaches, we root for our own. So I'm rooting for all the high school guys that have made the jump to college. Guys like Chad and Gus."

Morris said he and his assistant coaches will recruit Texas extensively as well as other bordering states, but that the entire staff will recruit Arkansas.

"Get something out of these coaches, because there's far more than just about walking in and putting a [business] card down and saying, 'Who do you got?' You may not have anybody and you may not have a player that comes out of your school and hadn't came out in eight to 10 years. That doesn't matter, because you will one day."

Jones said it's a plus Morris will run a Spread offense at Arkansas similar to what Greenwood uses.

"It's fun to have somebody in our state that's a great resource, that's as smart as Chad and his staff are and that we can drive 60 minutes up here to talk instead of having to go to Atlanta or Auburn like we have in the past trying to learn stuff," Jones said. "It's great to have it right here on the campus of the University of Arkansas."

Morris said he wants to be an inspiration for high school coaches.

"I'm hope," he said. "That's what I am. I'm hope, because there's a lot of high school coaches out there that are looking at me and looking at college coaches throughout that have had high school experience and saying, 'You know what? If that guy can do it, I can do it.' "

Jones said as excited as he is about Morris coaching the Razorbacks, he also enjoyed dealing with Bret Bielema, who was Arkansas' coach the previous five seasons.

"I have a great amount of respect for Coach Bielema," Jones said. "He's been good to my boys that have come up here and played. I appreciate what he did.

"But as a high school coach, I think it's fun for us to see that we've got one of our own coaching the Razorbacks."