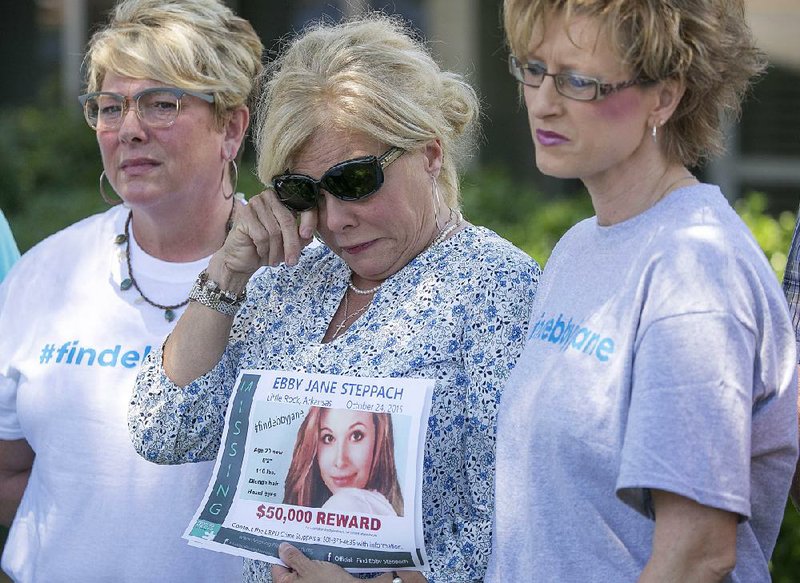 FILE — Laurie Jernigan (center), mother of missing teen Ebby Steppach, wipes tears while announcing a $50,000 reward for information about her daughter’s disappearance during a news conference at the Little Rock Police Department in June 2017. With her are Melissa Holman (left) and Tonya Crandall.

A Little Rock couple appeared on a Dr. Phil episode Friday to discuss their daughter’s disappearance in October 2015.

“It’s by the grace of God that we function,” Laurie Jernigan said on the show. At times speaking through tears, the woman described her efforts to convince law enforcement that her daughter, Ebby Jane Steppach, was taken against her will.

Steppach disappeared days after telling her stepfather she was sexually assaulted at a party. Two years later, she has not been found.

Laurie Jernigan and her husband, Michael Jernigan, told Dr. Phil that the Little Rock Police Department mishandled the investigation. According to the couple, the department delayed interviewing key witnesses and watching Wal-Mart footage that might have shown what their daughter was doing in the hours before she disappeared.

A few days after her daughter’s disappearance, Laurie Jernigan said, officers told her that her daughter’s cellphone was last used in the middle of the woods. When officers refused to search the area, she went herself, she said on the show. Police later informed her they had entered the wrong number, she told Dr. Phil.

“I believe we would know where our daughter is had they not mishandled her case,” she said.