Secret out as UA's Jones steps up 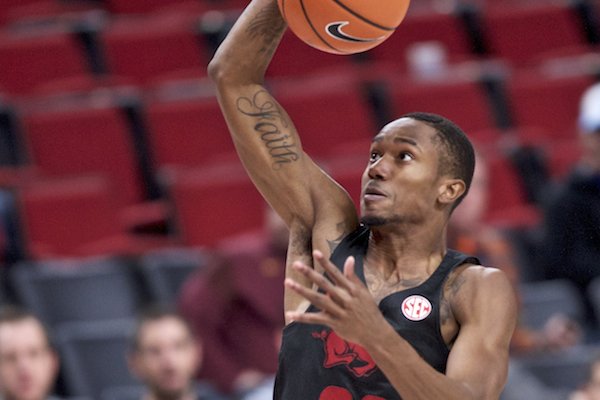 FAYETTEVILLE -- C.J. Jones has scored more points for the Arkansas men's basketball team in the past four games than he did all of last season.

"It's good for C.J. and us," Razorbacks senior guard Jaylen Barford said. "He's kind of our secret weapon."

The No. 14 Minnesota Gophers (8-2), who play the University of Arkansas, Fayetteville (6-2) at 5:45 p.m. on Saturday at Walton Arena, already might have Jones' name circled on their scoring report.

"He's playing at a high level," Razorbacks senior guard Daryl Macon said. "He's playing with a lot of confidence out there.

"This is what he wanted and what he's worked for, and I think it's all coming into his hands now."

Macon was limited to 23 minutes against North Carolina because of an ankle injury. Jones played 26 minutes off the bench and hit 4 of 10 three-pointers and had 2 rebounds and 1 steal without a turnover.

"When Daryl had to come out with the injury against North Carolina, my confidence just boosted," Jones said. "I've been carrying it on from there these last few games."

Arkansas Coach Mike Anderson said Jones has made a steady progression building on the experience he got last season and working hard over the summer and in practice this year.

Jones also is benefiting, Anderson said, from opponents focusing their defense on Barford and Macon.

"A lot of people think that's how you stop the Razorbacks," Anderson said. "So C.J. is getting more opportunities, and I think it's a credit to our guys that they're trusting him."

Jones hit 7 of 9 shots in Arkansas' 92-66 victory over Colorado State on Tuesday night, including 3 of 5 three-pointers.

"We're really good at getting players to have career-highs," Rams Coach Larry Eustachy said. "We're the team to play if you want to have your all-time game. But I think he's a terrific player."

The Razorbacks had six assists on seven of Jones' baskets, with four by Macon and two by Barford.

"Give the props to my teammates for finding me when I'm open," Jones said. "They're the ones giving me the ball when I need it and they know where I want it."

Jones is averaging 2.3 rebounds and Anderson said he's improved defensively and with his ball-handling. He had two assists without a turnover against Colorado State.

"He's playing the game the right way," Anderson said. "So his minutes will continue to go up.

"Now he's got a better sense of being in the right place at the right time. He's doing more things than just shooting the basketball."

Barford and Macon said Jones' commitment to defense is evident in practice.

"I think he's taking more pride in his defense now," Barford said. "I remember last year, he was kind of laid-back on defense and let people push him around. But this year he'll push you around."

"We put C.J. through a lot," Macon said. "When you practice against people that are physical and aggressive every day in practice, you have no choice but to get better."

Print Headline: Secret out as Jones steps up