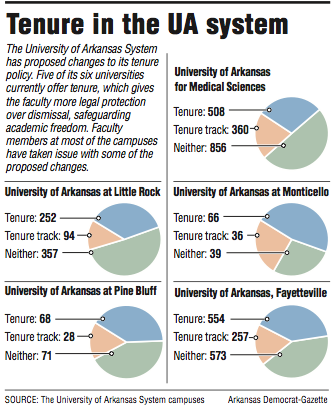 Graphs showing information about Tenure in the UA system

Faculty members at five University of Arkansas System campuses are waiting for a seat at the table.

In September, the system sent word to its campuses about proposed changes to its tenure policy, which lays out what faculty members have to do to earn the status, what their annual review entails and how they can be dismissed. System administrators initially gave until Oct. 20 for teachers to provide feedback with an aim of getting the proposal to trustees for a Nov. 9 vote.

But after an outcry -- concerns over job protection, academic freedom and the way the system developed the proposal -- the vote turned into an update item. And now, after the system has set up an email account for feedback and a frequently asked questions page -- and received comments from several faculty senate groups -- the professors are still waiting to be invited for a discussion.

"That's our No. 1 wish -- that we can sit down and work on this together," said Leanne Lefler, president of the academic senate at the University of Arkansas for Medical Sciences, Little Rock. "We can't understand why we can't get that and why it's taken so long when our mission is a shared governance mission. The involvement of faculty is critical to make this a good policy."

System administrators will review all feedback -- due Dec. 15 -- and now plan to offer opportunities to talk with faculty leaders after the start of the new year, said Nate Hinkel, director of communications for the system.

The American Association of University Professors with the Association of American Colleges and Universities created the tenure system more than 100 years ago in response to teachers being fired for the research they conducted or the views they held, said Adrianna Kazar, a professor of higher education at the University of Southern California.

"This was also the time -- particularly the 1890s when there was massive accumulations of wealth and certain powerful people -- before the Progressive Era, when there was backlash against powerful groups that were just wielding tremendous amounts of power," she said. "[The associations] came up with this idea that in order to ensure ability to conduct research and be able to critique decisions that were being made by powerful groups that they could be granted tenure to protect themselves from being fired willy-nilly."

Its creation also came at a time when institutions were competing for faculty members, and it was used as a recruitment tool, she said.

Today, tenure is still used as protection of academic freedom and as a way to recruit the best and the brightest academics.

Typically, universities hire assistant professors who undergo a probationary period of about five years. During that time, the assistant professors build a teaching and research portfolio to be evaluated in their sixth year as they apply for tenure and promotion. Granting of tenure would then come in the seventh year of employment at the same institution.

In March 2016, the UA System gave notice to the board of trustees that it would begin reviewing systemwide "administrative memoranda" -- historically issued by the system president to the campuses and units -- to align them with current law and practice, officials have said. The tenure policy was initially adopted in 1963, and it was last revised in 2001, according to the system's general counsel's office.

Though system administrators have discussed updating the policy for the past few years, it wasn't ready to present to the faculty until this fall, Hinkel said.

The faculty groups' concerns with the system's proposal are, in part, with the process the system and campus leaders have used to draft it. The UA System distributed it to the campuses Sept. 15, system President Donald Bobbitt met with chancellors Oct. 2, and system administrators originally planned to end a comment period for feedback on Oct. 20.

But some faculty members, including those at the University of Arkansas at Monticello, have said they hadn't even heard of the proposal until The Chronicle of Higher Education wrote a snippet on the matter Oct. 26. Groups at other campuses, including the University of Arkansas at Little Rock and UAMS, said they received the proposed changes a few weeks ahead of the first comment-period deadline.

"That's two weeks while we're doing classes and other activities," said Andrew Wright, UALR's faculty senate president. "And trying to get the entire campus to look at something -- that's a little short."

Those at UAMS thought it was "in raw draft form," Lefler said.

And many question the true motive behind revising the tenure policy.

If it isn't broken, why fix it? some are asking. One University of Arkansas, Fayetteville professor wrote that the impression of many at the university was that a "one bad apple/experience led the system's general counsel to propose the significant revision."

The system saw the need for changes to make the policy "clearer and more consistent," as it had been applied to different circumstances through the years, Hinkel said. As an example, the system eliminated titles that are no longer used and added titles that are now used and expanded reasons for suspending the tenure clock to align with changes in the Family Medical Leave Act, he said.

Other faculty concerns lie in the proposed policy's new grounds for dismissal and its changes to post-tenure review.

The UA System expanded its definition of "cause," stating that "a faculty member may be disciplined or dismissed for cause on grounds including but not limited to unsatisfactory performance." It then lists other reasons, including professional dishonesty or plagiarism and "unwillingness to work productively with colleagues."

The latter language is currently used in policies at UA-Fayetteville, said Kevin Hall, the president of that campus's faculty senate, but it's not a criteria in and of itself. It's related to the three things tenure-track faculty members are expected to partake in: teaching, research and service, he said.

But the system's proposed changes appear to be a fourth leg on that three-legged stool, he said.

Faculty have read "unwillingness to work productively with colleagues" as a "collegiality" component, which they said is highly subjective and not defined in the system's policy.

Faculty are also concerned that with the expanded definition of "cause" and the changes to annual review, the system's policy more easily facilitates dismissal.

Many letters from faculty groups expressed concern that just one overall "unsatisfactory performance" -- rather than two in a row or three in five years, in many cases -- could lead to a remediation plan, of which the system's proposal has allowed shortening to one year.

The problem with shortening that time period, faculty members say, is that they can't prove corrective action in just one year. As an example, if what led to the unsatisfactory rating was a question of publishing research in peer-review journals, the submission, review and publication timeline could "certainly" be more than one year, Hall said. If the idea is to get funding for research, that could take three to five years, Wright of UALR said.

Professors said they do not want to keep ineffective teachers on staff, but they want to ensure they have a fair shake.

Of the comments the system has received through feedback@uasys.edu, only one was in support of the changes.

James K. Hendren of Little Rock said he didn't know the specifics of the proposal, but that he "strongly support[ed] the idea of loosening the tenure policy."

In the email, which copied three trustees, Hendren wrote, "It is important to have a method to protect free speech and opinion, as professors sometimes are the leaders in bringing important thought provoking ideas to light, and we do not want to stifle that.

"But, a university needs to be able to clean out the deadwood or even a person being paid more than they are worth. Guaranteed employment does not work well in today's economy."

The faculty senate of a school outside the UA System, the University of Central Arkansas, adopted a resolution late last month condemning the proposed tenure policy revisions.

"Our fear was that even though the UCA board of trustees and upper admin had continued to reinforce to us that there was no such consideration here, we didn't want anything to detract from Arkansas' ability to have academic prominence on a national stage," said UCA's faculty senate President Taine Duncan.

"Any impact to reduce the possibility that we would have as diverse and robust academic conversations would have a trickle down effect of faculty and who we're able to invite as speakers. It would trickle down to students as well in their access to education and impact students who apply to schools in the state."

On Friday, UAMS' academic senate president-elect, Lee Ann MacMillan-Crow, passed along a change.org petition as a way to gauge how many faculty members opposed the proposed policy. As of about 2 p.m. Saturday, the petition had 292 signatures.

UAMS' academic senate will compile the data and make it available to the system and board of trustees, said MacMillan-Crow, adding that the academic senate would like to work with other campuses to start a similar effort.

UAMS' Lefler added: "We really feel like there's adequate time to work on a policy collaboratively and make it a win-win solution that meets everybody's needs."