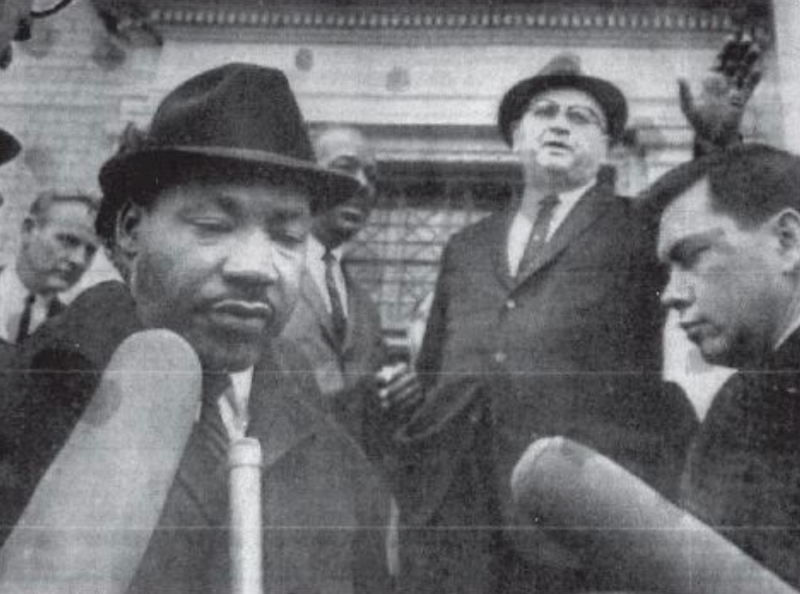 PHOTO BY SPECIAL TO THE DEMOCRAT GAZETTE Reporter Roy Reed (right) is among the journalists gathered outside the Selma, Ala., city jail when Martin Luther King Jr. was released from the jail after posting a $200 bond in this February 1965 photo.

Roy Reed planned to play golf that day, but he awoke early Saturday with a terrible headache.

Reed, 87, was taken by ambulance from Hogeye to Washington Regional Medical Center in Fayetteville, where doctors determined he'd had a hemorrhagic stroke, according to family members. Reed was kept on life support until his daughter could arrive Sunday night from Massachusetts. He died about 9:30 p.m.

Reed was a reporter for the Arkansas Gazette and New York Times. He covered the civil-rights movement in the 1960s, shadowing the Rev. Martin Luther King Jr. and witnessing the "Bloody Sunday" melee when police and a posse beat black marchers with clubs and bullwhips on the Edmund Pettus Bridge in Selma, Ala., on March 7, 1965.

"He was an historic figure, one of the greatest national correspondents of all time," Dean Baquet, executive editor of The New York Times, said in an email. "He was a great and lyrical writer who understood the South at a time when it was the center of the biggest story in the land. I met him when I was a young reporter in New Orleans -- which he covered for a while -- and I recall him as humble and truly decent."

Later, Reed was an author, professor and farmer.

Roy Reed was born on Feb. 14, 1930, in Hot Springs to Roy E. Reed, a mail carrier and later store owner, and Ella Meredith Reed, according to an article in the Encyclopedia of Arkansas History and Culture.

Reed grew up in Piney, 5 miles west of Hot Springs.

"I was barely old enough for small chores like gathering the eggs when I overheard my grandmother talking about me to my mother," Reed wrote in his 2012 autobiography, Beware of Limbo Dancers. "She said, 'That's the slowest mortal that ever lived.' I have tried to maintain that steady pace throughout my career. I have never deliberately busted a deadline, but I looked on them during my newspaper days as suggestions, like stop signs in Italy."

After his father bought the only store in Piney, a young Roy Reed began delivering groceries. Reed became friends with some of the store's black customers along U.S. 270 towards Mount Ida.

"That was the beginning of my interest in the way the black minority lived," Reed wrote in his autobiography. "I was 15 years old when I became a member of the civil-rights movement. I did not know that I had joined it; in fact, I had never heard of such a movement until years later."

Reed graduated from Lakeside High School in Hot Springs in 1947. He earned two journalism degrees from the University of Missouri -- a bachelor's in 1951 and a master's in 1954.

Reed worked for about a year, in 1953, as a reporter for the Joplin Globe in Missouri.

In 1952, he married Norma Pendleton of El Dorado. They had two children, Cindy and John.

After two years in the U.S. Air Force, Reed landed a job as a reporter for the Arkansas Gazette in 1956.

While at the Gazette, Reed covered the administration of Gov. Orval Faubus and years later wrote a biography of him.

Reed attended Harvard University on a Nieman fellowship in 1963-64, studying socialism and populism in the South, according to the encyclopedia article.

In 1965, he was hired by The New York Times. Reed moved his family to Atlanta and spent 10 months working in the New York City newsroom before he was dispatched to Selma.

A month later, Reed saw a crowd of 525 black marchers being attacked in Selma. Eighty-four were injured and 17 were hospitalized, according to an article by Reed.

It was a turning point in the civil-rights movement, Reed said in a 2015 interview with the Arkansas Democrat-Gazette. For the first time, people in living rooms across the country saw the violence on television.

"It sent a tidal wave of rage," Reed said. "I guess people in the North knew bad things were happening in the South, but this they couldn't avoid. It was right there on their television set, and it was so brutal."

In 1966, Reed covered the planned march through Mississippi by James Meredith, the first black student at the University of Mississippi. A white man shot Meredith outside Hernando, Miss.

"I missed the shooting because I had stopped for a cold drink at a little roadside store," Reed wrote in his autobiography.

His editor, Claude Sitton, was in New York scanning the wire photos coming back from the shooting scene.

"Meredith was only slightly injured," wrote Reed. "I redeemed myself with an exclusive interview in his Memphis hospital room the next day."

Reed spent so much time with Humphrey that he titled a chapter of his book "The Year I Lived With Hubert Humphrey."

In 1969, Reed became the Times' reporter in New Orleans, where he stayed until transferring to the London bureau in 1976.

Reed moved his family to Hogeye, 13 miles south of Fayetteville, in December 1978. He taught journalism at the University of Arkansas in Fayetteville for 16 years.

Patsy Watkins, a former chairman of the university's journalism department, said the awe for Reed among faculty and students bordered on reverence.

Reed was a bit of a rebel in the university environment.

Keeping a paper trail is important in academic life, but Reed didn't like wasting words or paper, said Watkins.

After a wire-service teleprinter was removed from the journalism department, Reed apparently appropriated the leftover paper, which comes on long rolls.

When a faculty member got a note typewritten on rough teleprinter paper, they knew it was from Reed, particularly if there were letters missing from a well-worn ribbon, said Watkins.

"It was a unique thing to him," she said. "Very short. No wasted words."

Hoyt Purvis, a former UA journalism professor, knew Reed when he was a Times reporter and Purvis was working in Washington as press secretary and special assistant to U.S. Sen. J. William Fulbright of Arkansas.

"I really consider Roy to be the gold standard, you might say, of journalism," said Purvis. "He excelled in all aspects of reporting and covered some of the major stories of our time, civil rights, Washington, all the things that were going on there, Northern Ireland ... And he was a good teacher."

Bill Whitworth of Little Rock, a former editor at The New Yorker and The Atlantic Monthly, remembered working with Reed in Arkansas.

"I started at the Gazette in 1960, with no experience except feature writing in college and during summers at the Arkansas Democrat," said Whitworth. "I learned to be a reporter by watching Roy, talking to Roy, and reading Roy's excellent pieces every day in the paper. He was a beautiful writer and a gifted, meticulous reporter."

"He never forgot his Arkansas roots," said Jordan, "through the breadth of his experience going back to his young days at the Arkansas Gazette to his monumental accomplishments."

Ernie Dumas, who worked with Reed at the Gazette, said he was "one of the most gifted newspaper writers of the era."

"He ought to be enshrined in one of the civil-rights museums, maybe Mississippi's, because he was that important to the civil-rights movement," said Dumas. "His gripping and detailed account of the police brutality at the Edmund Pettus Bridge at Selma in 1965, which led the front page of The New York Times the next day, had as much as anything to do with Congress's quick passage of the Voting Rights Act."

Dumas said the script of the movie Selma in 2014 closely tracked Reed's story in the Times.

John Lavelle, an actor, played Reed in the movie, dictating his story from a nearby pay phone while the attack was still underway.

Dumas said the Times later valued Reed more for his graceful writing than his coverage of the big civil-rights battles.

"After the civil-rights period in the '60s, Roy largely wrote timeless pieces about pretty mundane things -- elegiac, moody or fanciful passages about oyster fishing in Louisiana bayous, the cliff-side home and pub where the Welsh poet Dylan Thomas wrote and drank himself to death, or the heat and torpor of August in Hogeye, Arkansas," said Dumas. "The New York Times would run them on the front page."

Gene Roberts covered civil rights with Reed in the 1960s and was his editor at the Times in the 1970s.

"Roy was an exceptionally gifted writer," said Roberts. "And in the early 1970s helped lead the way to the then-gray New York Times becoming a more readable newspaper."

"In this region, a final purification of the soul is deemed necessary to prepare it for the rigors and temptations of the softball field, the swimming hole, the picture show and the long hours that will be spent lollygagging on the front porch consuming comic books and peanut butter," he wrote.

"The Lord gets His last chance this week, and then the citizens who are most vulnerable will be turned loose to face sloth and inertia on their own."

Reed began his 2012 autobiography on a somber note.

"I am old and full of days," he wrote. "They push me toward the ground like the summer sun. But I have work yet to do. My line is storytelling, and I have one more to tell before the days outnumber me and put me out of business."

At the end of the book, Reed said he thought the Times got its money's worth out of him.

"Even the hardiest reporter finally wears out," he wrote. "Most drift off into public relations, teaching or some other form of sloth." 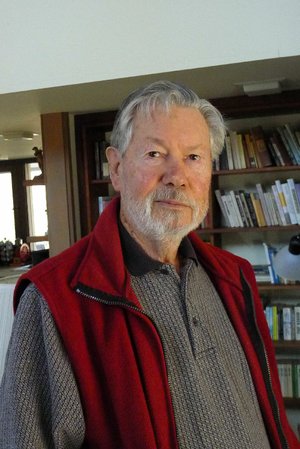