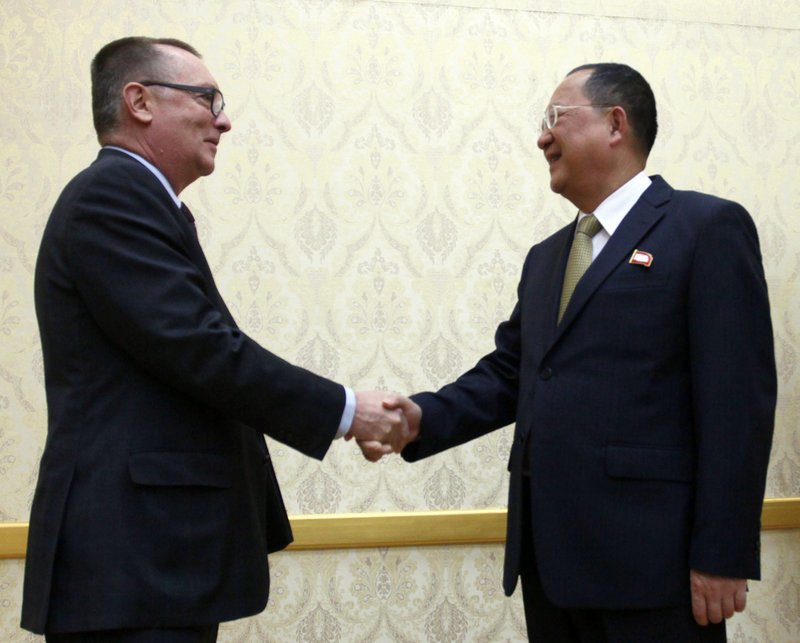 UNITED NATIONS -- The U.N. political chief said Tuesday that senior North Korean officials told him during his visit last week "that it was important to prevent war" over the country's rapidly advancing nuclear and ballistic missile programs.

Jeffrey Feltman told reporters after briefing the U.N. Security Council privately that "how we do that" was the topic of more than 15 hours of discussions he had with Foreign Minister Ri Yong Ho, Vice Minister Pak Myong Guk and other officials.

Feltman, a veteran American diplomat who is the U.N. undersecretary-general for political affairs, said he told the North Koreans that "they need to signal that they're willing now to go in a different direction, to start some kind of engagement, to start talking about talks."

He said he stressed "the urgent need to prevent miscalculation and reduce the risk of conflict" while he also underlined both the international community's commitment to a peaceful solution and its opposition to North Korea's pursuit of nuclear weapons.

He said he emphasized the importance of opening channels of communications "such as the military-to-military hotline to reduce risks, to signal intentions, to prevent misunderstandings and manage any crisis."

It was the first in-depth exchange of views between the U.N. and the Democratic People's Republic of Korea, the country's official name, in almost eight years.

"I think we've left the door ajar, and I fervently hope that the door to a negotiated solution will now be opened wide," he said.

Feltman said both sides agreed the situation on the Korean Peninsula is "the most tense and dangerous peace and security issue in the world today." He said they also agreed that his visit "was only a beginning and that we should continue our dialogue."

He said the U.N. and others are prepared to facilitate any new opening for talks.

Feltman's visit came at a time of heightened tensions between North Korea and South Korea, Japan and the United States, sparked by the reclusive country's frequent missile launches and recent nuclear test explosion, and particularly by its latest launch of a long-range ballistic missile that experts say could reach Washington.

Tillerson offered to meet the North Koreans without preconditions and said it was "unrealistic" to expect the country to come to the table ready to give up a nuclear weapons program that it invested so much in developing. He said Trump endorsed his stance.

Tillerson is expected to attend a Security Council ministerial meeting Friday at which the secretary-general will brief members. Feltman also is to attend.

Feltman, when asked about Tillerson's comments, said the Security Council is united on the need for a political solution, "so I would underscore that that was the message I took to Pyongyang."

"But we have to get there by opening the door to a different direction from the current trajectory" that North Korea is on, he said.

"They agreed that it was important to prevent war," he said.

Feltman said the North Koreans are very focused on the United States. But he and his team sought to get them to understand that whatever problems there are between Pyongyang and Washington, North Korea has a larger concern to deal with -- "which is that the international community does not accept its nuclear program."