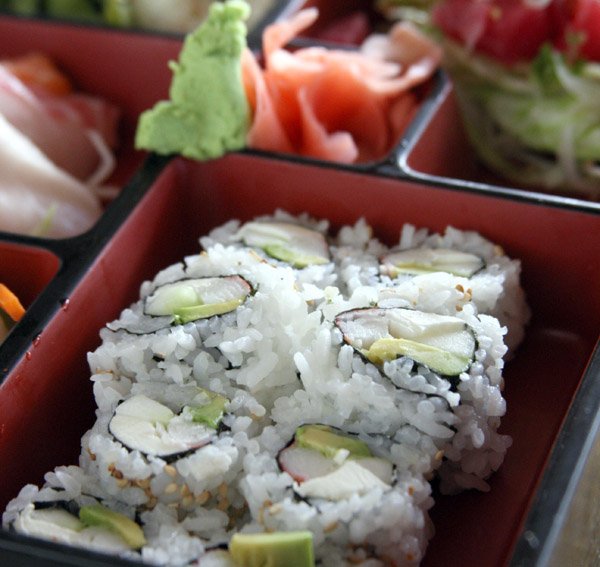 Sushi inside Bento Boxes at the Hanaroo Sushi Bar. ( Stephen B. Thornton)

A sign in front of the former Arkansas Burger Company building, 7410 Cantrell Road, Little Rock, says it's soon to be the home of Casey's Bar-B-Q. We do not yet know, but are checking to find out, whether it is, in fact, the reincarnation of the Casey's Bar-B-Q on Little Rock's Reservoir Road, which caused great wailing and gnashing of teeth when it closed after 22 years of business in 2005.

Wine Enthusiast Magazine has put the Sorghum Whiskey from Rock Town Distillery, 1216 E. Sixth St., Little Rock, on its list of the top 100 spirits of 2017. (See the full list at winemag.com/toplists/top100spirits2017.) If you're interested in such things, the distillery made its Sorghum Whiskey in summer of 2015 from a mash of 91 percent Arkansas-grown red sorghum grain and 9 percent malted barley, and aged it in new-charred, 15-gallon white oak barrels for 17 months. It's 92 proof. The magazine, which gave it a 93/100 rating and labels it, at $40 per 750 ml bottle, as a "best buy," describes it as "an unusual whiskey made from Arkansas-grown sorghum grain (not sorghum syrup) and malted barley ... . The end result is reminiscent of bourbon, with a deep amber hue and big, concentrated caramel, toffee, orange peel and spice. Water takes down the fire and flavor a notch, but still plenty of vanilla and creme brulee to enjoy. Sip or mix." Visit rocktowndistillery.com.

And a note to restaurateurs, hoteliers and publicans: If you're planning to open your establishment on Christmas Eve and/or Christmas Day, please hot-shot the information to us, that we may enlighten our readers in next week's (Dec. 21) edition. Email hours of operation, menu details, prices (especially if you're doing a buffet or prix fixe lunch and/or dinner) and the phone number folks will need to make reservations, to eharrison@arkansasonline.com.