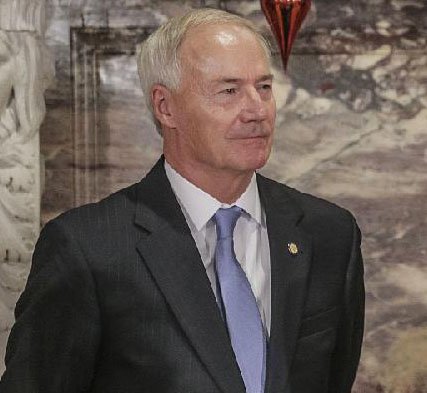 "It was important for them to hear exactly what the impact would be on Arkansas" if the nearly quarter-century-old agreement is abandoned, Hutchinson said shortly after the meeting ended.

If Trump were to terminate NAFTA, "it would be very harmful," the governor said. "I do not believe that is the goal of the administration. Their preference is that NAFTA be renegotiated in a way that's more fair."

The agreement "needs to be renegotiated. It needs to be modernized, and that is their preference, to make it more fair for the United States and North America," he said. "We'll see where the negotiation goes, but it was very important for Arkansas agriculture and Arkansas businesses that I was at least able to present the facts as to how important that trade is for our state."

"It was a great opportunity to showcase Arkansas being an important player in North American trade and global trade," he said.

In 2016, candidate Trump repeatedly criticized NAFTA, threatening to "tear it up," if Canada and Mexico were unwilling to return to the bargaining table.

In May, Trump announced that he would seek to revise the terms of the agreement.

Since then, talks have been ongoing.

Five rounds of negotiations have already occurred: a sixth is scheduled for Jan. 23-28 in Montreal.

At times, the president has expressed dissatisfaction with the other trading partners.

"We are in the NAFTA (worst trade deal ever made) renegotiation process with Mexico & Canada. Both being very difficult, may have to terminate?" he tweeted in August.

Talk of termination worries farmers, economic development officials and others.

Melvin Torres, director of Western Hemisphere Trade for World Trade Center Arkansas, says NAFTA needs to be renegotiated to reflect technological advances and other changes that have occurred over the past two decades.

But scrapping it altogether would be counterproductive.

"NAFTA works for Arkansas," he said.

Unlike the nation as a whole, the Natural State has a trade surplus with both Canada and Mexico.

Arkansas exports totaled $5.7 billion in 2016, with $1.2 billion going to Canada and $686 million bound for Mexico, according to the Commerce Department's International Trade Administration.

Trade between the U.S. and its two neighbors is substantial.

Talk of scuttling NAFTA is alarming for farmers.

"It would be really, really, really a big blow. ... Not only for agriculture, but for the whole economy of Arkansas and the nation as a well," said Randy Veach, president of the Arkansas Farm Bureau.

"If we lose this trade agreement, it's going to be devastating."

Veach said he's glad that Hutchinson is speaking out on trade.

"The president will listen to our governor," he added.