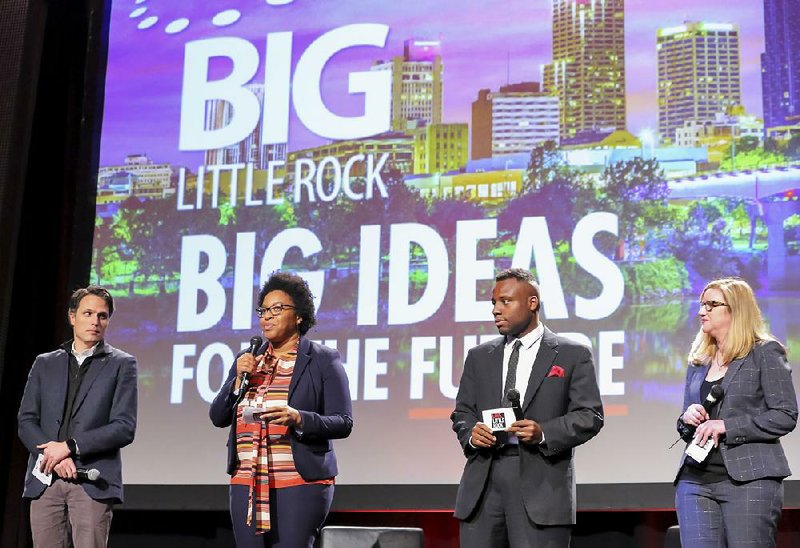 A group of young professionals backed by the Little Rock Regional Chamber of Commerce and a subgroup of business leaders unveiled an action plan Thursday that they said will make the Little Rock region thrive.

The plan has recommendations on correcting traditional downtown woes, such as limited parking, but also includes larger goals, such as expanding War Memorial Stadium and persuading Little Rock and North Little Rock to commit to 100 percent renewable energy by 2035.

Other suggestions include expanding the Little Rock School District's preschool program, creating an arts festival and a music festival, starting a new website that lists events and attractions in the region, creating a Pulaski County Juvenile Diversion Program and implementing a framework area businesses can use to better recruit and keep a diverse workforce.

Think Big is a group of about 100 individuals ages 25 to 40 selected by Fifty for the Future -- a collection of company executives and community leaders focused on economic opportunities -- to spend a year coming up with an action plan for improving the region.

"The goal for us and the mission was to improve the overall community for young professionals who were either looking at coming to Little Rock or who were born and raised in Little Rock and are considering if they want to stay here and raise a family here," said one of the group's co-chairmen, Amanda Richardson. "We really want to take the process from thinking big to doing big, and we consider the report that was released to be a playbook for that."

Many of the items listed under the seven categories the group looked at -- transportation and environment, public education, public safety, public health, diversity and inclusion, economic development, arts and culture -- are already underway.

Superintendent Michael Poore has had the goal of expanding the preschool program since he moved to the district from Bentonville.

He also brought the Restorative Justice discipline strategy that he implemented in Bentonville to Little Rock. The strategy aims to limit suspensions that keep children out of school.

Poore said that when he met with the Think Big education committee he quickly realized they "were drinking out of the same cup of tea."

"Creating more preschool slots is a big, big deal. It was in my first policy speech. ... It's one of the most successful things that we do by data. If you go look at kids who are part of our preschool program, no matter where they fall in terms of families and economics, they are much better prepared and test better in first grade," Poore said.

Another big recommendation from Think Big was to expand the uses of War Memorial Stadium in Little Rock.

The Arkansas Parks and Tourism Department, which controls the stadium, expects the completion of a feasibility study into future uses for the stadium to be completed in January.

"I'm very encouraged by what [Think Big] is looking at, even though we are already doing some of these things," Little Rock Parks and Tourism Director Grady Spann said.

The Think Big report recommended hosting high school and college sports at the stadium. High school football state championships are already hosted there. The University of Arkansas at Pine Bluff has football games at War Memorial, and there has been one Razorback game there each football season in recent years.

Other recommendations from Think Big included adding a track to the stadium to host local and statewide track and field events, recruiting promoters and vendors to sponsor events, converting the War Memorial Golf Course into a multipurpose central park with ball fields, and adding an amphitheater, skate park, climbing walls, dog park and food truck area.

Each action item in the Think Big report has a list of "next steps." Many include finding funding or grants.

Fifty for the Future created the Think Big Little Rock group and set aside $50,000 in seed money. Some of that was used over the past year as the group met to come up with the action plan.

The rest is available for the coming implementation phase. Some of the smaller items could be acted on right away with that money.

For example, the Economic Development Committee recommended creating a Connect 501 website that advertises the region's events. It's recommended that Think Big contract with a local firm to maintain the site for the next two years and to finalize the contract by Jan. 1.

Other recommendations, such as lobbying the state Legislature to expand tax credits to foster technology start-ups in the region, will take longer and require working with other partners.

The four Think Big co-chairmen presented their action plan to area business leaders Thursday at the chamber's annual meeting at the Statehouse Convention Center in Little Rock. They asked for feedback and for volunteers to help implement the ideas.

The complete action plan can be found on the group's website, thinkbiglittlerock.com.

The plan received positive feedback on Twitter after the presentation. Rock Region Metro tweeted that it was excited to implement some of the transportation recommendations. Becca Green, the transit agency's director of public engagement, served on a Think Big committee.

"It's not just Amazon looking for a connected city to house a headquarters," Green said. "With First Orion recently riding to their Argenta headquarters announcement on a Metro Streetcar, there's a real need to make sure Little Rock has a vision to share with other businesses looking to put down roots in communities that meet employees' changing mobility, housing and quality-of-life needs and wants.

"We also had a lot of interest in our recommendation to create a regional mobility authority that creates more funding for multimodal projects that can connect central Arkansas communities to each other. These are projects Metro can aid with staff expertise and that are very fitting for The Natural State's capital city," Green said.

Little Rock Mayor Mark Stodola said he's committed to combing through the Think Big report and getting started on the recommendations that are actionable in the near future.

One suggestion is to develop a Parking and Transportation Authority by 2020 and complete a parking plan by 2018. Stodola said he'd like to work with public and private parking space owners and develop a smartphone application that tells people what nearby parking is available.

"The ability for us to reach out and ask the 25- to 40-year-olds what they see for the future of our city is important," the mayor said. "They focused on some of the real important basics that we work on as a city at every level. ... In reviewing some of the areas, I agree with them. ... A lot of this requires substantial investment that doesn't exist currently, and so the question is, 'Where do you best focus your efforts?'"

He commended the group on developing a plan that is more than just a list of recommendations, but that also includes ideas on how to accomplish those goals, and for sticking around to help implement the ideas.