Clergy members from across Arkansas lament DACA's end in statement 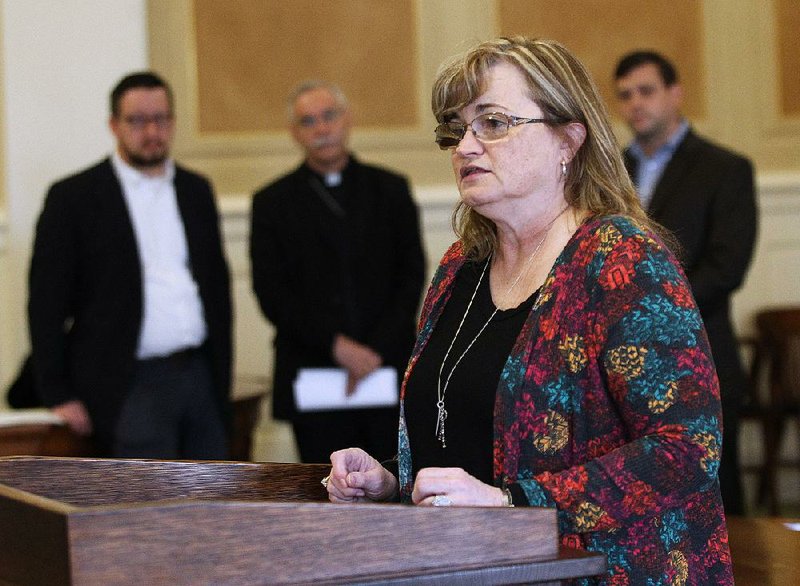 Pastor Melanie Tubbs of Augusta expresses concern about the end of the Deferred Action for Childhood Arrivals program during a gathering Monday at the state Capitol.

More than 100 clergy members from across Arkansas issued a statement Monday expressing "grief" over the end of the Deferred Action for Children Arrivals program and the lowering of refugee admission levels during a "global refugee crisis."

The clergy members also condemned ideologies of isolationism and nationalism.

"Walling out immigrants and refugees is not consistent with Kingdom assurance of security in Jesus, and placates the more racist and xenophobic elements of our communities," according to the "statement of unity." "We resolve to preach, teach, and advocate against the sins of oppressing the immigrants and sojourners in our midst, and excluding the millions of refugees abroad in need of refuge."

Arkansas clergy members held two news conferences Monday morning, one at the state Capitol in Little Rock and one an hour later at Good Shepherd Lutheran Church in Fayetteville.

"We're gathered today to speak as a unified faith voice," the Rev. Clint Schnekloth of Good Shepherd Lutheran Church, who spearheaded the effort, said at the Fayetteville news conference. "What we wanted to do is speak out very clearly about our grief and the end of DACA and our hope for a clean Dream Act by the end of this calendar year."

Dream is an acronym for Development, Relief and Education for Alien Minors.

Deferred Action for Children Arrivals, frequently referred to as DACA, is a program created by President Barack Obama in 2012 that protects about 800,000 people nationwide, including more than 5,100 in Arkansas.

The program has granted two-year work permits and deferred-removal status to people who arrived in the United States before their 16th birthdays and are living here now illegally.

On Sept. 5, President Donald Trump said he would terminate the program in March and asked Congress to come up with a replacement. Lawmakers are trying to find a bipartisan solution before the end of the year.

Mayra Esquivel, immigrant integration director with Arkansas United Community Coalition, said she is one of the "undocumented" people known as Dreamers. Esquivel, 26, moved from Mexico to Fort Smith when she was 3 years old.

"It means a lot to us to have you be here and be so outspoken about such an important issue, as we know how it relates to the story of Mary, Joseph and Jesus himself," she said, referring to all of the clergy members who signed the statement.

"We are seeing 122 Dreamers losing their status every day since Sept. 5," said Esquivel.

She said about 12,000 Dreamers are now in a "very vulnerable state," having lost their eligibility to keep jobs or continue going to school.

In Little Rock, Bishop Anthony Taylor said he spoke recently with a man who had no memory of his home country and spoke no Spanish.

Taylor and others noted the jarring nature of deportation for individuals and families.

"I think it's pretty clear what we would have done unto us if we were in this same situation," he said.

Pastor Melanie Tubbs of the United Methodist Church in Augusta noted the immigrant ancestry of most Americans and described the difference between countries as "an imaginary line drawn on a map."

In an interview after the news conference, Schnekloth said most of the clergy members were contacted by email and quickly signed on.

"I did have one say I was putting passion over orthodoxy," Schnekloth said, adding that there might be something wrong with that minister's orthodoxy.

Interfaith Arkansas Executive Director Rev. Steve Copley, who helped spread the statement outside of Northwest Arkansas, said reaction to the message online was generally receptive. No one responded negatively, he said.