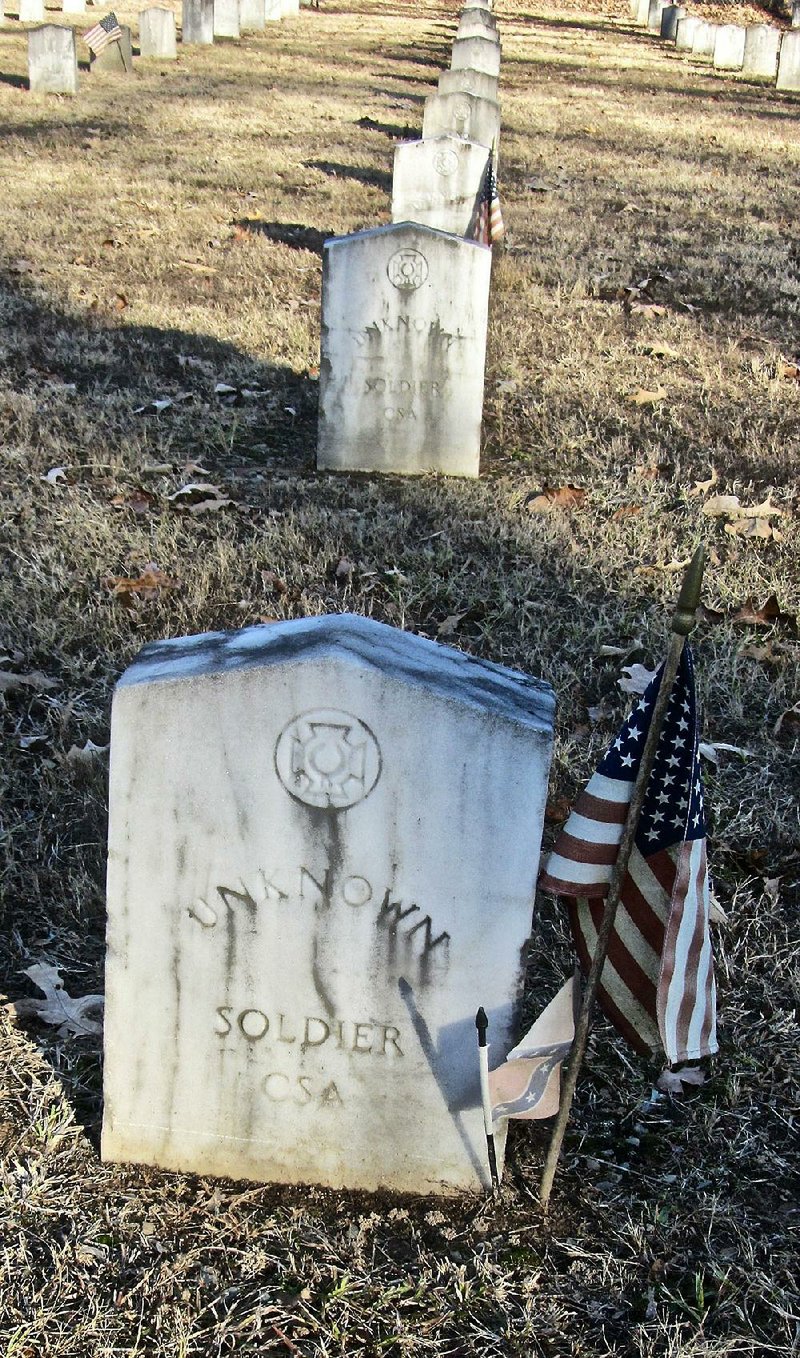 At Camp Nelson Confederate Cemetery near Cabot, a tombstone is marked by an American flag and a smaller Confederate flag.

CABOT -- One of the most melancholy settings in Arkansas lies about four miles southeast of Cabot.

In a fenced field next to a playground and several houses, 428 headstones mark the mass burial site of some 1,500 Confederate soldiers cut down in the fall of 1862 -- not by Union gunfire but rather by measles, typhoid, mumps and other contagious diseases.

These Civil War casualties lie in anonymity. Each tombstone bears a brief inscription: "Unknown Soldier CSA" -- but no name. Obscurity has swallowed up these sons, husbands and fathers.

This is Camp Nelson Confederate Cemetery, where visitors this month can observe small American flags planted at a dozen or more grave markers, along with a few miniature Stars and Bars -- emblems of the defeated South.

The fate of these unidentified Confederate States of America troops was all too common in the middle of the 19th century. Of the roughly 620,000 military deaths on both sides of the Civil War, it is estimated that three-fifths or more were caused by disease. That is hardly surprising, given the large numbers of men packed into unsanitary camps and the relatively primitive medical practices of the time.

Inside the black iron gate, a plaque placed by the Lonoke County Historical Commission sums up the cemetery's checkered history:

"Thousands of Arkansas and Texas Confederates were camped near this spot in 1862. The camp, named in honor of Brigadier General Allison Nelson, was stricken by disease resulting in 1,500 deaths including Nelson. The dead were buried among these hills and forgotten until 1906, when a group of Confederate veterans supervised the establishment of this cemetery. It was soon forgotten and neglected. In 1981, local schoolteachers and students restored the cemetery. It was rededicated in 1982."

At the center of the cemetery rises a 12-foot-tall monument, carved like the anonymous grave markers from limestone mined in Independence County. Erected in 1906 with money appropriated by the General Assembly, the marker stands in front of three flagpoles. They fly the flags of the United States, Arkansas and Texas.

The cemetery locale was known as Camp Hope when as many as 20,000 Confederate soldiers gathered in the area during the war's second year. According to the Encyclopedia of Arkansas History & Culture, "Life in camp was routine, with the exception of a mutiny in the summer of 1862 by a number of soldiers whose enlistment had expired. After the initial group deserted -- disgruntled by the lack of pay -- nine were executed to deter additional deserters."

After skeletons of the dead were unearthed in the surrounding countryside and reburied at their present location in 1905, yearly memorial services took place until the 1930s, when the last Civil War veterans were dying. After that, the cemetery became overgrown with vegetation, until the 1981 restoration supported by $23,000 in state money.

The General Assembly also established a $10,000 annual sum for upkeep, but it was discontinued in the late 1990s. Local volunteers now do mowing and other work to spruce up the site, which was placed on the National Register of Historic Places in 1996.

At least one of the 1,500 victims of the fatal contagions has a grave marked with his name. Mount Holly Cemetery in Little Rock is the resting place for Nelson, a former Atlanta mayor and Texas state legislator. Rank, as often is the case, has its privilege -- even after death

Information on Camp Nelson Confederate Cemetery can be found at arkansas.com and encyclopediaofarkansas.net. To reach the site from the Little Rock area, take U.S. 67/167 northeast to Arkansas 321 (Exit 16). Proceed east about 5 miles and turn left on Cherry Road, which is marked with a sign for the cemetery less than a mile ahead on the right.