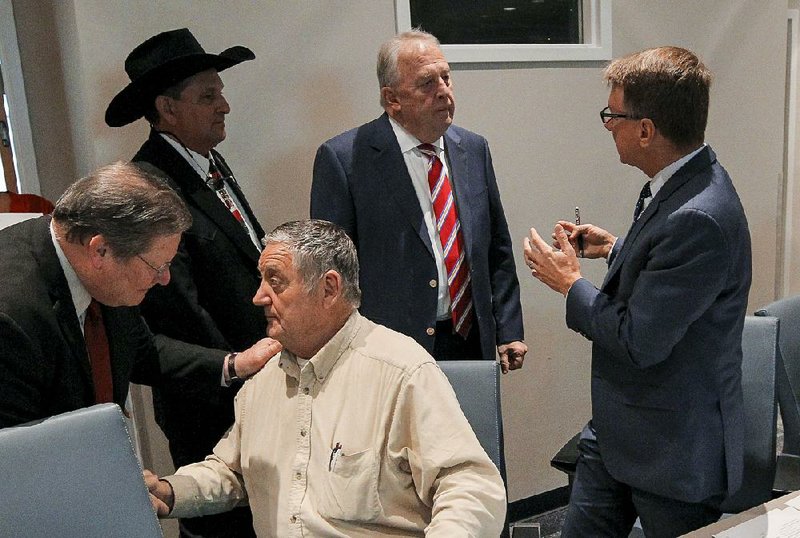 The $631.7 million Interstate 30 project and other transportation projects in central Arkansas remained on track Wednesday after two key votes by the board for the region's federally designated metropolitan planning organization.

One vote put the project to remake the 6.7-mile I-30 corridor through downtown Little Rock and North Little Rock on an "Agreed Upon List of Projects," a move that means the Arkansas Department of Transportation no longer needs to obtain any further approval for the project from the Metroplan board.

The other vote approved a new description in the region's transportation improvement program, which is the document containing the "Agreed Upon List of Projects," scheduled for the federal fiscal year beginning Oct. 1, 2018. The new phrase, "capacity improvements and reconstruction," now matches the wording in the region's long-range transportation plan, called Imagine Central Arkansas.

The state transportation agency's director, Scott Bennett, said federal regulations didn't permit him to move forward with the projects until the documents were identical.

The second vote means the Transportation Department will drop its hold on $242 million worth of road construction projects in central Arkansas. Only one project -- to install a traffic signal on U.S. 64 in Faulkner County -- was actually delayed. It and another project will be fast-tracked to be on the next list of projects on which bids will be opened Jan. 17, according to an agency spokesman.

The votes are expected to be the last involving the Metroplan board, composed primarily of the region's mayors and county judges, and remove, according to critics, a way for the region to have a say in the project.

After the votes, the next step for the I-30 project, also known as 30 Crossing, is completion of the environmental assessment of the project, which is expected early next month.

The assessment addresses environmental concerns, ranging from the project's impact on air quality to its impact on historic structures.

A draft environmental assessment is expected to be ready for federal review next month. Once the draft receives federal approval, it is expected to be available for public review, including a public hearing in January or February.

As early as March, the Federal Highway Administration will either approve the environmental assessment or direct the state Transportation Department to conduct the more detailed environmental-impact statement.

If the federal agency approves the assessment, the department will be able to issue a request for proposals from contractors interested in building the project.

The state department already has short-listed three contracting groups who responded earlier this year to a request for qualifications.

Agency officials said in October that they plan to spend the next several months meeting with each team individually to ensure they understand what will be expected of the team eventually selected for the project.

The team will be selected later this year, with construction expected to begin in early 2019 and take about four years to build.

Tab Townsell, the executive director of Metroplan, called Wednesday's votes moving the I-30 project along a culmination of 25 years of land-use decisions around the region that were different from the vision of the region outlined in the long-range transportation plan, called Imagine Central Arkansas.

The long-range plan, among other things, called for limiting area freeways to six lanes and steering the region to more transportation options beyond heavy reliance on vehicles and, instead, focusing more transportation spending on transit, cycling and pedestrian friendly infrastructure.

The I-30 project, which will be eight lanes or 10 lanes, depending on conclusions of the environmental assessment, goes against that vision, critics say.

But the cumulative effect of land-use decisions that led to more outward growth is a reality that's "different than our vision," Townsell said after the votes. "If we want to go back and achieve our vision, we better go back and make those micro-decisions in a different fashion that leads to a different reality."

The votes also reflected region-wide support for the I-30 project over the objections of a determined and vocal group of mostly downtown Little Rock activists and residents, he said.

"I think the region looked at it as a region," Townsell said. "There were elements of the city of Little Rock that didn't see the same way the region did, and that's unfortunate. It's always unfortunate when you don't get agreement, but it happens."

But Metroplan had long set its sights on improving the congested corridor, which features the convergence of six major highways in the space of fewer than 7 miles. The I-30 bridge over the Arkansas River dates from the late 1950s and was built at a cost of $5.5 million. It now carries 124,000 vehicles daily.

Wanda Crawford, acting director for Rock Region Metro, was the only vote against both resolutions Wednesday. The project "invests heavily in one mode of transportation, which is not in line with the long-range transportation plan for our region," she said.

She said other votes on the project earlier in the year were made with the understanding that a final vote wouldn't be made until after the environmental assessment was completed and a final decision made by federal officials.

Ahead of the vote, 168 people submitted input during a 15-day comment period that Crawford and other critics say was too narrow a window, especially as it fell during the Christmas holiday.

Of the people who commented, 127 opposed the project, 41 were in favor.

Opponents of the project, many of them downtown Little Rock residents, expressed concern over the project's impact on their quality of life and property values, said Casey Covington, Metroplan's deputy director. Though none suggested improvements were unnecessary, they questioned the need for a project of the magnitude of 30 Crossing.

Supporters liked the new downtown Little Rock interchange that Mayor Mark Stodola backed, along with the 17-acre park that would be created with the elimination of the existing Cantrell Road interchange and the increased safety the project would bring to the corridor, Covington said.

"You've had four public comment periods so far," said Barry Haas, an activist who opposes the project. "The public has weighed in overwhelmingly at every step of the process against this project."

But Jeff Hathaway, a developer and former chairman of the Little Rock Regional Chamber of Commerce board who has been heavily involved in the development of the project, said the business community is looking forward to the project.

"I do not believe this will be a gash or scar to our downtown," he said. "I believe the [new interchange] that has been put forth will be a beautiful addition to downtown Little Rock and North Little Rock."

Stodola said the city and its consultant for the project will remain heavily involved long after Wednesday's vote to ensure it is fashioned in a way the city supports. 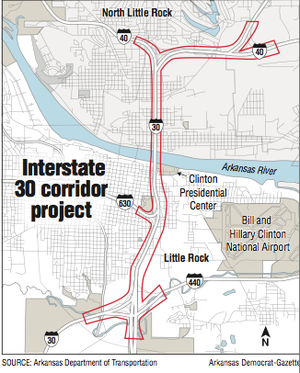