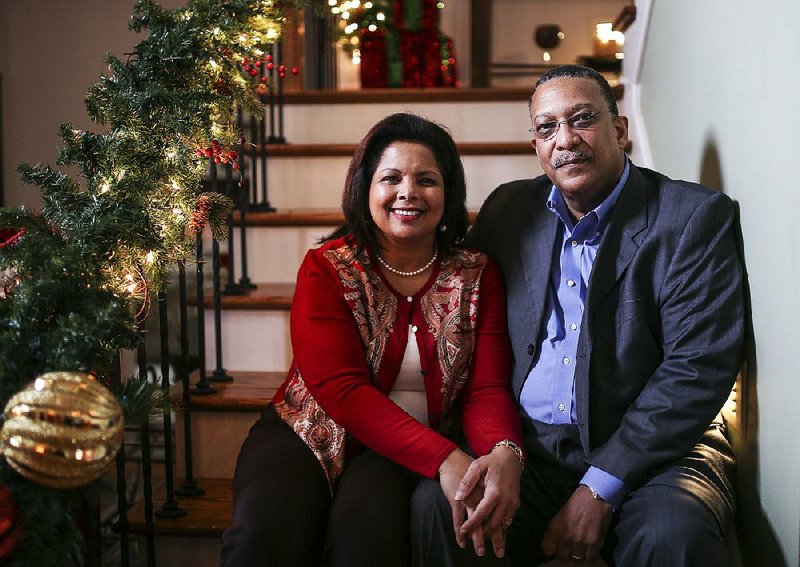 Yasmine and Ron Mathieu sit at their Little Rock home on Thursday. Yasmine says their kidney-transplant journey this year has changed them.

While it's not easy to call someone who faced an organ transplant lucky, that description would seem to fit Ron Mathieu.

When Mathieu, the executive director at Bill and Hillary Clinton National Airport/Adams Field, needed a new kidney, the search for a donor ended across his dinner table at home. Yasmine Mathieu, his wife of 28 years, was his match.

That is good luck. More than 80,000 people are on waiting lists for a kidney transplant, according to the Living Kidney Donors Network. Of those, 4,500 die each year waiting for the transplant that never comes.

But in March, the Mathieus' luck had seemingly and shockingly run out.

The Mayo Clinic, one of the world's leading hospital systems, sent Yasmine a letter dated March 8, a month before the couple was supposed to undergo the operations that would result in a new kidney for Ron.

"The surgeons reviewed your CT imaging and found that due to your kidney anatomy, you will not be an appropriate candidate for living kidney donation," the letter said.

Her kidney was normal and healthy, but it had more arteries going into it than the typical kidney, a complicating factor that cause many organ transplant centers to rule out donor candidates.

"I was devastated," Yasmine recalled. That was even before she had to break the news to her husband, who was on his way home from work. "We were at the end of our ropes."

Mathieu relished his job at the state's largest airport, a post he has held since 2008, and couldn't imagine not getting up to go to work.

But his kidneys were failing and had little more than 10 percent of their function. Without a transplant, he faced the prospect of going on dialysis. And soon. Such treatment is something thousands of people live with but with varying degrees of a normal life. Many go on disability and don't work.

Mathieu, a self-described hard-charging individual, began to contemplate a life without work.

The arrival of the Mayo Clinic letter "was the lowest point we had in all of this," Ron said, "because at that point we pretty much knew it was all over."

But Yasmine wasn't done. She recalled all of her research into kidney transplants up to that point and got back on the computer the same evening she got the letter.

"Keep pushing." Yasmine said. "Don't ever give up. In the end if I could, I would pick up his body and carry it over the finish line, I would. Just keep pushing."

She remembered that the University of Maryland Medical Center's transplant teams took on risky cases. The center's teams perform as many as 450 organ transplants a year, making it one of the busiest transplant centers in the United States.

Yasmine said she would always be grateful to Arkansas and the University of Arkansas for Medical Sciences, which did the workup that determined she was a match. "It immediately gave [Ron] a path," Yasmine said.

Arkansans waiting for kidneys also have shorter wait times for deceased kidney donors -- two years -- compared with the national average, which is five years, she said.

Still, the state has just one transplant center. "They're overwhelmed, and we had to look elsewhere," Yasmine said. "We have a gifted surgeon, but we don't have 10 surgeons. We were a very complicated case."

She sent an email to Dr. Stephen Bartlett, chief of surgery at the University of Maryland Medical Center, and retired for the night.

"It was like putting a message in a bottle and casting it out," Yasmine said.

At 4:30 a.m., the phone rang. Yasmine said she thought it was a business call from overseas.

But it was Bartlett. The skilled transplant and micro-surgeon -- he performed the most extensive face transplant attempted four years ago -- said the extra arteries in her kidney weren't an obstacle, told her to expect a call from his nurse and hung up. He had a plane to catch.

But at 7:30 a.m., a nurse on the donor team called her. The same day, Ron received a call from the recipient nurse. Even though they are husband and wife, transplant donors and recipients are dealt with separately throughout the transplant process, allowing the donors to back out at any time.

A month later, on April 6, the Mathieus were in surgery. Bartlett's team moved fast.

Yasmine underwent a new procedure in which her kidney was removed through the belly button, a method that speeds recovery time and leaves little scarring.

Another team, meanwhile, removed Ron's kidneys when typically they are left in the body.

A normal, healthy kidney is the size of a fist. Both of his were so large -- the size of two rugby balls -- that they had partially collapsed his lungs and pressed so hard against his stomach that it suppressed his appetite.

A third team, led by Bartlett, then transplanted Yasmine's kidney into Ron. Expected to last no more than eight hours, the operation took 10 hours and 15 units of blood after complications developed.

Ron and Yasmine, who are both 55 years old, had known since their third date, at the Fish Tales Seafood Restaurant on Long Island, N.Y., 30 years ago, that Ron might face the need for a new kidney.

That is when Ron told his future spouse that he suffered from a hereditary kidney ailment called polycystic kidney disease. His older sister, Betty, also has it.

Until 2½ years ago, the disease was manageable. But in March 2016, the Little Rock nephrologist who monitored Mathieu's kidney function told him his kidneys were failing.

"It was a ticking time bomb," Mathieu said.

It was almost as if their lives had prepared them for his illness.

Both were educated, successful professionals. Ron's airport salary, $222,400 in 2017, makes him the top-paid public executive in Little Rock. Yasmine is president of an international brokerage firm, traveling often overseas.

They tackled the transplant like their jobs. Ron's job, in particular, involves lots of planning, experience that paid off in researching the transplant. When dialysis looked likely, Ron turned his attention to what it would take to convert their Chenal home into a dialysis center for him.

Their older son, Elliot, also assisted. He had just graduated from Purdue University and was weighing job offers when word came that his father was getting a new kidney. Elliot returned home, drove his father to Baltimore and stayed with his parents throughout the ordeal.

"He was phenomenal," Yasmine said.

Even though Yasmine was a match, she had to lose weight to be within the guidelines for kidney donors. That meant she had to lose 20 pounds in three weeks. She did it, walking her hilly neighborhood two hours a day with weights on her wrists and ankles, all the while continuing to eat and ensure she would be healthy enough to have a kidney removed.

After the transplant, Ron returned to work in mid-June. He will have to take immunosuppresion drugs for the rest of his life to make certain his body doesn't reject the new kidney. They come with side effects. He also is limited in what he can do. No more swimming in a public pool, for instance, because of his suppressed immune system.

"The transplant is not a cure," he said. "It's a treatment. It comes with different issues. In my case, it is a change of life. And you have to take your medication."

Their journey has brought them closer together, too.

"It's changed us," Yasmine said. "We do not like to be physically too far away from each other. It's a transforming experience.

"I tease him now, 'You really are stuck with me for the rest of your life.'"