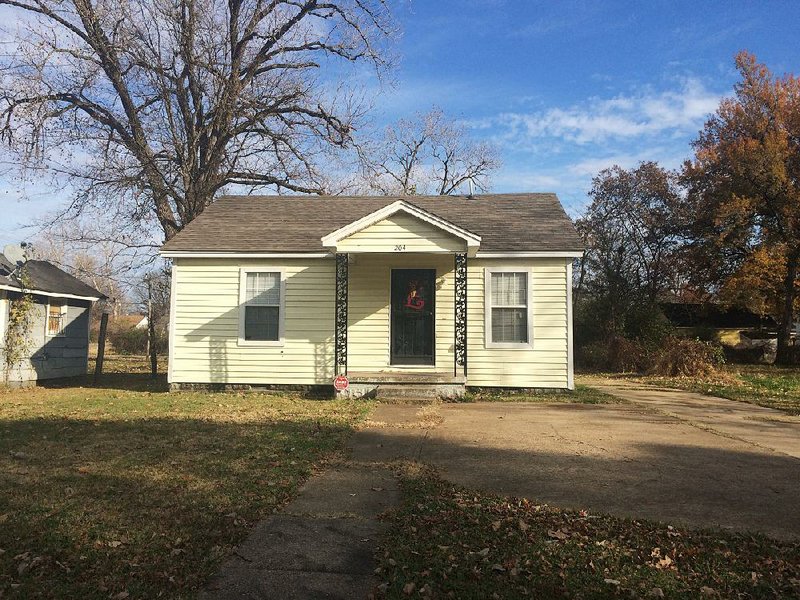 WEST MEMPHIS -- The application for $60,000 in Arkansas taxpayer money promised to help veterans in trouble.

The goal was to "get our homeless veterans off the streets" -- and "back on [their] feet," wrote a West Memphis nonprofit.

Four years after the grant's approval, the state's money is spent, and West Memphis has no house for homeless veterans.

Creative Strategies did buy a small home that it rents out, plus an empty lot.

Pulliaum acknowledges little progress on the project in at least two years. He and other organizers hope to revive the veterans housing idea if they can find more funding.

It takes just one Arkansas lawmaker to provide the money for a General Improvement Fund grant. The legislator who supported this one -- Rep. Fred Smith, Green Party-Crawfordsville -- left office in 2015.

"I had no clue it wasn't operating," Smith said recently. "I assumed it would go smoothly."

From their assigned shares of state surplus General Improvement Fund money, individual Arkansas legislators approved more than 4,200 grants totaling more than $50 million over the past four years, according to records obtained by the Arkansas Democrat-Gazette.

The newspaper's review came as federal authorities this year investigated at least $646,500 of those grants in Northwest Arkansas and Fort Smith.

This year, the Arkansas Supreme Court considered whether the grant program met state constitutional requirements, deciding Oct. 5 that it did not.

The newspaper reviewed the thousands of General Improvement Fund grants not known to be under federal investigation and found that many recipients submitted clear records of proposals to help the public, and receipts and invoices that show how money was spent.

Public schools and universities, cities and counties, for example, documented building improvements, equipment purchases, training and more, those records show. Nonprofits with long records of service, such as Boys and Girls Clubs, civic organizations and food banks, did the same.

The Democrat-Gazette's database of grant records also contained awards like the West Memphis veterans housing project that remain unfinished with no well-defined plan for going forward.

Other grants raise questions about how the project benefited the public. Still other grant recipients didn't submit spending records, so it's not clear exactly where the money went. Among them were:

• $50,000 to a marriage counseling nonprofit and ministry in Bentonville in September 2013. Sen. Bart Hester, R-Cave Springs, released the money from his General Improvement Fund share.

Records of the ministry's grant, like many in Northwest Arkansas at that time, contain no invoices or receipts.

Eagle Family Ministries, led by a husband and wife, organizes marriage retreats to Branson and helps low-income people in south Arkansas with food, clothing and other needs, its website says.

In 2013, the nonprofit proposed to build houses for low- and middle-income buyers and offer homeownership counseling. That has resulted so far only in the purchase of four empty lots.

• A $10,000 award to private Shiloh Christian School of Springdale in 2014 for a conference in "training and development of leadership skills" in Nashville, Tenn. Coaches and two players planned to attend, according to the grant application.

The request didn't provide the name of the conference or who conducted it.

Under a question about benefit for the public, the application said: "to help players and coaches become more productive in the community, which will have a positive impact on the economy."

Like the Eagle Family Ministries grant, Shiloh Christian's contains no records showing how the money was spent.

Woods and Shiloh Christian School officials could not be reached for comment.

The December 2015 award bought a 3-D printer for the college -- even though General Improvement Fund applications say the awards are designed for local governments and nonprofits.

The college closed its campuses nationwide less than a year later.

Rep. Fredrick Love, D-Little Rock, approved the grant. He could not be reached for comment.

• Two General Improvement Fund grants totaling $2,100 to SFC Arkansas Beagle Club Farms at Forrest City. The money in 2014 and 2016 was to clean up and repair property so the group could grow vegetables in high tunnels, the application said.

Beagle Club Farms advances interest in "AKC field trials" for the hunting dogs; encourages "sportsmanlike competition" for kids in sports such as field trials and shooting; and teaches children how to "grow, plant and harvest vegetables," according to the application.

The legislator behind the grant, Rep. Reginald Murdock, D-Marianna, said in an interview that he had heard that Gaines works hard to help kids. Murdock understood that the ground cleanup was necessary so the educational program could continue, he said.

"As more and more projects are funded each biennium, it has become increasingly difficult for the disbursement and use of funds to be properly monitored," auditors said in the report titled "General Improvement Fund Disbursements."

Auditors' recommendations included: Don't allow grant recipients to change their use of funds, add "a time requirement" for finishing projects, verify that projects do get completed, and require "adequate record maintenance for audit purposes."

Eligibility standards for applying for and receiving legislative General Improvement Fund grants varied across the state's eight planning and development districts since 2013, the newspaper's review found.

Most now contain language like the 2016 grant agreement used by the Western Arkansas Planning and Development District in Fort Smith.

General Improvement Fund grant projects should "assist local governmental jurisdictions and/or nonprofit organizations to plan, develop, promote and/or implement economic and community development projects." Those projects should "improve the economic, community and/or social well-being of the citizens of Arkansas."

The grants have been "the lifeblood for us doing improvements that went above and beyond," said Rison Mayor Vernon Dollar.

Dollar remembers a large culvert washing out on a heavily traveled road in the town of 1,344 people, closing the roadway to traffic. General Improvement Fund money helped get a quick repair and make the road stronger than ever.

"It was great," Dollar said.

But as federal investigations became public this year, Gov. Asa Hutchinson and legislators halted legislative General Improvement Fund grants for 2017. Since the state Supreme Court ruling in October, lawmakers and political observers have talked about whether and how to continue the grants and meet constitutional requirements.

"How do you go about curing a system that was born bad, grew up bad?" asked former Rep. Mike Wilson, D-Jacksonville, who twice successfully sued to have the program declared unconstitutional.

There are ways to build in safeguards for a revenue-sharing system like the legislative General Improvement Fund, he said.

"Create a state agency to handle the grants, make it subject to audit, put it under the direction of the governor, like any other state agency. Clean it up that way. Everybody knows how to do that," Wilson said.

But the big problem over the years, he said, has been a single lawmaker, or a small group, essentially deciding how to spend state money.

"That's the central bad seed in the scheme of things," Wilson said.

Planning and development district boards have to approve the grants after a legislator releases the money. Wilson and others have described that process as a "rubber stamp."

Murdock, who supported the Beagle Farms grants, disagrees: "I submitted the application to the planning district, saying I was OK with it, if it met the standards."

"Legislators, at least in my district, submit projects they could support. But the planning district's board of directors has to decide if those projects meet the standards," Murdock said. "That's their job."

While not all legislators agreed with that process, Murdock said, he would like credit given to those who followed it.

Then in January and March this year, Arkansans started paying attention.

The money reportedly went to private Ecclesia College of Springdale and the Decision Point alcohol-and-drug abuse treatment center of Bentonville and related entities.

In August, the FBI filed an affidavit that revealed another General Improvement Fund grant inquiry, into $46,500 to help Fort Smith build a ballpark complex.

The affidavit quotes a witness as saying current state Sen. Jake Files, R-Fort Smith, used $25,931 in cash from the grant to pay his employees, then stuck the rest in his pocket. No charges have been filed, and Files has denied wrongdoing.

Grant recipients reviewed by the Democrat-Gazette for this article don't face allegations of wrongdoing, according to lawmakers and grant administrators.

The newspaper did ask legislators and grant recipients how the money was spent, what happened to the projects and whether the grants were a good use of limited state funds.

Eagle Family Ministries' website describes its mission this way: "to equip premarital and married couples, single parent and traditional families with Biblical tools resulting in healthy relationships that lead to a lifetime of love."

One of the Bentonville ministry's offerings, the website says, is three-day, two-night "Making Room for Romance" marriage retreats in Branson, $499 per couple, or $399 with early bird registration.

The group's president, Steve Tucker, says he goes to church with Hester, the state senator who approved the $50,000 grant.

The grant application outlines several ways the ministry might spend the money: "general revenue for a variety of projects ... [that] include transportation, required insurances, support of children and families in poverty, education conferences for married couples of all ages and general budget support."

No receipts or invoices were required. Tucker said he would have been happy to provide them if anyone had asked.

Most of the money, he said, went to help poor residents in Wilmot in the state's southeast corner with food, clothing and shelter. It's an effort the ministry has undertaken since 2001, he said.

"Only about $5,000 went to scholarships for marriage counseling," Tucker said.

In an interview, Hester acknowledged that his $50,000 grant to Eagle Ministries was large by General Improvement Fund standards.

He said he hoped it would help "keep two parents together, keep fathers in homes," which studies show reduce foster care and prison incarcerations, he said. Hester also knew of the ministry's work in Wilmot.

"My only regret is I could not add an additional zero to that grant," Hester said. "Eagle Family Ministries are great people doing great work for the people of Arkansas."

Mid-State Affordable Housing Corp. of Benton began around 2006 as a nonprofit arm of the city's housing authority.

One for $85,000 was to buy four lots along Benton's Jefferson Street "for construction of new homes and related costs necessary for placing low-to-moderate income families," the application said.

The current board and leadership weren't part of the nonprofit when it received the General Improvement Fund grants, said Mark Johnson of Little Rock, Mid-State's interim executive director. And the group doesn't have records to account for the $30,000 in grants for counseling or foundation work.

Jeremy Hutchinson, the senator who contributed $35,000 to the project from his General Improvement Fund allotment, said recently that he had no idea the houses hadn't been built.

He favored the project when it was part of the housing authority.

"I think if I had known it was a nonprofit, that might have changed my decision-making," said Hutchinson. If the project is dead, "they need to sell that land and give the money back."

A renter pays a little more than $400 a month for the two-bedroom West Memphis house bought by Creative Strategies Community Development Corp. with a state General Improvement Fund grant.

The nonprofit's $60,000 award was supposed to house homeless veterans. The renter there today isn't a veteran.

Pulliaum says that when Creative Strategies first bought the house, a veteran did rent it.

"But she moved away to be closer to family," he says.

The rent charged is below market to help lower-income people, Pulliaum said. That rental income goes toward property taxes, insurance and maintenance.

Smith, the former legislator who approved the grant, said he hoped "everything would go forward as the plan was presented."

"Who doesn't want to help with a homeless shelter?" he said. 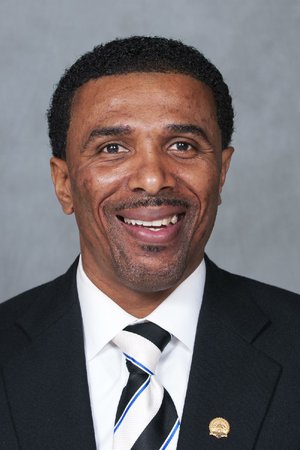 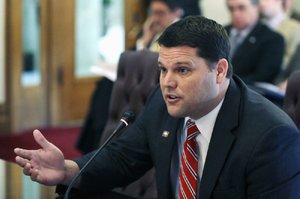 Photo by AP Photo/Danny Johnston, File
In this Feb. 5, 2015, file photo, Arkansas state Sen. Bart Hester, R-Cave Springs, speaks about his bill that would prevent local governments from passing their own anti-discrimination laws. 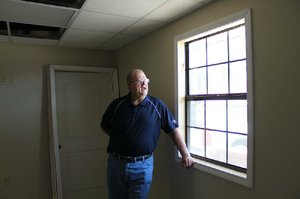 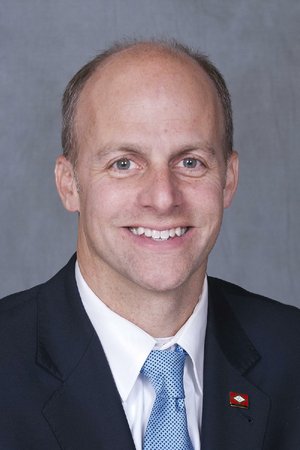