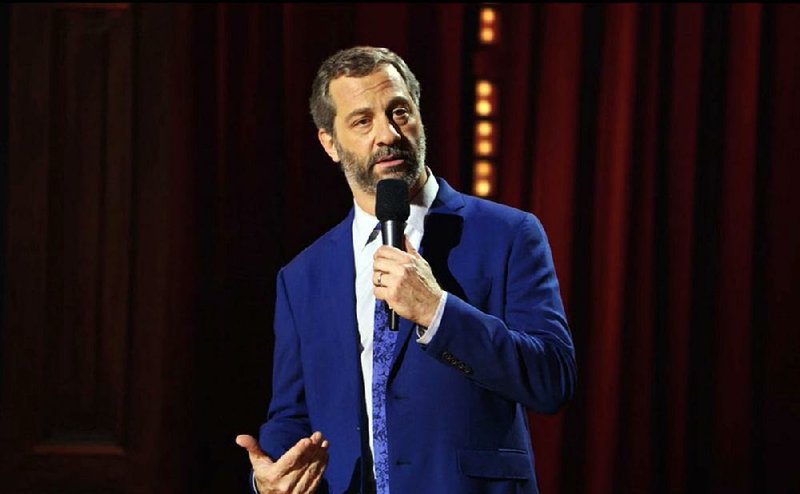 Filmmaker Judd Apatow is back on stage with a stand up routine in Judd Apatow: The Return.

His role is as writer and director. The urge hit him recently to return to his comedic roots and connect directly to an audience by performing standup, which he did from the ages of 17-24 in the company of other up-and-comers such as Jim Carrey and Adam Sandler. That's what's behind the Netflix comedy special Judd Apatow: The Return.

"I wanted to lower my salary and my self-esteem at the same time," he tells an affectionate audience in Montreal during that city's famous Just for Laughs Comedy Festival. The audience found that funny, along with much of the rest of Apatow's 69-minute performance.

And no wonder. Apatow's confident, acerbic, yet self-deprecating delivery of relatable tales focusing on fatherhood, social media, and growing older (he just turned 50) make for a comfortable get-together that feels like catching up with a long-lost friend who's skilled at amusing those around him.

Wearing an electric blue suit that stands out on a practically bare set, Apatow is relaxed, casual, and competent as he strolls the stage, making contact with audience members on topics that often involve his actress wife, Leslie Mann, (they've been married for 20 years) and daughters Maude and Iris (who have appeared in several of their dad's films).

Life with three women is a recurring theme as he rues the hours he's spent in Sephora and binge-watching hundreds of episodes of Friends with his daughters. He wonders if he's technologically deficient as he struggles to keep up with the girls' online fascination with Asian babies, dogs with backpacks, and fainting goats as seen on social media. Married couples will easily understand his description of the 15-minute argument he has with his wife every morning. The topic: Who slept worse?

"I've always wanted to be a comedian," he tells the crowd, then relates how he started working as a teenager at East Side Comedy Club on Long Island where he learned from the likes of Eddie Murphy, Rosie O'Donnell and Jerry Seinfeld.

He uses his own reality as a basis for much of his writing, he explains. "Like Love on Netflix [which has been renewed for its third and final season]: It's another show about a guy [Gus, played by Paul Rust] who's goofy looking who would never get a girl like that [Mickey, played by Gillian Jacobs]," implying that he is one of the few goofy looking guys who did get a girl like that.

Along with Apatow's spot-on impression of Bill Cosby trying to get out of the doghouse with his wife and some slapping around of President Trump ("Barron Trump is going to save us"), the show scores big with the comedian's use of slides to illustrate situations from his past, such as a graphic view of what happens when a college freshman drinks too much, efforts by him and his wife to make President Obama laugh, and embarrassing himself during a clumsy attempt to get Paul McCartney to meet him for lunch.

"I think when you don't speak directly to the crowd, you can get stale," Apatow was quoted in Vice. "Just the act of staying in a room and talking to groups of several hundred people tunes you into what people are thinking about and what they find funny. ... That's what standup comedy is all about: a communal moment." He got that right.