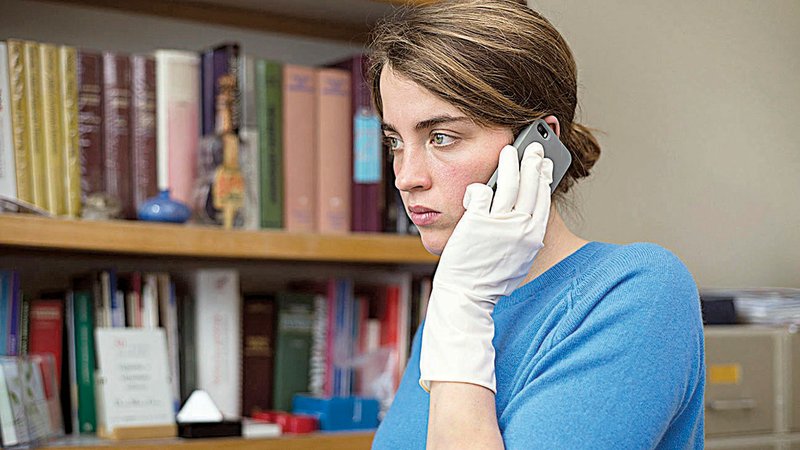 Some movies overstay their welcome.

Even a promising drama from Belgian masters brothers Jean-Pierre and Luc Dardenne (2014's Two Days, One Night, 1999's Rosetta, and 2005's L'Enfant, all winners of Cannes Film Festival's prestigious Palm d'Or), whose films concentrate on those who live outside the mainstream, can stick around longer than needed to make a point. You can only beat a dead horse for so long.

In French with English subtitles

That promising film is The Unknown Girl. It involves Jenny Davin (Adele Haenel), a doctor working in a bare-bones free clinic, who is about to advance her career by accepting a sought-after position at a well-funded medical center. As she and her intern Julien (Olivier Bonnaud) are closing the clinic during one of her last shifts, a frantic after-hours patient briefly struggles to get their attention. The intern wants to open the door, but Jenny, intent on asserting her authority over him, refuses.

Later, a teenage immigrant prostitute is found dead, and the clinic's security footage shows her to be the wannabe patient who was denied admission.

So how does that make Jenny feel? Guilty, right? Other than her remark, "If I had opened the door, she'd be alive, like me," delivered in a monotone, it's hard to tell, as Haenel's characterization is flat and cool. Emotions get in the way of a good diagnosis, she instructs Julien after berating him for panicking at the sight of a convulsing child. Although her actions show she cares about her patients' well-being and often goes beyond the medical realm to make their lives easier, her stony demeanor makes it difficult to take an interest in her.

Despite her apparent stoicism, atonement is on the way. With no fanfare, Jenny immediately abandons plans to take over the office with her name on the door at the prestigious medical center. Instead, she concentrates on free clinic patients (which includes house calls) while launching a time-consuming investigation to discover the identity of the victim (the cops haven't been able to do so) and figure out why she died.

This involves a lot of phone calls by Jenny, during which the viewer is subjected to seemingly endless waits while waiting for the recipient -- often a terse police officer who isn't happy with her attempts at amateur sleuthing -- to pick up. There are numerous scenes of her clad in a worn plaid wool coat and driving a beat-up hatchback across the old Belgian city of Liege (where the Dardennes set much of their work) to track down leads from furtive people (among them Jeremie Renier, a Dardenne regular who plays the father of a stressed-out teenage boy) who mutter gruff one-word replies to her questions. Lengthy, despairing looks are exchanged, but so are lies, and there's still a long way to go toward a solution.

That long way, and the awkward pauses for ringing phones and drive times, may cause even the most attentive viewers to start wondering what's on the menu at the pub across the street. Such distracting thoughts may prevent learning the outcome, which bolts into the film at the speed of light, and fades away almost as fast.