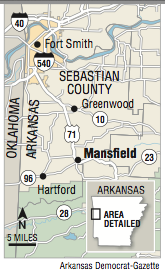 A map showing the location of Mansfield, Arkansas

MANSFIELD -- A veto by Mayor Larry Austin has blocked for now an attempt by the City Council to shift his mayoral duties to the recorder/treasurer.

The action occurred at a special meeting Thursday night during which council members and some of the 75 people packed into City Hall expressed frustration over a boil-water order that has been in place in the south Sebastian County town for more than three weeks.

The six members of the Mansfield City Council voted to amend the town's personnel policy handbook to remove duties assigned to the mayor and turn them over to the recorder/treasurer, Becky Walker. Walker said she was ready to take over.

The city's attorney, Matt Ketcham of Fort Smith, told council members the recorder/treasurer was a logical choice to take over the mayor's duties because she is familiar with the workings of the city. He also noted that the state statute on the mayor's powers and duties lists the recorder/treasurer as the first person to take over "if the mayor is unable to perform the duties of office or cannot be located."

Ketcham told council members they could not remove Austin from office, since he was elected to the position. There also were certain powers the mayor had by state law that the City Council could not remove.

But the City Council could remove or limit powers it gave the mayor, such as those in the city's policy handbook, he said.

Council members also voted unanimously to meet weekly instead of monthly so they could keep up with concerns facing the town of 1,139, such as the boil order and notification last month by the state of several sewer system violations.

Austin sat silently through the discussion and votes by the City Council, then announced he was vetoing both measures.

Ketcham told council members they could override the mayor's vetoes but would have to wait for the next regular council meeting Jan. 18 to vote. They then voted to hold another special meeting Jan. 4.

The Arkansas Department of Health invoked the boil order Dec. 5 after the town's water tower was damaged in a storm a day earlier.

Mabry said she has received complaints from constituents about the lack of potable water. She said one woman's toddler daughter has broken out in hives because she is allergic to algae.

"She is convinced it's from the water and thinks the city should do something about it," Mabry said.

She said she thought the boil order would remain in effect until the tower is drained and cleaned.

Austin gave a report during Thursday's meeting about steps he's taken since Dec. 5 to resolve the water problem. He said he's talked to the Arkansas Municipal League, engineers, tank companies and others.

He said he got a quote Dec. 13 for temporary repairs from tank builder Texas Aquastore of Sherman, Texas. A crew from the company made the temporary repairs Dec. 19 and 20. Parts for a permanent repair have been ordered but will take three to five weeks to arrive, Austin said.

City employees have collected water samples and sent them to the Arkansas Department of Health for testing. Samples sent last week still showed contamination, but Austin said new samples were sent in Thursday and he had expected to receive results from the health department Friday.

The results were not available late Friday afternoon.

James Forbes, county judge of Scott County, said Friday that Austin called him Sunday and asked him to declare an emergency so Austin could request assistance from the state Department of Emergency Management.

Forbes declared the emergency Monday, and the Department of Emergency Management arranged for a 5,000-gallon water tank from the Arkansas Army National Guard to be filled and taken to Mansfield for citizens to draw drinking water.