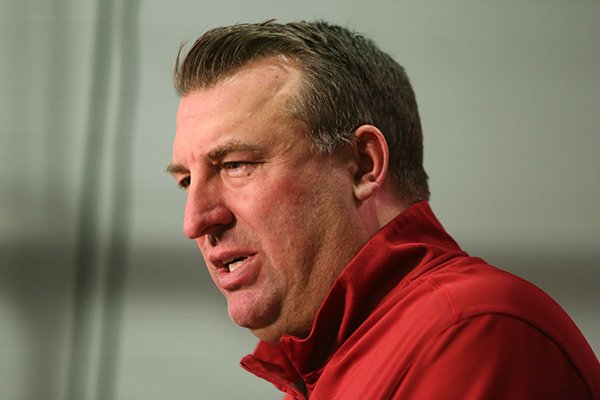 Arkansas head football coach Bret Bielema speaks with members of the media on Wednesday, Feb. 1, 2017, inside the Fred W. Smith Center in Fayetteville on the results from National Signing Day.

— Very exciting day. "I'd never had 9 guys come in at mid-term." Normally spends the night before checking with recruits, but this was a smaller group and they didn't have any significant surprises today.

— Have an extra scholarship they're still working on with a few options, including some that have popped up today.

— Right now, Ben Herbert is working with the team, including the early enrollees.

— Heavy emphasis on defense in the second half of the class.

— "Chevin (Calloway) joining us today was icing on the cake." Felt like they neglected the secondary, not on purpose, the last few years. Addressed that in this class.

— Not expecting any academic issues.

— Probably would have signed 12-15 guys if there had been an early signing period in December. That'll be a change next year if it comes through.

— On WRs: "We knew we were going to go after junior college guys." Brandon Martin was the No. 1 JUCO WR on their list. Took him out to the house and Jen thought he was a DE. Jonathan Nance will help. He and Michael Smith are studying film right now.

— "Koilan is probably one of the more underrated recruits in our class." Big body, great skills.

— Jarrod Barnes held Malik Monk to around 14 points in the state championship game. "You see what (Malik) is doing now." He can play multiple positions. Maleek Barkley and Devion Warren are versatile.

— On OL: "Kurt really went after a certain kind of guy." Didn't go after stars. Had done that the last few years and it hadn't really panned out. "We went after meat and potatoes. Guys that could get it done."

— Kirby Adcock can play inside or out.

— Shane Clenin could play any position on the line. Reminds him of Frank Ragnow.

— Blue shirts are guys they think they would sign next year with the development. Smaller in-state class in 2018 and Hogs will have a smaller class.

— Think they'll have TE Jeremy Patton last week in May.

— Hopefully the blue shirts don't get closed by the NCAA. Likes the ability to add them.

— Interviewed a couple coordinators who were 3-4 guys last time he had to hire a DC. "Everybody in this league plays a 3-4, even teams who were traditionally 4-3 teams." After the first month of the season, he knew he was going to change to a 3-4. He and E.K. Franks took the whole roster and divided it up into a 3-4 and set up their recruiting numbers from that.

— Thinks early enrollees are "an evolution." It isn't like a coach can walk in late and ask them to do it, because high school students would need to make the decision by their sophomore year. They'll bring it up to some young, good recruits. "The recruiting abuses I worry about have nothing to do with that."

— Like Daulton Hyatt's arm strength and demeanor. Has a leadership personality. An X's and O's guy who was raised well.

— David Porter is a very gifted football player. Was never a concern with his athletic ability, more about his classroom. Had a turnaround in the fall and has given up soccer in the spring to concentrate on school. "I didn't want to make an offer until I was confident it was going to happen."

— "We captured the commitment of every player we offered in the state of Arkansas." Other players went to Power 5's, but didn't have an offer.

— Hayden Henry is kind of a tweener safety-linebacker. Knew him, but started hearing about him more through 5 weeks of his season. Watched his film again, sent someone to evaluate and made the decision 4 weeks ago to pursue him.

— On DBs playing early: "It's like every position. If they're skilled enough, but they have to be able to handle the pressures."

— Chase Hayden is definitely a RB. "Have no intention of playing him anywhere other than RB." "Probably one of the more enjoyable athletes I've ever recruited." Likes to have complete opposites when he signs 2 RBs in the same class. He and Maleek Williams are different.

— "Maleek will get mad if I don't say he's fast. He's fast, but not as fast as Chase." Williams weighs close to 238, Hayden 188. Williams is comparable to Rawleigh Williams. Hayden is a jitterbug.

— Taking commitments from more recruits who hadn't yet visited is just them evolving.

— First started recruiting Chevin Calloway as a freshman. Known a lot of these guys for two, three, four years. Kyrei Fisher was a rare late addition. "Really grew a lot between his junior and senior year, in a good way."

— "I don't know where we're ranked. ... But I know this is the best class for Arkansas since I've been here."

— Been trying to get Eastern Oklahoma recruited more since he got here. Proximity wise, it's so great. "We've got good players from Oklahoma from good programs."

— "The very first moment, I knew Robb was gone, I called every defensive recruit and let them know what was happening." Never any indecision. Wasn't any backlash. Lost a kid a few days ago because they were running a 3-4, "but he went to a program that runs a 3-4. I had a hard time explaining that to him."

— This class is his best here because it addresses needs. To get the skill players on offense was huge. To get the secondary class was big. Good size on the defensive line at the ends for the 3-4.

— Calloway has great demeanor. "His maturity is beyond his years." Arkansas blood led him hear early on and then kind of pushed him away. He was going to play in an all-star game in December. He and Paul Rhoads had a one-on-one session about what he liked to do in the secondary. Gave him a take-home assignment he expected to be done in two weeks. Calloway called Rhoads the next day with the answers. Said the tips helped him in the Under Armour game.

—Kyrei Fisher is like a different player "and he made himself into that." Honed in on the last few spots left after the bowl game.

— On coaching: "We've snuck some guys in" to Fayetteville and on the road. Being on the road lets you do things under-the-radar. Was in contact with an NFL guy who got beat on championship weekend. In contact with someone coaching in the Super Bowl. "On Feb. 20, we'll be back in the office getting ready for spring ball" and they'll have everyone by then.

— Thought the 10th coach was going to happen for sure. Now operating with the assumption they'll only have 9 going into the fall.

— Early enrollees are on the rise because you get them in spring ball, so it's added time for growth. Takes some groundwork to get it done, because the athletes have to focus on it early.

— "We've got a great jump on 18." Talked to more than 30 juniors and a few sophomores they've offered. From about 10:30-12:30 today, did nothing but call those recruits. "We're starting to have a brand out there offensively and now with the 3-4 that people can gravitate to."

— Brings up Trey Flowers to his team a lot. Have a few connections on the Patriots. Flowers is as humble as ever.

— Had a pretty good idea Calloway was going to come to Arkansas. Gave him a little heart-stopper last week, but didn't say what he was going to do. Tried to get his last visit. People were messing around with Montaric Brown until the end and Jarques McClellion had another SEC school come after him today. Says a lot about the kids they recruited that they stuck with it.