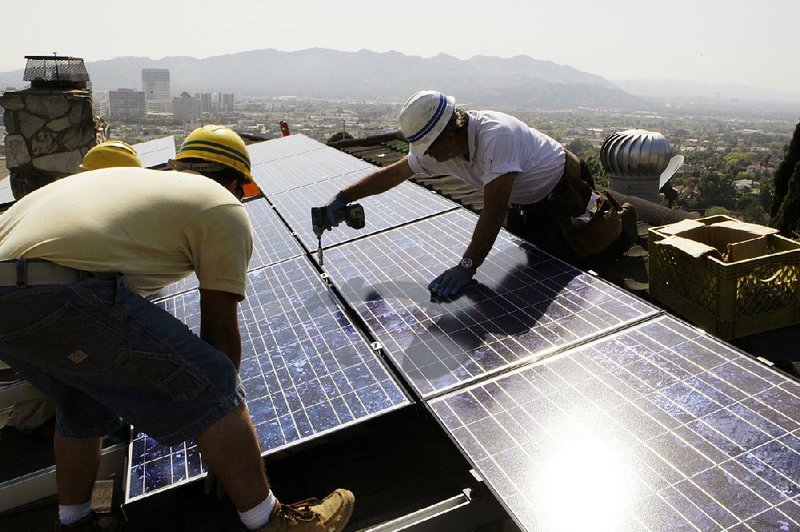 The renewable-energy industry has a message for President Donald Trump's administration about creating energy jobs in rural communities: Get out of the coal mines and look to the sky.

U.S. wind-farm developers and suppliers had more than 100,000 workers at the end of the year, and the solar industry had more than double that, and they're a significant source of employment in many of the rural states that supported Trump's campaign. That compares with 65,971 coal mining jobs at the start of last year, according to the U.S. Energy Department.

Leaders of the solar and wind industries say the rural areas that otherwise missed out on economic growth over the past decade are benefiting from the expansion of clean energy. And that growth isn't driving the collapse of coal mining, according to Abigail Hopper, the recently hired chief executive officer of the Solar Energy Industries Association.

"I reject the idea that there has to be a winner and a loser," Hopper said in an interview Tuesday at the trade group's Washington headquarters. "These are good paying, local jobs that the solar industry is creating everywhere."

Hopper is urging the Trump administration to continue to support pro-solar policies that helped create more than 200,000 jobs in the past decade, many with the more than 9,000 mostly small businesses that deliver and install panels.

"They did it for economic reasons, for consumer choice and for energy independence," said Hopper, who joined the Solar Energy Industries Association after serving as director of the U.S. Interior Department's Bureau of Ocean Energy Management. "These are all things that conservatives support."

That support hasn't been a boon for solar investors. The Bloomberg Global Large Solar Energy index has dropped almost 13 percent since Trump was elected, compared with a 6.7 percent gain in the broader S&P 500 index.

The top 10 congressional districts for wind energy are all in Republican-dominated states such as Iowa and Texas, according to American Wind Energy Association Chief Executive Officer Tom Kiernan.

"We're hiring workers in the Rust Belt," Kiernan said in an interview. "We're helping families keep farms they've held for generations. The lifeblood of our industry is in rural America."

As a more fossil fuel-friendly Trump administration takes shape, both Hopper and Kiernan want the new president to maintain two key federal tax credits that received extensions from the Republican-controlled Congress at the end of 2015. While Trump during his campaign criticized wind turbines as bird-killers, his pick for energy secretary, former Texas Gov. Rick Perry, helped his state become the largest producer of wind power.

Wind-power developers expect to attract $60 billion in private investment under existing tax credits over the next few years as installations ramp up, and plan to double the power sent to the grid to about 10 percent, from about 5 percent today.

That and the built-in sunset provisions that came with the tax-credit extensions may help preserve the policies as Trump and the Republican-controlled Congress consider changes to the tax system.

"Everyone we talk to says, 'We already adjudicated that in 2015,'" said Christopher Mansour, vice president of federal affairs at the Solar Energy Industries Association. He said the group would be willing to give up the investment tax credit if the fossil-fuel industries gave up their financial incentives, too.