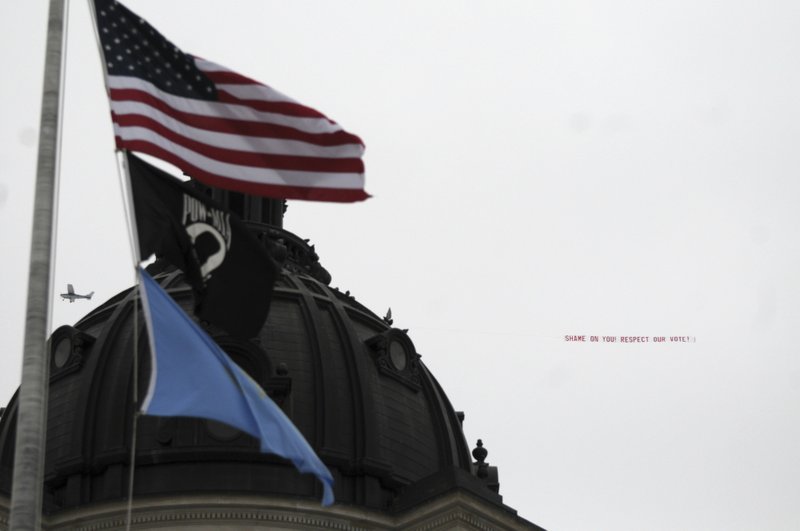 An airplane circles the South Dakota Capitol in Pierre, S.D., with a banner that reads: "Shame on you! Respect our vote!" on Wednesday, Feb. 1, 2017.

PIERRE, S.D. -- New ethics regulations that South Dakota voters approved in November were all but stripped from law after the state Senate voted Wednesday to send a bill repealing them to Gov. Dennis Daugaard.

The chamber voted 27-8 to pass the repeal bill, which the Republican governor has said he supports. It would dismantle a ballot initiative approved by 51.6 percent of state voters that instituted a public campaign finance system, created an ethics commission and tightened campaign finance and lobbying laws.

The ethics crackdown is one of several November ballot measures that are now facing scrutiny in statehouses across the nation. But the South Dakota law appears to be under the most imminent danger of repeal and directly affects the very lawmakers who are weighing its fate.

Backers have criticized the GOP-controlled Legislature for working to overturn the result of the election. The bill was approved by a 54-13 vote in the House before heading to the Senate.

Many South Dakota residents feel disenfranchised, said Teryl Cruse, a massage therapist from Pierre who looked on from the Senate gallery before the vote. The 61-year-old said she wants all citizens to feel like their voices are being heard.

"When an initiative is passed by the people, it should stand," Cruse said. "Our representatives are indeed supposed to represent us, and I think we've gotten away from that."

Under the new law, voters could tap a state fund to give two credits worth $50 each to participating political candidates. It limits lobbyist gifts to lawmakers to $100 annually, a major change given that there were previously no caps. It also calls for an independent commission to ensure state ethics laws aren't violated and to administer the public campaign finance program.

Top Republican lawmakers contend those provisions are unconstitutional. They challenged the overhaul in state court, which put the initiative on hold while the case moves forward.

Senate President Pro Tempore Brock Greenfield, the bill's Senate sponsor, said the campaign for the ballot measure was based on innuendo and falsehood. Republicans have criticized advertisements during the campaign depicting lobbyists handing officials cash, calling them deceptive.

"I can tell you that I've never known anybody to accept a bribe. I've not known anybody to offer a bribe," Greenfield said. "In South Dakota, while we're not infallible, that has never been a concern."

An emergency provision means the bill would take effect immediately and couldn't be referred back to the ballot.

GOP Sen. Lance Russell, among the few Republicans in the Legislature who opposed the bill, said it may be the most "repugnant display of raw partisan political power" that he's seen.

Lawmakers have filed several proposals that would supplant provisions of the initiative, including similar restrictions on lobbyist gifts and more limited watchdog commissions. Republican Sen. Al Novstrup said the only path forward was to repeal and replace the initiative.

"Every legislator in here is committed to doing the right thing," he said.

Ballot-measure supporters have criticized the replacements as toothless.

Represent.Us, a Massachusetts-based organization that pumped funding into the South Dakota ballot-measure campaign, has spent more than $39,000 in January trying to save the law. The group has targeted Republican lawmakers with newspaper, radio and online advertisements, mail pieces and telephone calls.

Supporters of the ballot measure packed the Senate gallery to watch the debate, and an airplane circled the Capitol for hours with a banner that read "Shame on you! Respect our vote!" More than 30 people marched and protested carrying a banner or signs after the Senate approved the bill.

Rapid City resident Michelle Smith said before the vote that it's wrong that the voters' voice is being overturned. She cast a ballot for the initiative and came to the Capitol to support it.

"I've spent a lot of time saying, 'Somebody needs to do something,'" Smith said. "I'm somebody."