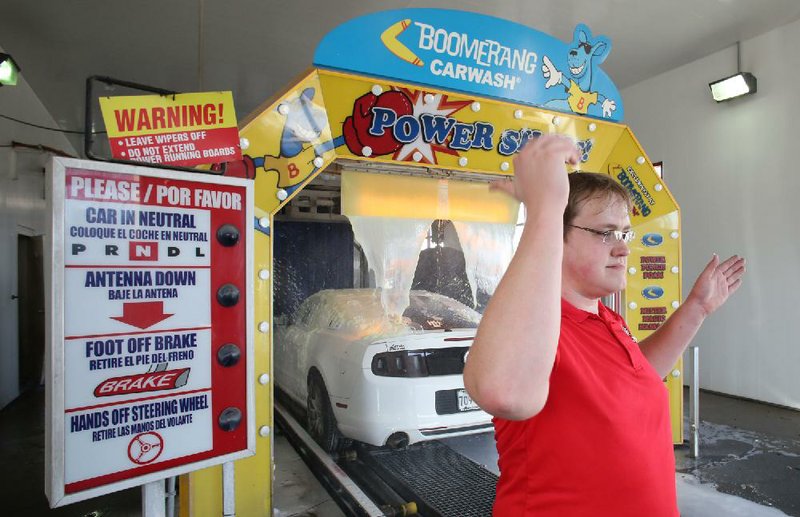 Eric Osburn, assistant manager at Boomerang Car Wash in Fayetteville, directs vehicles. The operation is now part of the Zips Car Wash Chain and will eventually be rebranded. 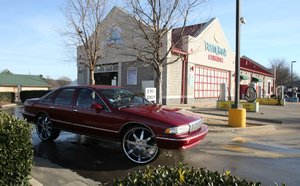 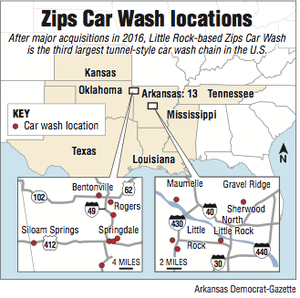 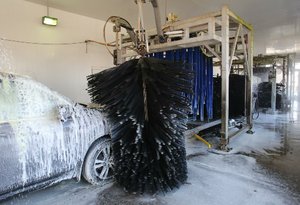 Photo by David Gottschalk
A car enters the wash bay at a Fayetteville carwash recently acquired by Zips Car Wash. The carwash is in acquisition mode and tripled in size in 2016. 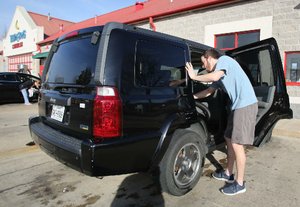 In August, Zips bought Boomerang Car Wash, adding 31 new operations to the company's existing 21 stores. The acquisition makes Zips the third largest conveyor or tunnel carwash chain, based on a list compiled by Professional Carwashing and Detailing, a trade publication.

Brett Overman, Zips' founder and chairman, said the rapid expansion has been stressful at times, but it has taught him the value of his employees. He said the 400-plus who work at Zips are key to the chain's continued success.

"Team members are vital," he said.

The company is still rebranding its new locations with signs being changed out region by region. The company also is rolling out a "wash club" that allows unlimited monthly washes for a set fee ranging from $14.95 to $29.95.

When entering a typical Zips Car Wash, users can select and pay for several types of wash and wax options at a drive-up station. They then, under the direction of an employee, drive their car onto a device that pulls the vehicle through a long, covered bay.

As it is slowly pulled along, the car is cleaned by whirling brushes and the arms of squid-like scrubbing cloths, and finally blown dry. A wash takes about three minutes to complete. The company also offers free use of high-powered vacuum cleaners on the site so customers can clean the interior of their vehicles.

When adding up the carwashes acquired before the Boomerang deal, and the recent purchase of four CarbuX Car Wash locations around the state and a Splash Car Wash in Conway, the company now has 60 carwashes in Arkansas, Oklahoma, Kansas, Texas, Florida, North Carolina, Mississippi, Louisiana and Tennessee.

That total puts Zips ahead of former No. 3 carwash chain Wash Depot of Massachusetts, which had 51 locations, according to Professional Carwashing and Detailing's 2016 list. To make its way into the No. 2 slot, Zips will need to add 15 locations to beat North Carolina-based Autobell Car Wash's 74 spots.

"We should be the second largest by the middle of the year," Overman said. "We expect to wash seven million cars in 2017."

Zips will have to see a lot of growth to challenge the largest chain, Mister Car Wash of Tucson, Ariz., with its 174 locations.

When it was founded in 2004, Zips was based in Jonesboro. The company grew slowly over the years until Overman found a lender to back his ambitious expansion plans. The business is capital intensive, with a tunnel carwash valued at anywhere from $3 million to $5 million each, he said. Overman expects to add 30 to 35 more carwashes in 2017.

Carwash and auto detailing in the United States brought in an estimated total annual revenue of $10.2 billion in 2016, with profit of $1.89 billion, according to research company IBISWorld. Nearly 50 percent of operations in the segment are conveyor or tunnel-type carwashes, as Zips are. Of the rest of the segment nearly 18 percent are detailing operations, 11.4 percent in-bay automatic carwashes, 10.8 percent self-service bays and 10.4 percent hand-washing businesses.

According to the IBISWorld report, the segment has seen steady growth over the past five years, with, on-average, an estimated 3.1 percent annual revenue gain. Analysts attribute the sales increase to rising employment, more disposable income and increased car use because of lower gas prices. The sector is expected to see continued, but a little more subdued, growth over the next five years, with IBISWorld predicting average annual growth of 1.6 percent and total revenue hitting $11 billion in 2021.

The International Carwash Association estimates there are about 80,000 professional carwashes in the United States, with about the same amount in Europe. More than 2 billion cars visit carwashes annually in this country, according to the association.

Overman says it's the guy or gal who chooses to wash his own car that's his primary competitor. He notes that carwashes use 20 percent of the water typically used when a car is washed at home and that the soaps used are biodegradable and dirty water used in a tunnel carwash is reclaimed.

"It's our job to educate the consumer," Overman said.

In the end, he said, Zips Car Wash isn't just selling a service, because when it's all said and done, a clean car is more than just waxed metal gleaming in the sunshine.

"It's almost a mood lifter," he said of a squeaky clean car. "I think it raises people's spirits."