Just dandy at Vandy: Willis knows his way around Walton 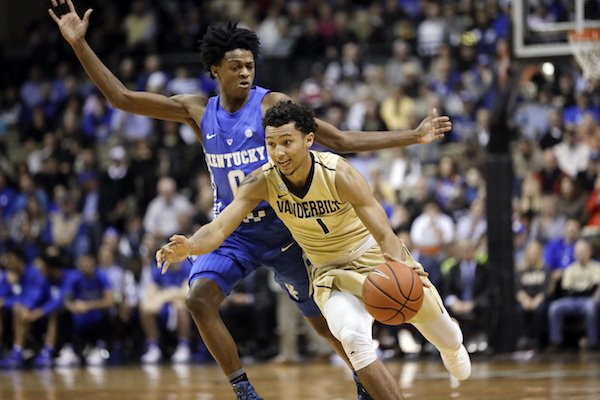 "I definitely was a Hogs fan growing up," said Willis, who starred at Fayetteville High School. "So I guess it'll feel kind of weird stepping in there and knowing I'm playing against them after cheering for them so many other times."

Willis is a freshman guard for Vanderbilt, which plays Arkansas at 7:30 tonight in Walton Arena.

"It should be fun playing in front of a lot of friends and family," he said. "I'm looking forward to it."

Willis played his first game against the Razorbacks two weeks ago when Arkansas rallied to beat the Commodores 71-70 at Memorial Gym in Nashville, Tenn. He had 6 points and 2 assists in 16 minutes off the bench.

"I know at our place he was really excited for the game," Vanderbilt Coach Bryce Drew said. "I can only imagine when he takes the court down there.

"It's emotional for him. That's his hometown."

Willis said he'll attempt to approach tonight like he does every other game.

"I think Payton will be fine," Fayetteville Coach Kyle Adams said. "He's very even-keeled. If he is a little extra juiced up, you won't be able to tell, I can promise you that."

"So I'm sure he'll come in and play a heck of a game," Anderson said.

Vanderbilt was among several notable programs that showed interest in Willis after he played well at an AAU tournament in Las Vegas the summer before his senior year at Fayetteville.

"That Wings team had a lot of coaches following them, and Payton went off in some of those games in Las Vegas and people took notice of his skill level," Adams said. "My phone started blowing up."

Willis committed to the Commodores after visiting Vanderbilt last fall and cancelled visits to Minnesota and Dayton.

"I just knew Vanderbilt was where I wanted to go to school," he said. "It felt like home."

"I wasn't upset about it because I knew Malik was their guy," Willis said. "They kept me on the back burner pretty much."

It's unclear whether Willis would have received an offer from Arkansas if he had waited to sign until the spring after he averaged 19.6 points, 5.0 rebounds and 3.9 assists per game as senior.

"I think he made a decision early on in terms of what he wanted to do," Anderson said. "That's the end of that."

Willis signed with the Commodores in the fall of 2015 expecting to play for then-Coach Kevin Stallings, who resigned after last season -- his 17th at Vanderbilt -- to become Pittsburgh's coach.

"I probably could have ended up going to Arkansas after Coach Stallings left," Willis said. "But I just wanted to stick with Vanderbilt."

Drew, hired from Valparaiso to replace Stallings, flew to Fayetteville to visit with Willis and his family last spring.

"I felt like I already was at Vanderbilt in the sense that I didn't want to go anywhere else and re-open my recruitment," Willis said. "Then Coach Drew came to visit and I knew for sure I was going to stay with Vanderbilt.

"Things went super smooth when we got to know Coach Drew. I really like his positivity."

"We feel like Vanderbilt is a really good fit for him and he's played well for us," Drew said. "He's a freshman, so there are some ups and downs as you go through the season, but his attitude and work ethic have been great."

Willis said he expected to contribute as a freshman after the Commodores lost guard Wade Baldwin, a first-round NBA draft pick by the Memphis Grizzlies.

"The best part about this season is all the experience I'm getting against so many good players," he said. "Being able to get out there and play against guys I've watched on TV."

Willis played against Monk -- his 7A West rival at Bentonville -- earlier this season when Kentucky beat Vanderbilt 87-81 at Memorial Gym. The Commodores and Wildcats play again Feb. 28 at Rupp Arena.

"It brought back some good memories from high school," Willis said.

Willis said he came up with 24 tickets for tonight's game, with the help of teammates, and that he expects to have about 30 family and friends in attendance.

"I couldn't get a ticket for everybody," he said. "But I got pretty close."

Adams won't be at the Arkansas-Vanderbilt game because the Bulldogs are playing Bentonville West tonight, which is a disappointment for him.

"I'm a big Razorback fan, but I'm a big Payton fan as well," Adams said. "I hope he does well. It'll be kind of mixed emotions for me.

"It's kind of weird, but we've been playing better and with more energy on the road," Willis said. "So we'll see what happens."