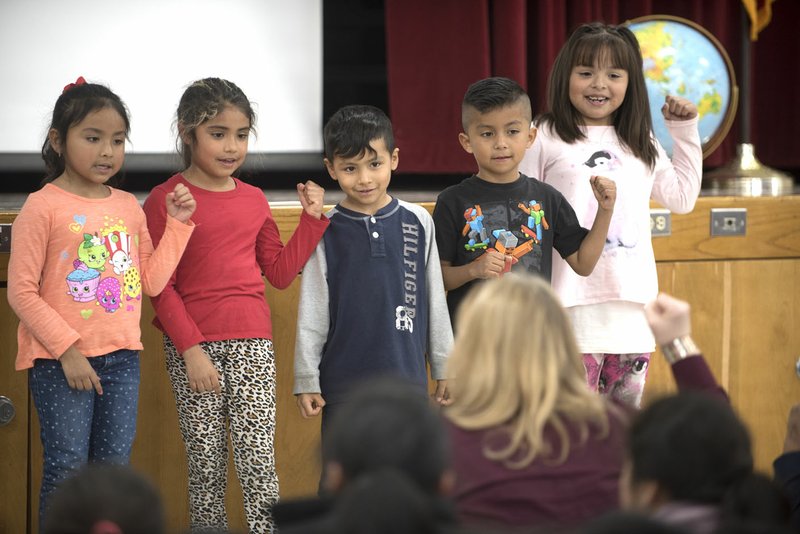 Kindergartners in the Springdale Walker Elementary School English Language Development program recite The Little Pigs Monday Jan. 30, 2017. Results of a proficiency exam for students learning English show new strategies schools are implementing are having an impact with 22 students graduating out of the program at the school Tuesday compared to less than 10 last year. ( J.T. Wampler)

SPRINGDALE -- The Springdale School District has seen a significant increase in the number of students exiting English-as-a-second-language programs this year.

This school year, 941 English learners have graduated from English-as-a-second-language programs, compared with just 391 students last school year, according to information from Mary Bridgforth, director of the programs for the school district.

Among students who no longer need language services are 22 children at Walker Elementary School. During a school ceremony last week, children shared with the audience of parents and teachers how the language development program helps them speak in complete sentences and add adjectives to their writing.

English language development is a structured time during the school day where children receive specific language instruction they don't get with their reading, writing and spelling lessons, Bridgforth said. Lessons include lots of time to talk. Children work with peers at their level, so beginning speakers are with other beginning speakers and more advanced children are with others nearing proficiency.

Walker is in its third year of providing English language development classes, Vernon said. The lessons teach children learning English the "mortar" of the language, or the little words necessary to fill in a sentence, Vernon said. One 10-word sentence from a worksheet -- There are lots of trees and plants in the jungle -- included just three vocabulary words, with the rest being those little words.

Students hear a mini lesson and then have time to practice the language while talking and writing during each English language development class, Vernon said.

One recent lesson was designed around fourth-graders taking an imagined trip to a snowy destination, she said.

In one sentence, students said, "While we were skiing, we saw deer grazing in the forest." Students understood "while" and "when" refer to events happening at the same time, Vernon said. One student told Vernon the lesson had an immediate effect of helping her understand a science lesson.

Vernon focused on literacy instruction as a beginning English-as-a-second-language teacher, but she noticed that practice with saying words, reading quickly and with accuracy and answering questions about making inferences didn't result in students advancing in reading, she said.

She has seen greater gains in reading with the addition of English language development curriculum, she said.

All children enrolling in Springdale schools complete a home language survey with seven questions, Bridgforth said. If the answer is yes to any question, federal law requires the district to test their English language proficiency. If a child isn't proficient, a Language Placement and Assessment committee decides if the child needs English-as-a-second-language services.

The state last year switched to a computerized exam, the English Language Proficiency Assessment for the 21st Century.

Exiting English-as-a-second-language programs requires students to earn proficient scores on both the English language proficiency exam and the ACT Aspire, Bridgforth said. They also need grades of C or higher in their classes and recommendation letters from two teachers.

Prior to offering English language development, language services varied from one school to the next, Bridgforth said. Many schools provided English-learners with extra support in literacy, but district officials realized a need to provide them with instruction on the basics of English, including verb tenses.

"That's language they're not going to learn outside the classroom," Bridgforth said.

Bridgforth has asked the district to continue the implementation, training and refinement of the language development programs for elementary and middle school students. She also plans to increase English language development services for junior high schools and high schools because of the lower levels of proficiency among eighth- through 12th-grade English learners.

Jennifer Hang has noticed improvement in her daughter's ability to speak English, she said. Fourth-grader Ethana Hang, 10, received her certificate for exiting the English-as-a-second-language program at Walker. Ethana speaks both English and Vietnamese, often speaking English to her father, Ken Hang, while communicating with her mother in Vietnamese.

Second-grader Alissa Carcamo, 8, was excited to finish the English-as-a-second-language program because she's already a fluent English speaker, said her parents Alex and Patricia Mejia, who speak English and Spanish.

Their daughter understands Spanish because of grandparents, who only speak Spanish, but Alissa primarily speaks English at home, Alex Mejia said.

Vernon has seen the difference the language development classes have made on students. One student who now regularly speaks up in class proudly told Vernon she planned to try out for a music program. The reason has stuck with Vernon.

The girl told Vernon, "I never thought I was good enough. I didn't think I could do it. I can do this. I'm confident."