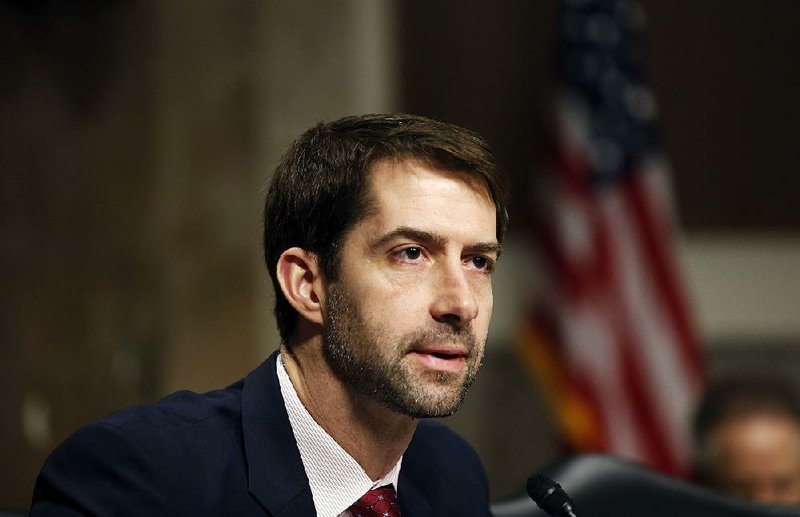 Called the Reforming American Immigration for Strong Employment Act, the measure would eliminate a lottery system that awards U.S. permanent resident cards to 50,000 people each year.

In addition, it would cap the number of refugees at 50,000 per year.

The proposal would prevent green-card holders and U.S. citizens from permanently bringing their foreign parents, siblings, and adult sons and daughters to this country.

The Republican from Dardanelle said the tighter restrictions will lead to higher wages for American workers, in part by slowing the flow of unskilled or low-skilled workers into the country. Only 6.7 percent of all legal immigrants are given employment-based visas, he said.

The legislation, which is still in draft form, "will be filed in the coming days," according to Cotton spokesman Caroline Rabbitt. Cotton is working with U.S. Sen. David Perdue, R-Ga., who will be the bill's co-sponsor.

At a news conference in the U.S. Capitol on Tuesday, Cotton predicted that his proposal would cut immigration by 41 percent the first year it is implemented and lead to a 50 percent reduction within a decade.

Over the past quarter-century, roughly 1 million legal immigrants per year have come to the United States, Cotton said. His proposal would cut that figure in half, he said.

Cotton told reporters Tuesday that wages for working Americans have been dropping for decades, and he placed some of the blame on the steady flow of foreigners.

Wages for high school graduates who fail to earn a college degree have fallen by 2.2 percent over the same period, the group said.

"There's no denying this generation-long surge in low-skilled immigration has hurt blue-collar wages. It's pulling the rug out from underneath them, and unless we reverse this trend, we're going to create a near-permanent underclass for whom the American dream is just out of reach," Cotton said.

The Diversity Immigrant Visa Program that Cotton seeks to eliminate is a lottery that sets aside permanent residence visas for people from countries that are deemed to have low levels of immigration to the U.S.

The lottery is "rampant with fraud, provides no discernible economic or humanitarian benefit and doesn't even promote diversity," Cotton said, noting that a substantial number of the lottery winners come from European countries.

The senator said the White House has expressed interest in overhauling the legal immigration system.

"I've discussed the legislation with President [Donald] Trump as a concept in the fall and as recently as this morning. He strongly supports the broad concept of moving ... our legal immigration system towards a merit-based system, as opposed to the unthinking system that we have right now that has unlimited chain migration and a needless diversity lottery and an uncapped refugee program," Cotton said.

The Federation for American Immigration Reform, a group that favors what it calls "common sense limitations on immigration," praised the Cotton-Purdue proposal.

"For far too long, America's immigration policies have been based primarily on nepotism, offering the lion's share of highly-coveted U.S. green cards to those with extended family ties in the U.S., without regard to their level of education, skills or ability to compete and contribute to our modern economy," group President Dan Stein said in a written statement. "The RAISE Act takes the first crucial steps to reform this antiquated selection process, reduce extended family chain migration, while insuring that nuclear families are kept intact."

Bob Sakaniwa, a lobbyist for the American Immigration Lawyers Association, said he had "a number of concerns" after hearing a description of the legislation.

"I think it would be very problematic to reduce the numbers [of legal immigrants] as suggested," he said.

The barriers to reuniting relatives "would undermine our core belief in keeping families together," he added.