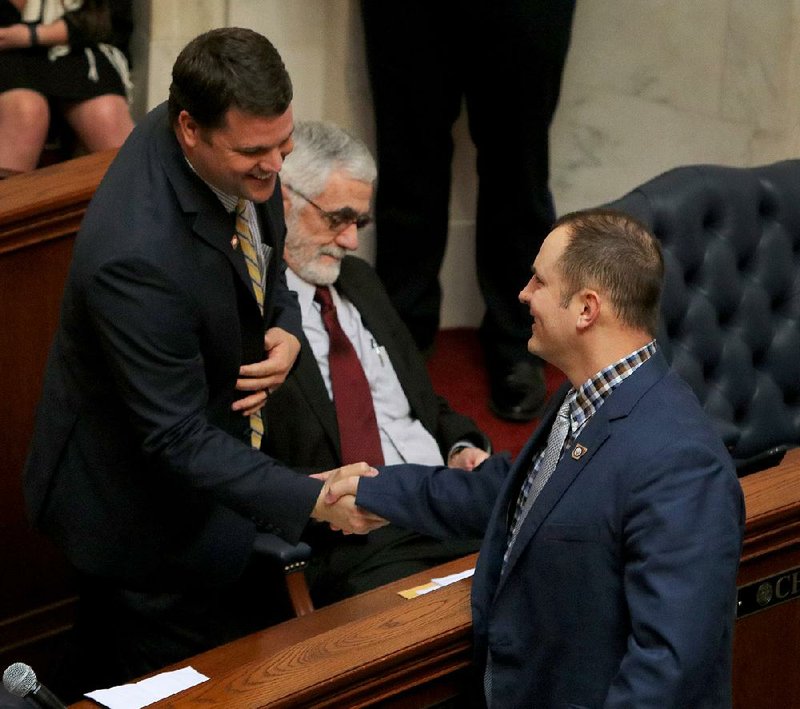 Sen. Bart Hester (left) is congratulated by Sen. Trent Garner on Wednesday after Hester’s bill to allow grocery stores to seek permits to sell wine from any winery was approved by the Senate State Agencies and Governmental Affairs Committee.

The Arkansas Senate on Wednesday narrowly approved a bill that would allow grocery stores in wet counties, including Wal-Mart Stores Inc. and Kroger Co., obtain permits to sell wine from any winery.

Under existing law, grocery stores can sell wines only from "small-farm wineries," those that produce less than 250,000 gallons or less a year, according to the state Alcoholic Beverage Control Board.

The Senate voted 18-11 to approve Senate Bill 284 by Sen. Bart Hester, R-Cave Springs, and send it to the House, after Hester answered questions from senators about it for several minutes and no senator urged his colleagues to reject the bill.

Eighteen votes are required for approval of the bill in the 35-member Senate.

Hester said he wasn't surprised that the Senate's vote on his bill was close.

Hester told senators that his bill would allow grocery stores to sell any wine that best meets their customers' wishes.

Some of the state's liquor store owners support the bill and others don't, he said.

"We are a free-market country. I am very confident that the small businesses of Arkansas will continue to find ways to be successful," Hester said.

Under SB284, a grocery store may apply to the Alcoholic Beverage Control Board for a grocery-store wine permit that would allow the store to purchase and sell wine for off-premises consumption at a single location.

Wine-inventory orders or purchases are required to be made by the store for delivery to a single permitted location. Under the bill, an order for an inventory of wine is barred from being combined with an order for another location in a way that would result in discounts.

Hester said 50 percent of the fees paid for the permits would go to the state Department of Parks and Tourism to promote wineries, and the other 50 percent would go into a grant program for Arkansas wineries.

Terry Benham, a lobbyist representing the Grocers Coalition that includes Wal-Mart Stores, Harps, Kroger, Edwards Food Giant, and Brookshire's grocery stores, said in an interview that "the grocers will not pursue any ballot initiative to try to bring liquor into the grocery stores or to expand this statewide ... if the liquor stores will be OK" with SB284.

"That is our position, and we will be solid on that position," he said.

Michael Lindsey, director of public affairs and government relations for Wal-Mart Stores, said Wednesday that "we think that this wine and grocery bill serves our customers better." He declined to comment further.

On Tuesday, Lindsey called it "a free-enterprise, fair-play, equal-opportunity bill."

"We don't think that the data suggests that this bill will close a liquor store," he told the Senate State Agencies and Governmental Affairs Committee on Tuesday.

Keith Emis, a lobbyist representing the Arkansas Beverage Retailers Association, which represents liquor stores, said Wednesday that it has been the association's historical position "to maintain the status quo in Arkansas with regard to alcohol policy" but the association now supports SB284.

"We recognize that society and markets change and evolve with time," Emis said in a written statement.

"The people of Arkansas can currently buy native wines and small farm wines in grocery stores. The current 'wine bill' being discussed does not expand the sale of alcohol beyond its current boundaries. It simply allows those currently selling a limited selection of wine to expand sales to all wine," he said.

Bruce Hawkins, a lobbyist representing the Conway County Legal Beverage Association of liquor stores, said in an interview that "we are not opposed" to SB284, because the results will be favorable for the association. He said it would be "a great idea" if the grocery stores agreed not to pursue ballot initiatives.

But a few liquor store owners said at Tuesday's Senate committee meeting that they opposed the bill and expressed frustration about the Senate committee considering the bill less than 24 hours after it was introduced.

"My position has been that this is an area that the parties seek some common ground," he said.

"Obviously, you are debating access to the consumers and easy access of these products through stores that they customarily shop at versus the traditional importance of our liquor and wine distribution centers through local outlets that are licensed and they have investments," Hutchinson said.

"So when you have those competing interests, I was counting on them communicating and talking and working out a consensus," he said. "I think they thought they had a consensus bill that they were presenting. We are continuing to monitor that. We are hearing from some people that have some concerns about it, so we'll continue to watch that as it goes through the process.

"But you've got to balance those two competing interests. The legislation tries to do that. We will see if it needs any modifications as it goes through the Legislature," Hutchinson said.